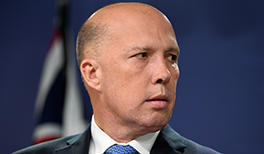 The Federal Court has quashed a 2017 decision by Peter Dutton to cancel the visa of a Maltese man who spent 25 years behind bars for murdering his wife in 1993.

The judgment said it was “more probable than not” Mr Dutton took no more than 11 minutes to cancel the visa of Frederick Chetcuti, 73, who has lived in Australia since he was a toddler.

Mr Dutton was the Minister for Immigration and Border Protection at the time, but his portfolio has since been expanded and renamed Home Affairs.

The material relating to Chetcuti’s visa status, which Mr Dutton was legally required to give “proper, genuine and realistic consideration to” ran to 130 pages of submissions and attachments.

However, it did not contain any material supplied by or on behalf of Chetcuti.

“The Minister paid so little attention to the material that he erroneously stated that he had given consideration to all the information [that] had been supplied by or on behalf of [Mr Chetcuti ] … when there was no such information,” the judgement read.

“If he had commenced his consideration in sufficient time to allow an active intellectual process to be directed to the relevant material, it is probable that he would have realised his error and corrected it.”

In a two-to-one decision judges Darryl Rangiah and Bernard Murphy upheld Chetcuti’s appeal and ordered that Mr Dutton’s decision to cancel his visa on character grounds, should be quashed.

The third judge, David O’Callaghan, dissented, saying he would dismiss the appeal.

Chetcuti spent 25 years in jail for killing his wife Gloria and, later, assaulting his cellmate.

During his 1993 murder trial it was revealed Chetcuti had, with his teenaged son in the car, followed his wife, forced her off the road, kidnapped her, battered her with a rock and dumped her in the Parramatta River, weighing her down with rocks until she drowned.

The sentencing judge said Chetcuti had been seriously contemplating killing her for “at least a couple of weeks” and that “he had acted in wilful defiance of a Family Court order by approaching her, and he had killed her because she was seeking relief against him in the Family Court and he feared that he might lose some of his property”.

Chetcuti was also sentenced to two more years in prison for assaulting his cellmate, after being asked to switch out the light at 3am.

In this latest case, he was appealing against a 2018 judgment by Federal Court Justice Steven Rares that upheld Mr Dutton’s August 2017 decision to cancel his visa.

In his judgment, Justice Rares said: “I find there is an ongoing risk that Mr Chetcuti will reoffend.”