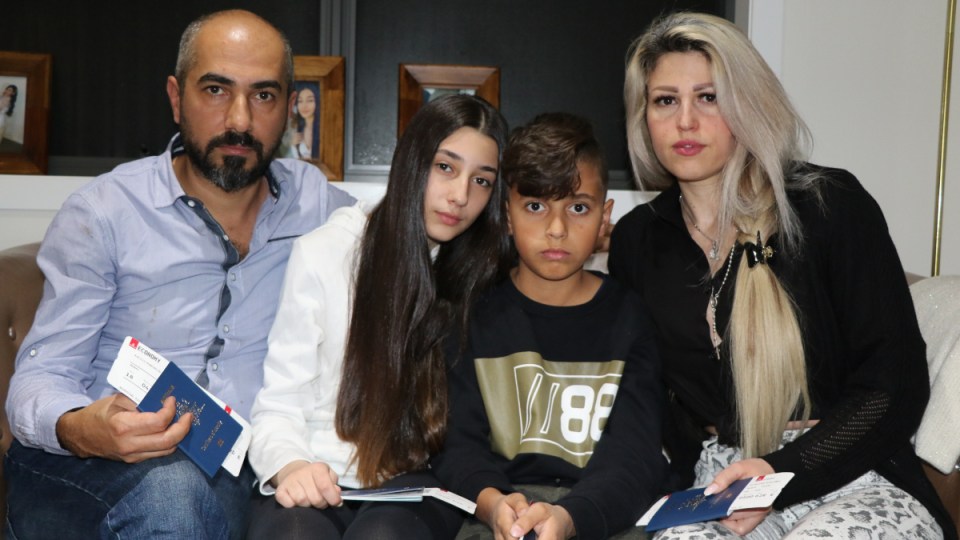 A Melbourne family has told how they were forced to spend 14 hours sitting at an airport boarding gate in a bureaucratic bungle which has highlighted confusion over how Australian permanent residents are dealt with at international borders.

Munzer and Diala Kassis said they spent all of their savings to travel with their two children Sabin, 14, and Rami, 10, to Italy – only to be turned around halfway there and sent back to Australia.

“He (Emirates boarding gate official) said it’s not an international passport … he shook his hand and he said ‘No, no you’re not going to Italy’,” Mr Kassis said.

Mrs Kassis and their children burst into tears.

The couple also claims they were treated with contempt by Emirates staff and feared they were being racially profiled because of their Syrian heritage.

The adults and children had to remain seated together on the floor of the airport, except for once when they were escorted to buy something to eat.

They said Emirates confiscated their travel documents and left them waiting for 14 hours for a new flight home, with staff shouting at them to “stop crying” and “whether you cry or whether you don’t, you’re going back”.

Mr and Mrs Kassis and their children became permanent Australian residents after fleeing war in their homeland in 2015.

They were granted a certificate of identity, which looks much the same as a passport, to go on holiday.

The certificates are granted in some cases including for people who, like the Kassis family, come to Australia as refugees and don’t have a passport from their birth country.

In correspondence with the Italian consulate, seen by The New Daily, Mr Kassis repeatedly checked before travelling to determine what further documentation the family would require to visit relatives in Italy. They were advised by the consulate, in writing three times, that they did not require a visa.

They left Melbourne with no troubles, flying Emirates, excited for their dream European trip.

But on a quick stopover in Dubai, on June 25, they were questioned by Emirates staff and blocked from reboarding for the second half of the journey.

In emails from the consulate in Melbourne, Mr Kassis had been assured he would be welcomed on Italian soil without a visa.

“If you hold a travel document (Geneva Convention of 28 July, 1951) issued by the Australian government, you will not need a visa to travel to Italy,” one email read.

Australian passport holders are allowed to travel visa-free to Italy if they stay for under 90 days.

But the rules differ for permanent residents holding Australian travel documents, depending on their country of citizenship.

The New Daily contacted the Department of Home Affairs to clarify the requirements, but was told on Monday: “Questions about Italian visa requirements should be directed to Italian authorities”.

Mr Kassis had thought he was doing the right thing by contacting the Italian consulate as instructed, and was repeatedly reassured by consular officials.

He said he tried to show the written authorisation to Emirates staff, but the attendant refused to look at the letters.

Back home, family friend Renee Mazloum was frantic. She immediately phoned the Italian consulate, who referred her to the Department of Foreign Affairs and Trade. She dialled its emergency number and spoke with an employee there who, Ms Mazloum said, confirmed that the family was carrying the required travel documents.

The employee then contacted the Australian consulate in the United Arab Emirates and informed Ms Mazloum that they had begun negotiating with Emirates.

Ms Mazloum said the employee rang her back saying, “I’m so sorry, we’ve tried our best … but we cannot force an airline company which passengers to board on a flight and which passengers not to.”

Ms Mazloum said: “They were human in Melbourne and now they’re just Syrian in Dubai.”

Not only were Mr and Mrs Kassis left embarrassed and humiliated by the alleged treatment in the Dubai airport, the family is now more than $8000 out of pocket.

They wonder who should be accountable for their lost money and the trauma they suffered.

They are also speaking up to highlight what they see as a flaw in the processing of refugees who wish to holiday outside of Australia.

Emirates told The New Daily it believed the family did not have the correct travel documents. The airline told the family it would be investigating the complaint.