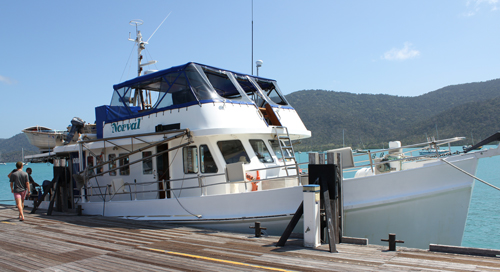 The overturned boat is believed to be the MV Norval. Photo: Norval Charters

Fourteen people, all believed to be from the same family, have been rescued after their boat caught fire and overturned off the coast of Gladstone on Monday morning.

They climbed into a tinnie to escape the flames, only to be thrown into the water when it capsized, police say.

Thirteen people who were involved in the “marine accident” were rescued by Water Police and a 14th person was winched to safety by a rescue helicopter.

The 74-year-old man on board the helicopter was treated for exhaustion and hypothermia. Queensland Ambulance said he was taken to Gladstone Hospital.

#GladstoneUpdate2 – 13 patients are on a vessel making their way back to land for further assessment by paramedics. One stable patient is on-board Rescue 300 helicopter en-route to Gladstone Hospital after being treated for exhaustion and hypothermia.

Two other men were also taken to hospital with minor injuries.

Paramedics say the other 11 people escaped without injury after the boat fire some 20 nautical miles off Gladstone on Monday morning.

It is understood the boat was the MV Norval, which overturned and caught fire about 9am at Rock Cod Shoal.

The boat’s owner, Ron Murphy, operates a charter business out of Gladstone and said the occupants were all members of the same local family.

“It was supposed be a trip where the whole family could get together and spend some time in a loving, family atmosphere,” he told the ABC.

The MV Norval is an 18-metre vessel that can cater to 11 passengers with three crew.

The vessel’s usual skipper was piloting the vessel with his own family on board.

The 14 people being transported by water police will be assessed by paramedics once they have returned to shore.

Two helicopters were earlier sent to the scene.