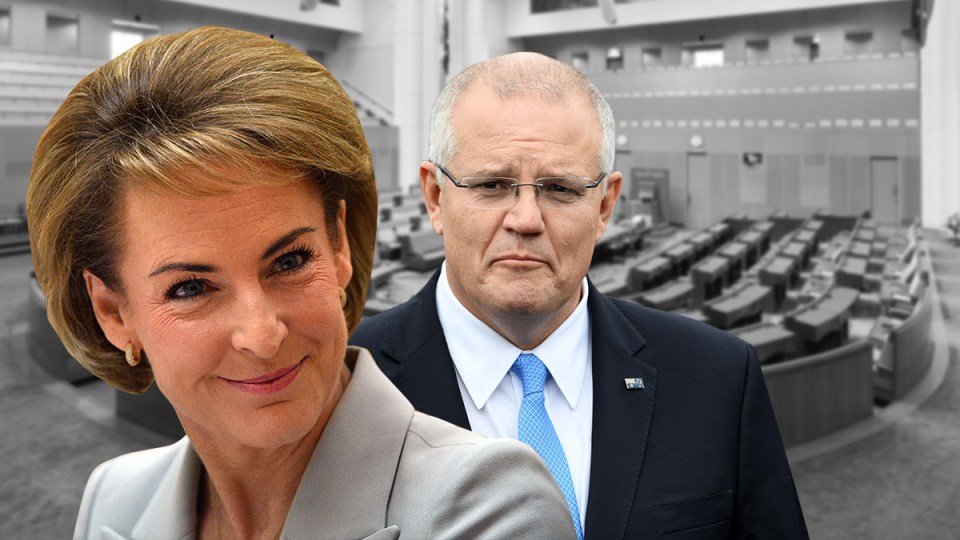 While we've been distracted by Labor's mess, Morrison's government – including Michaelia Cash – have been flying under the radar. Photo: TND
analysis

It’s been hard to look away this week from the train wreck that is John Setka’s refusal to resign from his union leadership position in the CFMMEU over domestic violence charges and alleged comments about anti-violence campaigner Rosie Batty.

But look away we must, for the reinvigorated Morrison government has been making the most of the time while voters are gawking at the messy spectacle.

We should instead be focusing on at least two commitments made by the PM before the election that have proven to be outright porkies.

The first was that the $1080 tax cut would be delivered from July 1 this year. As The New Daily revealed earlier this month, Mr Morrison knew when he called the election that Parliament would most probably not be called back in time to pass the necessary legislation before his promised start date.

It has since been announced that Parliament will resume on July 2. However, the exact timing on the tax cuts won’t be known until the government can convince either the Labor opposition or four senators on the crossbench to support the legislation.

The PM’s second porky was just as audaciously faux. Challenged in one of the election Leaders’ debates to state he would keep his gaffe-prone environment minister Melissa Price, Mr Morrison said he would.

To be fair, the PM probably thought at the time that he’d never be tested on the promise, given he would soon be in opposition and in no position to ‘keep’ any minister.

Nevertheless, when the miracle occurred and Mr Morrison came to form his second ministry, he appointed a different environment minister –Sussan Ley – and shunted the former one to the ministerial B team. And in doing so, proved another of his election commitments to be a lie.

The two mistruths are relatively minor misdeeds, but our seeming lack of interest in their exposure suggests we don’t care if politicians are not held to account.

The same goes for other senior Coalition ministers who’ve re-emerged with little scrutiny due to our distraction with the dramas unfolding for Labor and the union movement.

Michaelia Cash, the former industrial relations minister still under a cloud due to the media being tipped off about a police raid on union offices, stepped out this week in her new role as employment minister to welcome the latest approval granted to the Adani coal mine.

Senator Cash also took a free kick at Opposition leader Anthony Albanese for acting against Mr Setka but doing nothing about Labor continuing to accept donations from the CFMMEU.

Another embattled minister to emerge ‘under cover’ was Angus Taylor, the energy minister who’s now been given additional responsibility for carbon emissions reduction, which was taken away from the new environment minister.

In recent times Mr Taylor has been under pressure to explain his connection to a company based in the Cayman Islands that received $80 million for a water purchase when Barnaby Joyce was the agriculture minister. He’s also been pilloried for parroting the PM’s claim that Australia is ‘on track’ to meet its emissions reduction targets under the Paris agreement.

Like Senator Cash, Mr Taylor used the Setka imbroglio to call for Labor to sever its ties with the CFMMEU, and also reignited debate over whether government should have the power to deregister militant unions.

At the same time, Mr Taylor was trying to avoid talking about his own disaster, the latest official data on Australia’s carbon emissions, which unsurprisingly show that our emissions have been steadily growing since the carbon price was scrapped.

Finally there’s the new Environment Minister Ms Ley, who you might remember resigned as health minister in the Turnbull government over the use of a taxpayer-funded car to attend a private property sale.

This might have something to do with water being a red-hot issue in Ms Ley’s electorate, resulting in a 7 per cent swing against her on election day.

At least two lies, made in haste and not yet repented at leisure. And at least three ticking timebomb ministers, who either have an unresolved issue hanging over them or look set to kick a hornets’ nest.

These are the political dramas that we should be watching. Closely, and relentlessly.