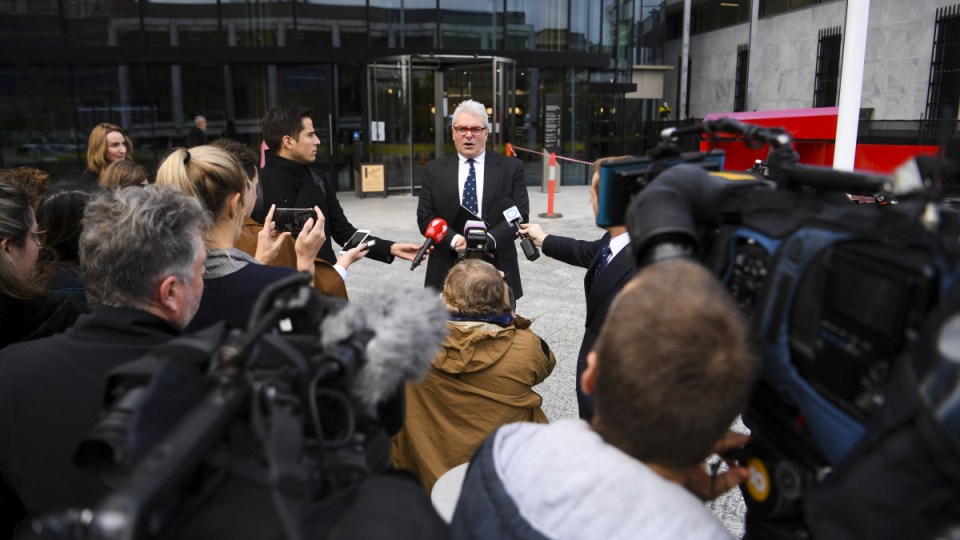 The government has delayed a case against a former Australian military lawyer, charged over the leaking of sensitive documents to ABC journalists, while it works out how to deal with the secret information in court.

David William McBride, 55, was committed to stand trial in May on a charge of theft of commonwealth property, three counts of breaching the Defence Act, and the unauthorised disclosure of information.

The leaks were to journalists Dan Oakes, Andrew Clark and Chris Masters, who produced the 2017 investigative report The Afghan Files.

The story examined incidents between 2009 and 2013 when special forces allegedly shot dead insurgents and unarmed civilians, including children.

At a directions hearing in the ACT Supreme Court on Thursday, lawyers for the Commonwealth and Crown asked for an adjournment so they could work out how the sensitive information involved would be dealt with in court.

The case was adjourned for a fortnight, until June 27.

Speaking outside the court, Mr McBride said everything involved in the case was classified secret.

He has pleaded not guilty to the charges and maintains it was his duty as an army officer to reveal what he saw as wrongdoing.

“My defence is that it is an army officer’s duty to rebel against an unjust and illegal and immoral regime,” he said.

He says he was appalled by what he saw in Afghanistan.

“I’ve been to the killing fields in Rwanda, I’ve been to Afghanistan under the Taliban. What I saw in the Australian government in 2013, and the leadership of the ADF, was worse than anything I’d ever seen in my life,” he said.

“It was disgusting and once every Australian hears about it and understands the implications, you would be sickened … you would be ashamed to be an Australian.”

While he would prefer media reporting on the trial be allowed, Mr McBride believes having a closed court could benefit his case because it would allow him to share frankly what happened in Afghanistan, and in cabinet meetings and with Defence leadership.

“I think what I did was my patriotic duty to stand up for what’s right about this country and therefore I’m happy, to make sure there’s no accusations of me breaching national security, to have a closed court,” he said.

“None of it is about our secret mind-reading powers, it’s all about what happened 10 years ago on a mountaintop in Afghanistan and what happened across the lake in parliament.

“The eyes of the world are on us now to look very closely at what we have done under the euphemism of national security.”

Mr McBride was arrested by federal police at Sydney airport on his way to his new home in Spain in September 2018, after returning to Australia briefly for a father-daughter school dance.

Police had raided his home in February 2018, armed with a search warrant looking for information relating to the ABC journalists, military files and the news stories.

Mr McBride served for nearly six years with the British Armed Forces before serving in the Australian Defence Force from 2008 to 2017, and completed two tours of Afghanistan.

He was medically discharged in 2017.