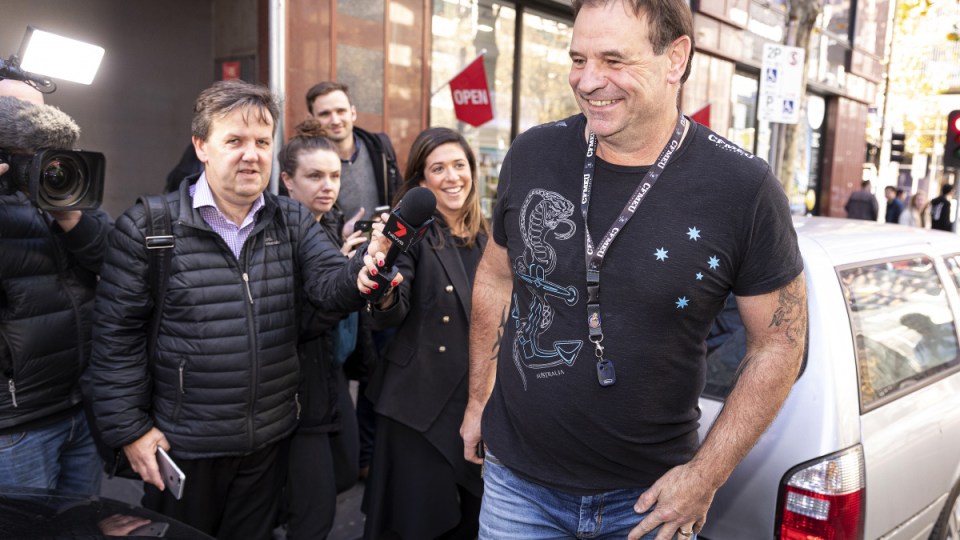 John Setka applied for an injunction to the Supreme Court to stop the expulsion vote. Photo: AAP

ACTU secretary Sally McManus has failed to secure the resignation of union leader John Setka at talks in Melbourne, confirming the movement will need to “blast him out” of his $200,000-a-year job.

For the first time, Ms McManus publicly called for Mr Setka’s resignation on Thursday, but the ACTU has no formal power to remove him from the role.

For that, the Construction, Forestry, Maritime, Mining and Energy Union (CFMMEU) might need to wait until he pleads guilty to using a carriage service to harass a woman by sending vile text messages.

Under union rules any member could then charge Mr Setka with bringing the union into disrepute – but that is likely to be a long legal process.

Earlier on Thursday afternoon, the CFMMEU Victorian secretary emerged from a 90-minute discussion with Ms McManus, telling reporters he had no intention of resigning.

As I said in my press conference yesterday, I will not be stepping down as secretary of the CFMEU.

“Today I met, and had a long and frank discussion, with John Setka. I told him it is in the best interests of the union movement that he resigns,” Ms McManus said.

“I have consulted a wide range of union leaders and they share this view.

“There are several matters currently before the court. If media reports are correct, the allegations John is facing are serious. I also note that yesterday John said he would plead guilty to charges of harassing a woman using a carriage service.

“I have previously said that if these allegations are correct, they are totally unacceptable. There is no place for perpetuators of domestic violence in leadership positions in our movement.”

As the union movement prepares to fight a fresh attempt by the Coalition to introduce new laws to make it easier to deregister unions and develop a “fit and proper persons” test for union leaders, the ACTU remains deeply concerned the drama could tip the balance in favour of the reforms.

“The current federal government will use any opportunity to impose further anti-democratic, anti-worker laws on all union officials and all unions – it is clear they will try and exploit this situation for their own ends.

“These laws will make it harder for ordinary working people to receive fair wages and conditions. We must oppose these laws.”

Meanwhile, Labor leader Anthony Albanese is also facing growing push back from unions for his separate attempts to kick Mr Setka out of the ALP over his alleged remarks about anti-violence campaigner Rosie Batty.

Mr Setka maintains those comments were taken out of context. He insists he was explaining what lawyers had told him about family violence laws and recent changes following Ms Batty’s campaign, and was not attacking her work.

If Mr Setka chooses to fight expulsion from the ALP, he would have strong grounds to do so, according to Labor sources.

“There are already people trying to undermine him in the union movement. The Labor Party still, to this very day, has taken million of dollars from the CFMMEU,” he said.

“Mr Albanese won’t stand up and say they won’t take any donations from the CFMMEU. Of course, they’ll continue that because they want the cash.”

Setka remains defiant as ACTU publicly calls for him to quit