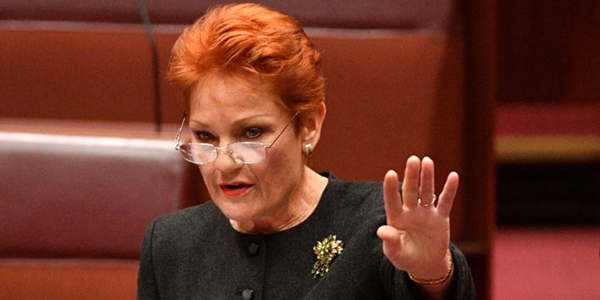 Pauline Hanson says other issues should be prioritised – and has provided a list.

Pauline Hanson is threatening to block Prime Minister Scott Morrison’s tax cut package in the Senate, which could trigger delays to promised $1080 tax cuts from July 1.

While there is broad support from Labor and the crossbench for the first stage of the Morrison government’s tax cuts, the Prime Minister is insisting on the Senate voting on the full package including ‘Stage 3’ tax cuts in 2024.

Despite claiming during the election that there would be no delays to the $1080 tax cuts – and that the Australian Tax Office could “administer” them if Labor supported them – the Prime Minister appears to have retreated from that claim and the Treasurer now accepts legislation is required.

Because the Labor Party will only support the tax cuts for low and middle income earners, the fate of the proposal lies with the crossbench and Pauline Hanson’s position is pivotal.

But the One Nation leader said today she was not supporting the 2024 tax cuts – yet.

“At this stage, no I’m not,” she told the Nine Network this morning.

“We’re talking about $158 billion over the next few years. I think there’s more important issues out there that are of concern to the Australian people.

Senator Hanson also raised one idea the government could seek to use to bargain with her with – a royal commission into the Family Court.

“Another thing that’s important to the people is having a royal commission into family law and child support. Men are suiciding daily and women are being murdered,” she said.

“Tax cuts? No. It’s important to get these other things on the agenda first and foremost.”

Senator Hanson has been furious with the Prime Minister after he declared the Liberals would put One Nation below Labor on how-to-vote cards after the members of her party were filmed threatening to water down Australia’s gun laws in conversations with American gun lobbyists in the documentary ‘How to Market A Massacre’.

But she also has a history of opposing government tax cuts in the Senate and then backflipping to support the Coalition.

While the Senate count has not been finalised, the Coalition is expected to hold 35 votes, which means it needs another four votes to to reach a Senate majority of 39.

The Greens are opposed to the full package of the Prime Minister’s $158 billion tax cuts, arguing the lion’s share goes to high income earners from 2024.

The Australia Institute has released new modelling today arguing that nation’s top income earners will secure more $33bn in benefits from the plan – more than the pharmaceutical benefits scheme over the same period.