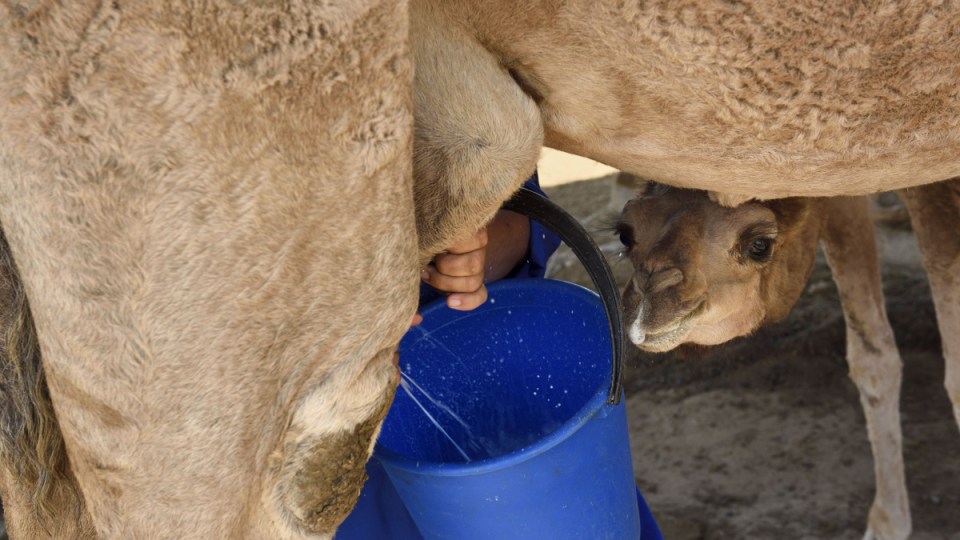 Camels are more likely to produce milk when their baby calves are around them. Photo: Getty

Australian dairy farmers are branching out into surprising new industries as they search for ways to overcome recent hardships, with some switching to an unlikely new venture: Camels.

As demand for nutrient-rich camel milk grows around the world, more and more dairy farmers are identifying the benefits of swapping from cows to tap into an in-demand niche in the global health market.

It’s a fledgling industry at the moment, but dairy owners who have already boldly switched to camels believe diversifying will hold them in good stead for the future.

Government reports into the industry have predicted huge increases in Australian camel milk production between 2016 and 2021, with farmers investing in large-scale herds.

There are at least eight camel farms in Australia today, producing not just drinking milk but also a range of other products such as soap, chocolates, feta and skin care creams.

Some are also banking on the curiosity of tourists, opening farms for tours and camel rides.

Australian Camel Industry Association co-founder Lauren Brisbane said she was inspired to investigate new ways to produce milk after witnessing the suffering of Queensland dairy farmers during the drought in the 1990s.

“I thought, there has got to be an animal that’s better than this that will work well on our vast landscape,” Ms Brisbane told The New Daily.

“That’s when I came across camels.”

Over the past decade, the dairy industry has suffered a series of devastating blows.

Desperate to find an alternative, Ms Brisbane founded the world’s first organic camel dairy farm, QCamel, in 2014 – and she hasn’t looked back.

Part of the reason is because unlike cows, camels are built to withstand harsh and diverse environments like those found in Australia.

“Camels grow fat in drought… and they can live until they are nearly 50 years old,” Ms Brisbane said.

Indeed, they seem to thrive; it’s estimated that there are about 1.2 million feral camels living in the Australian outback.

That could mean big business for the nation’s dairy farmers. Demand for camel milk in Asia and the US is growing amid beliefs about its health benefits, including for helping people with autism and diabetes (the research is ongoing).

What’s the downside of milking camels instead of cows?

Producers agree there are still many humps to get over to expand the industry.

For one, Australians might not be ready to swap from cow’s milk. A 2016 research paper by the federal government found that there was still a long way to go to change attitudes.

“There is a current perception amongst some potential consumers that camel equates to feral and dirty,” the report read.

Hitting consumers at their hip pocket is another major pain for those trying to get the industry further off the ground. Camels produce only a fraction of what a cow will produce, making the milk a lot more expensive.

It means the liquid has to come at a top price: One litre of camel milk usually retails for about $17 to $20.

Megan Williams, co-founder of The Camel Milk Co in the Victorian town of Kyabram, said the cost of camel milk production was extremely high compared to dairy cows.

She said a cow could produce about 25 to 40 litres per day, while a camel could only produce around five or six litres.

“They eat just as much as a dairy cow, but we get about a quarter of what a dairy cow produces,” Ms Williams told The New Daily.

“While it’s true that camels are drought-resistant, pretty tolerant in dry, harsh conditions and can go days without food and water, if they’re lactating and need to produce milk daily then they still need to be fed regularly.”

But the Williams family has found the rewards to be worth the challenges. Ms Williams said farming camels had opened up business opportunities she had never previously explored.

Diversifying has helped the family to create income in other ways: For example, visitors can tour the farm or take a guided camel ride.

“People are really receptive to camel milk and it has become a lot more mainstream,” Ms Williams said.

“We’re getting the name of camel milk out there, so that’s really positive.”