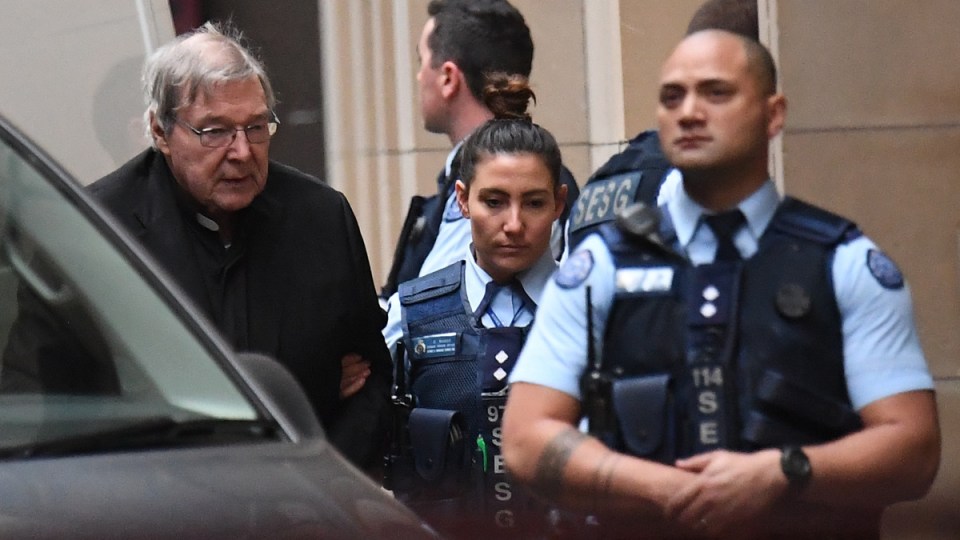 George Pell arrives at court for the second day of his appeal. Photo: AAP

The testimony of a choirboy regarding sex attacks inflicted by George Pell was “moving” and must be believed, the Cardinal’s appeal hearing was told Thursday.

On day two of the tense hearing at Melbourne’s Supreme Court, Christopher Boyce SC, the crown’s senior prosecutor, told the three judges overseeing Pell bid to be freed from jail that the accuser was telling the truth.

He said a key exchange in the re-retrial last year between Pell’s then barrister Robert Richter QC and the man, who cannot be named for legal reasons, particularly highlighted the genuine nature of his evidence.

Pell, the former treasurer of the Vatican, was found guilty in December on five counts of sexual abuse against two 13-year-old boys in he sacristy of Melbourne’s St Patrick’s Cathedral in 1996.

At the trial, Mr Richter asked the witness why he didn’t speak to the other choirboy about the attack in the cathedral.

“The responses you see there … you see in the manner in which they are delivered and at the end of those he puts down his pen and stares blank at the screen and is moved,” Mr Boyce said.

However, at times the day proved to be a challenging fightback against the points passionately raised on Wednesday by Pell’s legal team, who are arguing the conviction is “unsafe and unsatisfactory”.

Mr Boyce made an error in the first part of the morning by accidentally naming the surviving accuser. Justice Ferguson had to remind the barrister the hearing was being live streamed on the internet but said there was a delay and the name fortunately had not been broadcast.

The barrister also stumbled at times, could not be heard by reporters in the courtroom, forcing them to leave to a media room with the live feed, and at one point apologised to the judges about his submission saying: “The point I’m making … and not making extremely well.”

Some court reporters speculated Pell may have been smiling slightly in the dock.

However, Mr Boyce strongly rejected the argument made on the first day by Pell’s barrister that the conviction after a re-trial in December last year was an error by the jury.

The 77-year-old Cardinal sat writing notes in Court 15 during the hearing, surrounded by armed guards.

Mr Boyce went on to argue that witness testimony from cathedral staff  including master of ceremonies Charles Portelli and caretaker Max Potter – that suggested Pell was never alone in the time period of the alleged attacks after Sunday mass – was not necessarily reliable.

He made the assertion for a number of reasons, including the long passage of time since the incident, and the suggestion that they may have been being purposely helpful to the defence.

Mr Boyce argued the accuser was “taxed on everything under the sun” by Mr Richter, one of Australia’s leading defence barristers, who is known for his forensic and fierce questioning.

“And this witness dealt with it willingly and with patience … things he got wrong he would concede.”

Asked by the judges why the abused choirboy never told anyone about the attacks at the time, Mr Boyce suggested he “just wanted to get on with his life”.

“It’s perfectly, perfectly reasonable for a boy to just want to get on with his life,” he added.

Speaking in the court packed with Pell’s friends and relatives – as well as advocates and supporters – the barrister also pointed out the choirboy had a scholarship to exclusive Melbourne school St Kevin’s College that he didn’t want to risk losing, and that his parents were also divorcing.

“It’s [also] so embarrassing though, so incredibly embarrassing … is that something you want to talk to your friends about?,” Mr Boyce asked.

Justice Weinberg told the barrister that relying on the testimony of the accuser wasn’t enough on its own, pointing out that it “needed to be tested”.

During later discussion regarding the second incident the Cardinal was charged with, pushing the surviving choirboy up against a wall and squeezing his genitals, Justice Maxwell suggested it was “wildly improbable that the archbishop wouldn’t have been seen”.

The second choirboy involved in the attacks died in 2014 of a drug overdose.

Pell has been held in solitary confinement at Melbourne Assessment Prison since he was remanded in February this year. When he was sentenced to six years in March he was told he was eligible to apply for parole after three years and eight months.

At the end of the hearing Pell was taken from court by guards to return to prison after the judges in his appeal said they would “reserve” their  decision for a later date yet to be confirmed.

Investigative journalist and writer Lucie Morris-Marr has covered the entire Pell case for The New Daily. Her forthcoming book, FALLEN – The inside story of the secret trial and conviction of Cardinal George Pell, will be published by Allen & Unwin in September.