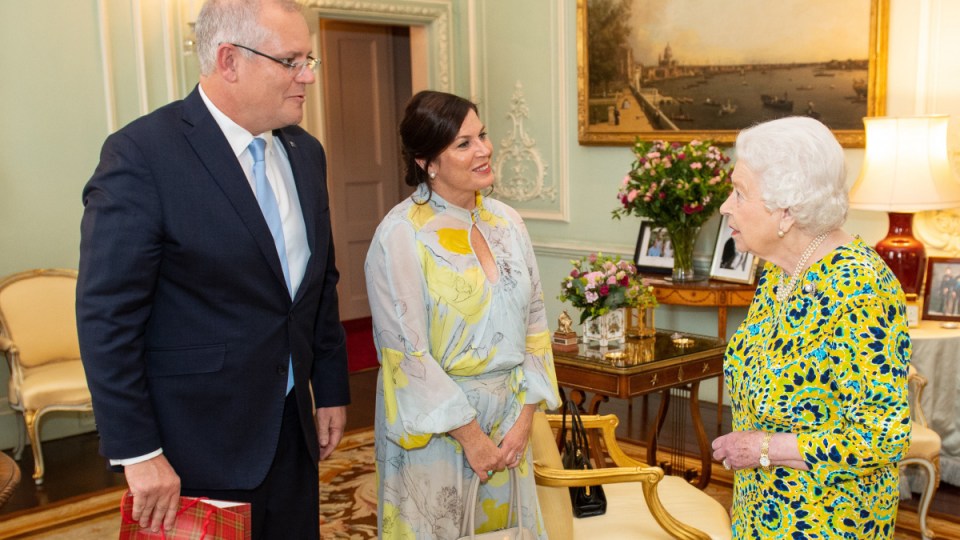 PM Scott Morrison and his wife Jenny with the Queen at Buckingham Palace in June 2019. Photo: AAP

Prime Minister Scott Morrison gave the Queen a signed copy of the official biography of champion racehorse Winx during his first meeting with the monarch at Buckingham Palace.

Her Majesty held an audience with Mr Morrison and wife Jenny in their first meeting since he was elected Prime Minister last month.

Earlier, Mr and Mrs Morrison also met Prince Charles at Clarence House, and the Prime Minister delivered a speech to the Australia-UK Chamber of Commerce.

In his speech, he outlined the desire for Australia to form a free trade agreement with Britain following its delayed exit from the European Union.

The Prime Minister told the Queen the couple had just arrived from a stopover at Solomon Islands on the way over from Australia, before both of them joked that it “wasn’t quite on the way”.

“It was an important visit to meet the new prime minister [of the Solomon Islands, Manasseh Sogavare],” Mr Morrison said, adding that they sent on their regards to the Queen.

“Oh that’s very kind of them,” she replied, before inviting the couple to sit down with her.

Mr Morrison also presented her with a copy of Winx: Greatest of All Racehorses, signed by author Andrew Rule as well as the owners of the thoroughbred.

In his speech to the Australia-UK Chamber of Commerce, Mr Morrison urged other countries around the world to come together to combat violent extremism and prevent trade wars.

Mr Morrison is in Europe to commemorate the 75th anniversary of the D-Day landings on Wednesday. He will meet outgoing British Prime Minister Theresa May, US President Donald Trump, German Chancellor Angela Merkel, French President Emmanuel Macron and Canadian Prime Minister Justin Trudeau at an event at Portsmouth, the port of departure for much of the invasion fleet.