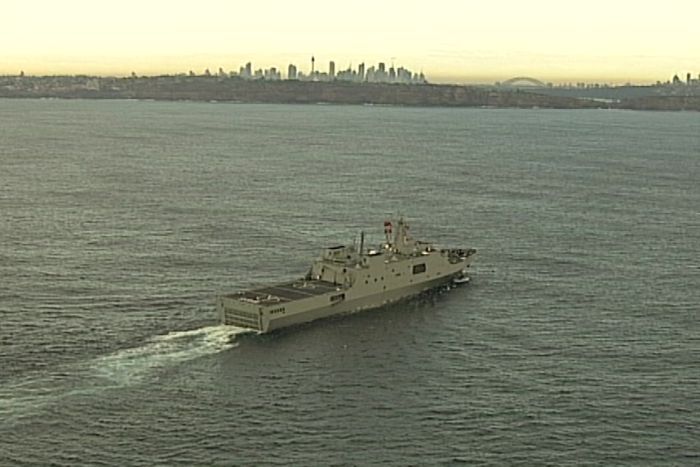 The vessels will be in Sydney for three days. Photo: ABC

Three Chinese warships have arrived in Sydney Harbour for a visit that was not publicly announced by the Government.

A People’s Liberation Army frigate, an auxiliary replenishment ship, and an amphibious vessel are docking at Garden Island for a four-day stopover.

The visit comes just a week after the ABC revealed Chinese warships had recently followed the Australian Navy during a transit of the South China Sea.

Prime Minister Scott Morrison said the arrival of the warships had been planned for some time.

He said it was a “reciprocal visit” as Australian naval vessels had visited China.

“[The Chinese vessels] were returning from counter-drug-trafficking operations in the Middle East and that is a further demonstration of the relationship we have.”

The Australian Defence Force is yet to respond to the ABC’s questions about the visit.

National Security expert at the Australian National University, Rory Medcalf, said the claim about the ships being on their way back from the Gulf of Aden was confusing.

“Sydney is hardly a convenient stopover on their way home … this looks like a serious show of presence in the South Pacific,” he tweeted.

“Chinese naval visits to Australia have more typically been a lone frigate, not a task group with an amphibious assault ship and 700 personnel.”

The interaction with the Chinese military during a recent transit of the South China sea was “professional” and “friendly”, according to the ADF.

HMAS Canberra was followed as it passed through the contested waters near islands controversially claimed by Beijing.

Air Commodore Richard Owen said he had no “extra worries” about the engagement.

“We were sensitive to all Navy interactions. We train for that, we’re aware of how they will behave and how we behave, so I had no extra worries about it at all,” he said.

“I was confident in the capabilities of the Royal Australian Navy and the ADF.”