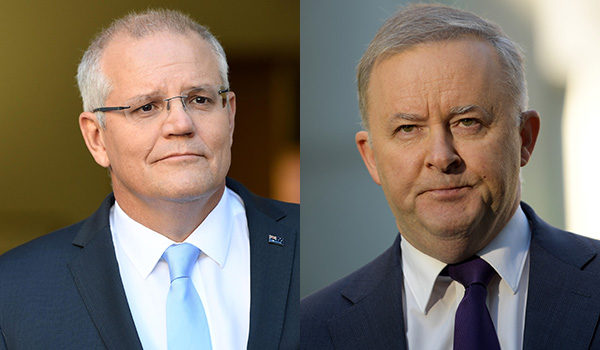 Scott Morrison and Anthony Albanese have announced their ministers and spokespeople. Now it's time to watch the fireworks. Photos: Getty

The first big test for Mr Albanese is Labor’s stance on tax cuts.

When Parliament returns, the government will introduce legislation not just for the $1080 tax cuts due on July 1, but also for future tax cuts planned for 2022 and 2024.

At this stage, Prime Minister Scott Morrison has made it clear he won’t split the bill, leaving Labor to decide whether it will wave through the entire $158 billion package, including tax cuts for the “top end of town”.

Or, leave it up to the crossbench in the Senate. That could see the $1080 tax cuts delayed until either the PM or Labor blinks.

With both parties now showing their cabinet hands, here’s a rundown of the top-10 match ups to watch.

Labor’s newly appointed shadow treasurer, Jim Chalmers, pledged he was “spoiling for a fight” on the economy on Sunday, but there’s no doubt his opposite number, Treasurer Josh Frydenberg, will be holding the ALP to account for its failed election policies.

Dr Chalmers replaces Chris Bowen, who has moved to the health portfolio.

As Labor’s former finance spokesman, Dr Chalmers, 41, will be under pressure in Parliament over his support for reforms dubbed “the retirees tax” by the Liberals. Everything is now on the table for review.

“Now the task for all of us is to rebuild and refresh our economic policies for the future,” Dr Chalmers said. The father of three is regarded as a rising star and a future Labor leader. He was touted as a candidate for deputy leader but withdrew from the race.

If you’re looking for the Muhammad Ali versus Joe Frazier fight of the new Parliament – this is it. The only problem is they are in different chambers, with Kristina Keneally in the Senate.

Like all good boxing matches, the Home Affairs Minister was quick with the trash talk. “It’s pretty much a hospital pass,” Mr Dutton said on Sunday. “Kristina Keneally is against Operation Sovereign Borders. She’s opposed to turnbacks. She’s opposed to offshore regional processing.There is nobody less qualified on border protection in the Labor Party than Kristina Keneally.”

During the election, Senator Keneally described Mr Dutton as “the most toxic man in politics”.

Ms Keneally told The New Daily she planned to apply “a blowtorch” to Mr Dutton’s administration of the portfolio. Of course, the body count is still fresh from the three Labor blokes who had to make way for the meteoric rise of the former NSW premier.

On last count it included the South Australian deputy Senate leader Don Farrell, who was forced to relinquish his job last week, NSW Labor frontbencher Ed Husic, the only Muslim man in Parliament who volunteered to go to the backbench to deliver a NSW Right faction spot for her to enter the ministry, and Queensland’s Shayne Neumann, who was dropped to the outer ministry from cabinet.

Will Mr Dutton will be next? Labor can only hope.

At first glance this combination would appear to be a giant sleeping pill. Labor’s deputy leader Richard Marles has all the killer instincts of a much-loved family labrador and he’s not even in the same chamber as Brigadier Linda Reynolds, who is in the Senate.

They are no doubt destined to bump into each other at military parades across the nation. Like Mr Marles, Senator Reynolds comes across as a nice person not naturally suited to political warfare. The former army reservist can waffle and go off track during media interviews, most infamously on Q&A when she once baffled the television audience by responding to a question about the Christchurch massacre by saying the Medevac bill for asylum seekers made her “almost physically ill” because she “lived through terrorism and the Bali bombings”.

The response prompted host Tony Jones to ask her if she was linking refugees with terrorism.

Labor’s former treasury spokesman can expect to be the subject of withering attacks in Parliament over his party’s tax and spend economic agenda. But he was quick to relish his new task of fighting for Medicare.

“Medicare is one of Labor’s greatest achievements. Protecting and nurturing Medicare is an important part of Labor’s governing mission,” Chris Bowen said on Sunday.

“Delighted to have been appointed shadow minister for health and looking forward to building on Labor’s tremendous record in health.”

Mr Bowen will be facing off in the House of Representatives against the experienced Health Minister Greg Hunt, who has spent long enough in the portfolio to provide a challenge to the Labor spokesman as he gets his head around the detail of the portfolio.

Of course, one of the interesting dynamics that after being forced into considering new taxes to pay for health and education policies, Mr Bowen is now in charge of one of the biggest drains on the federal budget. You might call it gamekeeper turned poacher.

No change in the foreign affairs portfolio for the two women who will face off in the Senate. But sometimes hanging on to the portfolio you have is a victory.

In the case of Penny Wong, there was speculation that Richard Marles, who can choose his own portfolio as deputy leader, was eyeing the plum role. Senator Wong clearly dispensed with this idea rather swiftly and will continue in the role she has held since 2016.

Senator Payne is newish to the job after Julie Bishop’s exit from the front bench following last year’s leadership change. She assumed the role after a stint as Defence Minister from 2015 to 2018.

Attorney-General Christian Porter has a lot on his plate with Industrial Relations now joining his existing portfolios. The ambitious Tony Burke’s decision to grab responsibility for industrial relations will see him work closely with unions, which could also help him build support for future advancement within the ALP.

More importantly, he will be tasked with deciding whether Labor adopts a less pro-union approach than it had at the last election. No surprises for guessing what Mr Porter’s job is: Playing attack dog on Labor and the unions.

Mr Porter is book smart, but could come undone when it comes to connecting with those on low incomes and penalty rates.

The question of where to put the former Labor leader loomed large in Mr Albanese’s deliberations on his first front bench. There is a Shakespearean element in returning Bill Shorten to disability services, the portfolio where Kevin Rudd tried to bury him when he first entered Parliament in 2007.

At the time, there was speculation that he regarded the outer ministry role as disappointing before becoming passionate about the job and helping to create the National Disability Insurance Scheme.

On the fun quotient, one friend of Mr Shorten’s noted that he will be “shadowing the most clueless flog in the government”, which could prove its own reward. His name is Stuart Robert, one of Scott Morrison’s best mates and the newly minted minister for government services and the NDIS. Mr Robert returns to cabinet despite hitting the headlines for running up a $38,000 internet bill he blamed on “connectivity issues”.

In 2016, he was forced to resign from the ministry after an internal investigation revealed he had shares in a trust linked to the mining company of a Liberal donor.

No change in the education portfolio. In theory, the impressive Tanya Plibersek should be able to skewer the less-experienced Education Minister Dan Tehan before breakfast. And yet the question has to be asked: Just how effective really was Labor in selling a record spend on public schools if they just lost the election?

Ms Plibersek is razor sharp and some might argue unnecessarily unkind at times in Parliament about Mr Tehan’s less-confident delivery.

No change again here with Labor’s Mark Butler retaining the energy and climate change portfolio. He’s already experiencing some friendly fire with suggestions from Tony Burke about how Labor should proceed on climate change polices.

Energy Minister Angus Taylor was something of a mystery man during the election as the so-called Watergate scandal broke, a saga involving his historical involvement with a company that went on to sell water licences to the government for $80 million. Mr Taylor maintains he had no involvement with the company at the time of the sale and neither he or any family members received any benefit from it whatsoever.

Expect Labor to pursue the water licence issue – although it has to be said that there’s no smoking gun that has yet emerged linking Mr Taylor to the sale. Mr Taylor will no doubt keep the pressure on Labor over climate change policy costings.

Labor’s new finance spokeswoman, Katy Gallagher, is a former ACT chief minister who was ejected from Parliament during the citizenship fiasco.

Her appointment ensures that a woman is again part of Labor’s economic team, but her failure to sort out her citizenship could give the government some fun to play with.

After first refusing to answer questions about whether she had Ecuadorian citizenship by descent through her mother, she eventually referred herself to the High Court months later.

It turned out the UK Home Office did not register her renunciation until August, more than a month after the election so she was ineligible to sit in Parliament.

The Terminator is a nickname sometimes bestowed on the Belgian-born Finance Minister, a homage to his Arnold Schwarzenegger accent.

His other less well-known claims to fame include dancing with German performer Nena during a rendition of the pop song 99 Luftballoons and accusing Bill Shorten of “wibble wobbles” on budget repair.

“The problem that the Labor Party has today is that Bill Shorten is an economic girly man,” he once said.

It’s a safe bet that he will not be using that line on Senator Gallagher.

Head to head: How Liberal and Labor ministers match up