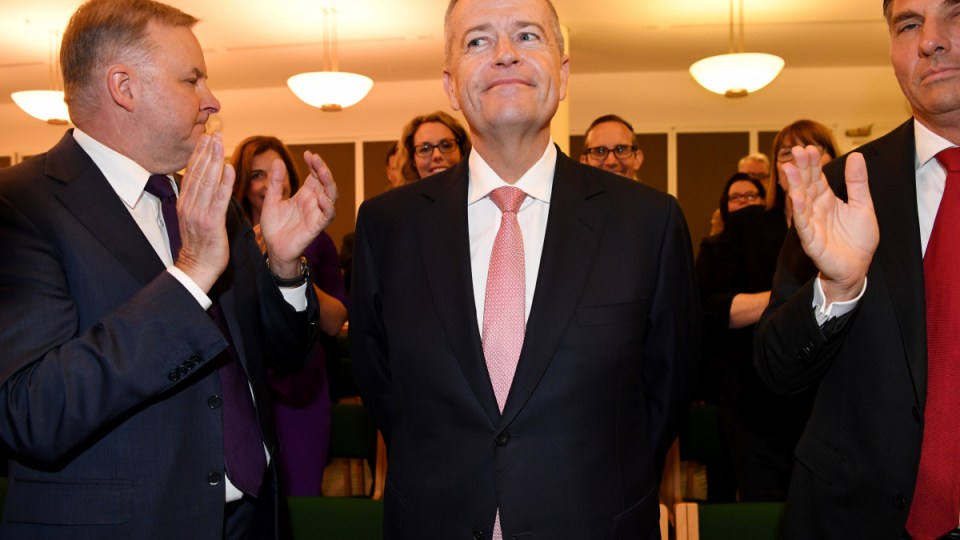 Bill Shorten has broken his silence about Labor’s election loss, blaming “corporate leviathans”  and “powerful vested interests” for the shock result on May 18.

The former Labor leader joined colleagues at the party’s first caucus meeting in Canberra on Thursday, where he formally handed the party leadership to Anthony Albanese.

“We were up against corporate leviathans, spending hundreds of millions of dollars telling lies, spreading fear. Powerful vested interests campaigned against us through sections of the media itself, and they got what they wanted,” he said.

“I understand that neither of these challenges disappeared on election night. They’re still out there for us to face.”

Mr Shorten, who is understood to be keen to remain on the opposition frontbench, and take the disabilities portfolio, said he was ready to help Mr Albanese unite the party following its defeat.

Few have played a bigger or longer role in uniting our party than Don Farrell. Few have made as many repeated personal sacrifices. Few have taken such risks to support young women into parliament. But what would I know, clearly twitter knows better

Labor’s caucus meeting came just hours after South Australian Don Farrell agreed to stand aside as the party’s deputy Senate leader, paving the way for Kristina Keneally to take over.

His decision will mean Labor has two men and two women in leadership roles heading into the 46th parliament in July.

“Don Farrell is well-liked by his colleagues. He is respected by me and by all of our team. That respect goes up even more today,” Opposition Leader Anthony Albanese said in Canberra on Thursday.

“I thank Don Farrell for putting aside his own personal interests for the interests of our great party, as he has always done.

“He will remain a valued member of my shadow cabinet and he will have a senior role.”

Mr Albanese formally took over as leader at Thursday’s meeting.

“I accept my share, as a senior shadow minister in the show, for the fact we weren’t successful [at the federal election],” he said in his first speech to the caucus as Opposition Leader.

“I say that I respect the office of prime minister. That doesn’t mean you [Scott Morrison] will get an easy time, because you won’t. My job and our job in this room so to hold you to account.”

Mr Albanese will allocate portfolios to the shadow ministry, with names and roles expected to be announced at the weekend. The shadow cabinet and outer ministry will be selected along factional lines, with 16 members coming from the Right and 14 from the Left.

Queensland MP Jim Chalmers, who had considered a tilt at the leadership, is tipped to move from finance to the treasury portfolio.

He wouldn’t discuss publicly what portfolios he has talked about with Mr Albanese but said he was keen to play a prominent role.

“I think it’s important that Queensland has a prominent say in the alternative government,” he said.

Mr Albanese on Wednesday won the first test of his authority when shadow minister Ed Husic stepped aside to give former NSW premier, Senator Keneally, the chance to sit on the opposition frontbench.

The leader had insisted Senator Keneally become a shadow ministry member, against the will of some of her NSW Right faction colleagues, who wanted Mr Husic to stay on.

Mr Husic said while he had loved being a shadow minister he would not run again so the party could ensure “someone of Kristina’s enormous talents” was able to make a frontline contribution.

Factionally unaligned Canberra-based MP Andrew Leigh, who was previously shadow assistant treasurer, will be a victim of the faction system and won’t be returned to the frontbench.

The new shadow ministry will meet for the first time in Brisbane on Tuesday. That choice of venue reflects the newfound importance of Queensland, the state where Labor lost vital support during the election campaign.