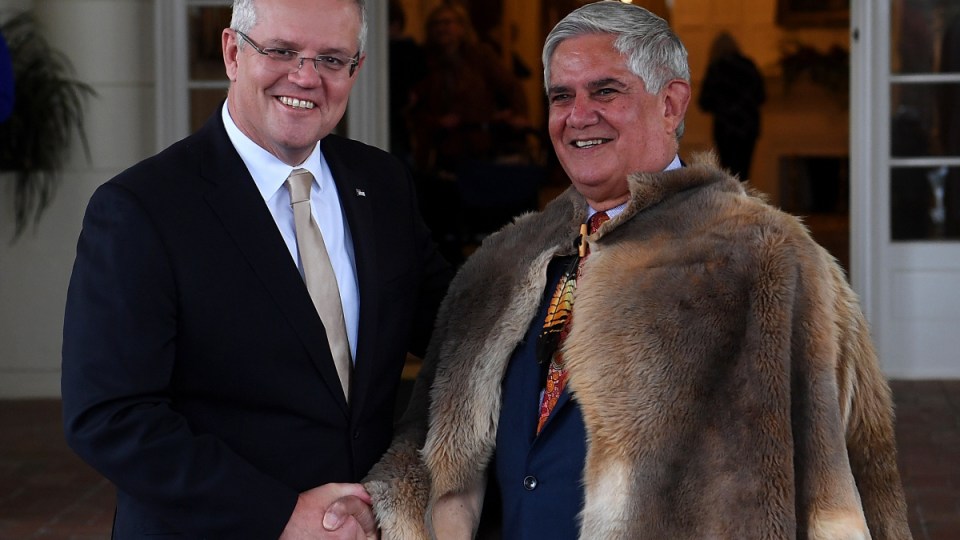 Ken Wyatt, member for the West Australian seat of Hasluck, received a standing ovation as he was sworn in on Wednesday while proudly wearing a traditional kangaroo skin cloak.

The cloak, called a “booka”, was given to him by the Noongar people of south-west WA.

“Can I ask all those, other than His Excellency, of course, to stand to welcome the first Indigenous member of cabinet … the Honourable Ken Wyatt AM, MP, as Minister for Indigenous Australians,” Prime Minister Scott Morrison said.

But it was not the first time that Mr Wyatt, a Noongar man and son of a member of the Stolen Generations, has made history.

The portfolio of Indigenous affairs has previously been held by the likes of Northern Territory Senator Nigel Scullion and former prime minister Tony Abbott.

Mr Morrison and Deputy Prime Minister Michael McCormack were the first to be sworn in at the ceremony, which was held at Governor-General Sir Peter Cosgrove’s official Canberra residence.

The Prime Minister was jubilant when he gathered his new team for a photograph on the front steps of Government House afterwards, saying: “How good, how good.”

The cabinet includes a record number of seven women as ministers.

All of the frontbenchers received an Australian flag stickpin, which Mr Morrison has made a feature of his daily dress-code since taking up the Liberal leadership in August last year.

In the first post-election meeting with Coalition MPs on Tuesday, Mr Morrison insisted his “hungry, committed and united” team would focus on the aspirations of ordinary Australians during their third term in power.

“We must burn for the Australian people every single day that we have this privilege of serving them, in this party room and as a government,” Mr Morrison said.

And he told his backbench colleagues he and his office would be accessible to them and he expected the same from his ministers.

The 46th parliament is expected to sit for the first time in the first week of July.