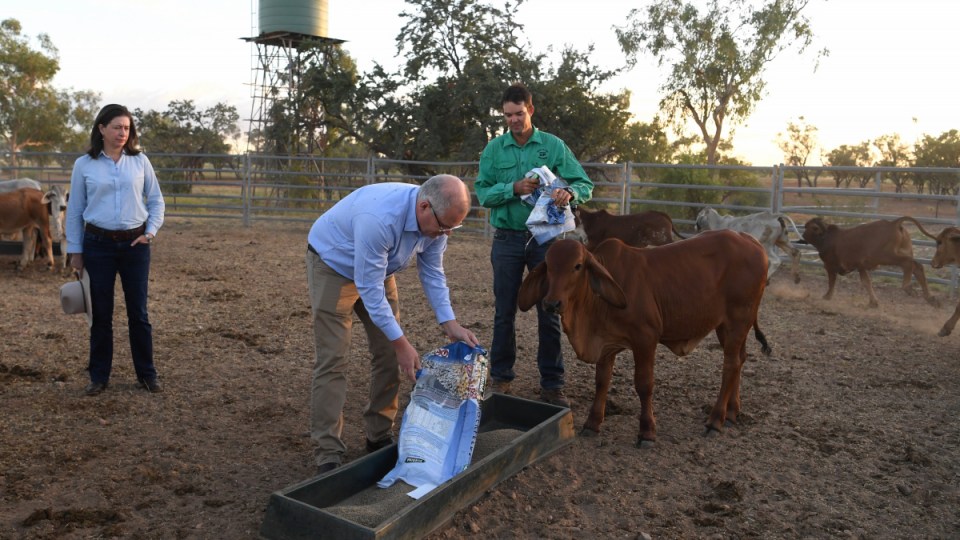 Mr Morrison first visited the Gipsy Plains stud near Cloncurry in February after floods wiped out 2500 of the Curley family's cattle. Photo: AAP

Scott Morrison has made an emotional return to an outback Queensland cattle farm still reeling from devastating floods.

In his first trip since being returned as prime minister, Mr Morrison choked back tears while visiting Jacqueline and Robert Curley at their Cloncurry stud in the state’s north-west.

“This is emotional coming back,” he told the couple over breakfast on Friday morning.

“It’s quite overwhelming, to come back and just see the spirit, that’s what I love.

“The spirit and the life here, and how, despite everything that happened, the fact that we’re all working together to rebuild.”

Mr Morrison first visited the north-west Queensland property in the direct aftermath of the February floods, which killed more than 2500 of its cattle.

Another 1500 calves also died from frost or exposure, wiping out one-third of the Gipsy Plains herd.

The prime minister said the smell of dead cattle stayed with him.

“That’s the thing that just completely overwhelmed me,” he said.

“It’s still there Scott – it’s not as prevalent as it was – but you can pick it up all the way along.”

Mr Morrison and Deputy Prime Minister Michael McCormack walked through the property at first light, before heading into a holding yarn to feed a few dozen calves.

The pair then sat in the lounge room to watch a 10-minute homemade film of the floods.

“They were just dead everywhere,” Mrs Curley said, describing how she used a helicopter to winch surviving cows from the mud.

“We just had to shoot what we couldn’t get out.”

Mrs Curley said it would take more than 10 years to rebuild their stocks.

“We’re trying to replace them and they’re just incredibly expensive,” she said.

“We just don’t have the money to do it, but we’ll get a few here and there.

“ Many of the surviving cows are struggling with trauma, slashing their chances of producing calves. The floods also washed away top soils and stripped nutrients from the grass.

“We could be back in drought by the end of the year,” Mrs Curley said.

The prime minister will later head to the Burke & Wills Campdraft, an annual rodeo attended by hundreds of farmers and primary producers.

Arriving into Cloncurry overnight, Mr Morrison paid tribute to the resilience of Queenslanders recovering from the natural disaster, which is thought to have killed half-a-million head of livestock.

“What I know absolutely is that this part of Australia is going to be vibrant, successful, and prosperous for generations to come,” he told hundreds of Cloncurry locals at the bowling club on Thursday night.

“This has been one of those times when I think Australians have really all pulled together and shown everyone what we can do.”

Among the crowd was Brenda Bulley, a grazier from nearby Julia Creek, who lost more than 60 per cent of her stock in the February floods.

“The impact was devastating – to see the stock that had suffered, the way that they died – the amount of stock that we lost,” Ms Bulley told AAP.

More than $3.3 billion has been paid or committed to help farmers respond and recover.