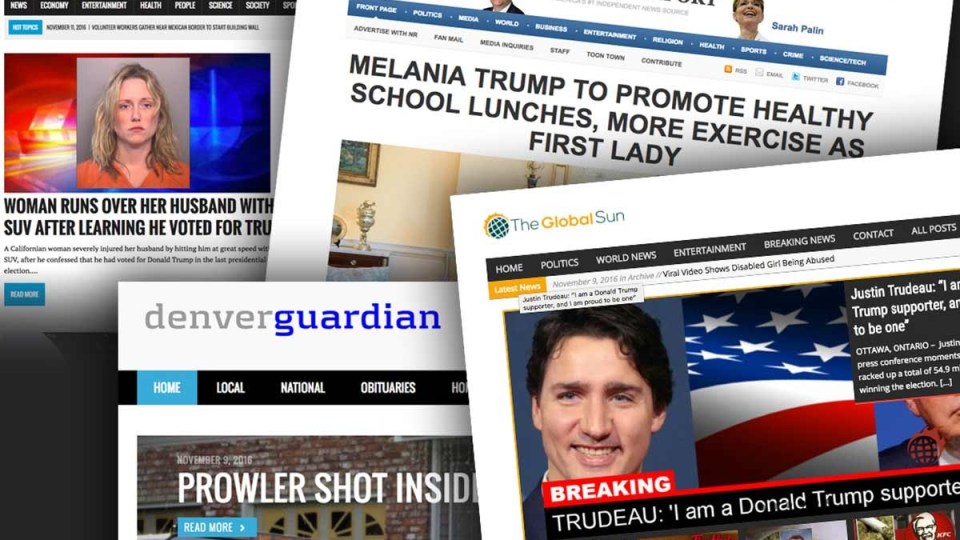 Examples of the fake news stories published during the US election.

Australian teenagers could soon be tested on their ability to identify fake news in a fresh approach to the way schools teach students about the internet.

The Australian charity behind the program, the Alannah & Madeline Foundation, says successful completion would allow students to get their ‘digital licence’.

Once received it would confirm students are equipped to siphon out misleading online information.

It comes amid growing concern that young people are turning almost exclusively to online sources and social media for unchecked facts about world issues.

“We did a lot of research and what became clear was that young people get their news online in a variety of forms – news feeds, memes, you name it,” Alannah & Madeline Foundation chief executive Lesley Podesta said.

Ms Podesta added that “too many young people are digesting this stuff quickly and not digging any deeper”.

The program, which has the financial backing of Google Australia, will involve students aged 12 to 15 being confronted with a series of online scenarios and then being tested about how they would respond.

For example, they may be tasked with examining a website or a social media feed. They would then be asked questions like: Is the information presented balanced or is a bias at play? Is it a reliable news source from a professional journalist?

Ms Podesta said the curriculum was developed in consultation with teachers who voiced concern that curriculums are struggling to keep up with the evolving media landscape.

“Schools still teach from newspapers and that is great, but teenagers are not all going home and reading them. They’re online. So to keep up with reality, teachers said they needed tools to teach online literacy,” Ms Podesta told The New Daily.

According to a study from Western Sydney University and Queensland University of Technology, only one in five Australian school students have received lessons in the past year to help them work out if a news article or website could be trusted.

Professor Peter Fray, from the University of Technology Sydney, said the importance for young people to understand the role of media and its links to democracy could not be underestimated.

“Adolescents must be able to develop independent thought and be able to determine the origin of news and dig out any hidden agendas,” Professor Fray said.

Ms Podesta believes it goes beyond just analysing the bias or misinformation in a news article.

She pointed to easily found and well-designed websites that peddle harmful messages, for example, anti-vaccination and pro-anorexia websites.

“There are thousands of them (websites) and they often have high production values which, in the eyes of many teenagers, make them seem legitimate,” Ms Podesta said.

“If kids accessing them do not have the necessary critical thinking skills, then they can really alter world views and cause major suffering.”

There is another element to the program. It recognises that young people are often not only consumers but also producers of content.

It is hoped that through the program young people will be more conscious of what they are creating online and its impact.

It is expected that all Australian secondary schools will have access to the Alannah and Madeline Foundation‘s eSmart Digital Licence program by early 2020.