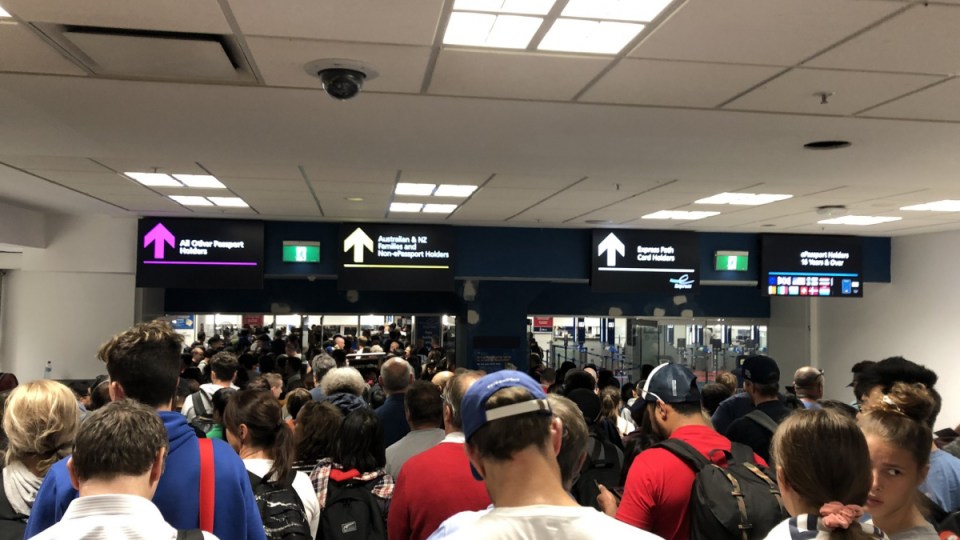 Australian Border Force have been deployed to airports across Australia to help process passengers. Photo: Twitter

Thousands of travellers were left stranded – some for hours – at international airports across Australia on Monday because of a technical glitch that hit electronic passport gates.

The SmartGate outage affected processing of inbound and outbound passengers and lasted for several hours on Monday morning.

The Australian Border Force worked furiously with the Department of Home Affairs to resolve the IT outage as passengers complained of queues hundreds, even thousands, deep.

“Additional ABF staff have been deployed to process passengers and to minimise delays,” an Australian Border Force spokesman said.

Sydney, Melbourne and Brisbane airports were all affected by the failure of the SmartGate passport machines, which happened about 6am. Melbourne Airport tweeted about 11.30am that its gates were working again.

“It seems as if all the e-machines have gone down, so they have to manually process everyone,” she said.

We're working to resolve an IT systems outage impacting inbound and outbound passenger processing at international airports. Additional staff have been deployed to help minimise delays. Passengers are encouraged to arrive early to allow additional time for processing. pic.twitter.com/qSn4ThVN7m

Other affected passengers used social media to express their frustration at the failure of the SmartGate system.

“Sydney airport you should be ashamed. 7am, all the international flights are landing, the epassport gates aren’t working and 2000 people are jammed into your poxy arrivals hall,” one user said.

“The SmartGate system is down at Sydney Airport and there are THOUSANDS of passengers waiting in line to be processed manually. This is going to take HOURS.” another said.

Chaos at Melbourne airport! Hundreds trying to get through immigration machines down !! pic.twitter.com/lvdnbLKuQv

During the outage, Border Force staff handed out bottled water to some of the passengers.

Elsewhere, passengers were encouraged to arrive at airports early to allow additional time for processing.

A Melbourne Airport spokeswoman encouraged travellers to head to the airport as per their original plans.

“Within the terminal, we’ll be continuing to make public address announcements every few minutes, so please pay attention to these announcements for the latest updates,” she said.

“We’re extremely appreciative of the patience and good grace shown by passengers this morning and we would like to thank everyone for sticking with us during this period.”

Emergency supplies are coming out at Sydney Airport. Feel like we’re going to be here a while. pic.twitter.com/hLCI6W4JML

A Brisbane Airport Corporation spokeswoman said the airport was first notified about the passport machine issue just after 6am.

“The ABF smart gates were in and out and they were doing manual processing at the international terminal,” she said.

“We got staff in pretty quickly to manually process people.”

I've just spoken to Leonie Vanderven from @BrisbaneAirport for the latest details: pic.twitter.com/atlgt5tg7M

IT outage causes chaos at airports across Australia