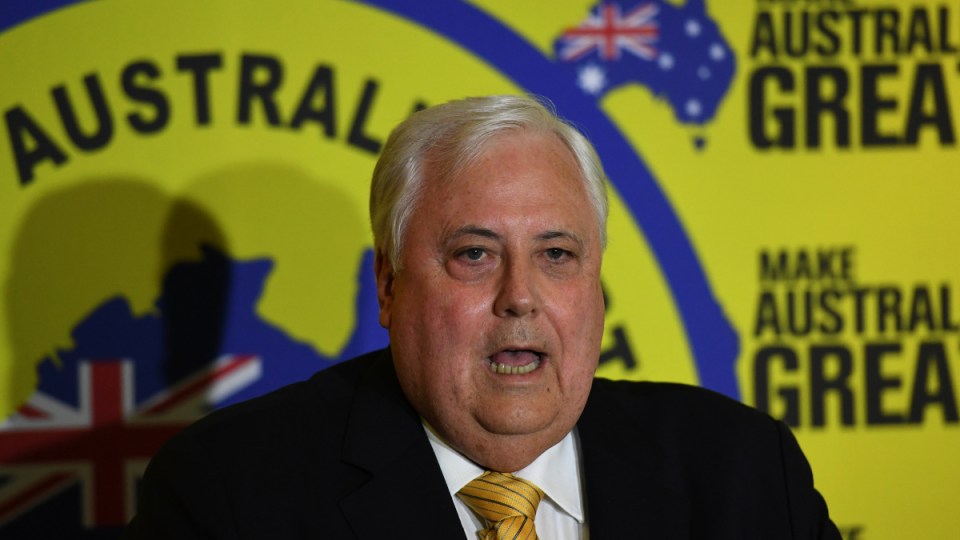 The Australian Labor Party has denied offering Clive Palmer a preference deal, despite his claims they have courted him since 2013.

Mr Palmer lashed out at federal Labor leader Bill Shorten on Monday, calling him a “two-faced liar” for saying the ALP would never do a preference deal with his United Australia Party.

Mr Palmer was giving a statement in Brisbane about the UAP’s stance on preferences after it was revealed last week he had done a deal with the Liberal/Nationals coalition.

The controversial mining businessman, who pegs his wealth at “4000 million” dollars, said he had met then-state secretary of the Queensland Labor branch Anthony Chisholm as far back as 2013.

“Anthony Chisholm met with me in our party offices in Brisbane in 2013 and had further negotiations and discussions that year on the question of preferences,” Mr Palmer said.

He said the party continued to make direct overtures before this year’s federal poll.

Mr Chisholm has admitted speaking with Mr Palmer but firmly denied that any negotiations over preferences took place.

“I was not authorised to offer anything and I didn’t,” Mr Chisholm said.

“Bill Shorten has made it clear that no arrangements with Mr Palmer could be entertained while Queensland Nickel workers remained out of pocket, and I agree with Mr Shorten’s principled position.

“There is only one party that has a deal in place with Mr Palmer and it is the Liberal National Party.”

Mr Palmer said Mr Shorten’s criticism of the UAP preference deal with the Coalition was hypocritical.

“Shorten’s attack against the Liberal Party highlights the double standards and a fatal flaw in his character,” he said.

“The Labor Party and Shorten were happy to deal on preferences with the United Australia Party and they wanted them but they were bad losers.

“It was only after they realised they had missed out that they attacked the Liberal Party for doing the same thing as they were trying to do.”

Mr Palmer’s party is urging UAP voters to preference the Liberals or Nationals second on their ballot papers for the May 18 election.

“We could not preference the ALP because we realised if we were to do so and they won, their policies would destroy Australia,” he said.

Earlier, in an extraordinary TV interview, Mr Palmer lashed out at those who have criticised him while insisting he doesn’t care what anyone else thinks because he has $4 billion in the bank.

He also urged Australians not to listen to public opinion polls and argued his United Australia Party could be running the country after the federal election.

“We know what the real figures are and we will be there on the 18th of May and there will be a new government in Australia,” he told Nine’s Today show.

“My wealth is four thousand million dollars, do you think I give a stuff about what you personally think?” @CliveFPalmer to @Deborah_Knight. #9Today pic.twitter.com/JsAvt1eRLU

He also denied he was in financial strife and, when asked what he was worth, cited “recent polls” in The Australian putting his fortune “at about 4000 million” dollars.

“I’m in terrible strife. It is really difficult,” he quipped.

He said the $7 million owed to refinery workers would be available from Tuesday, through a trust managed by a solicitor. Previously he had said it would be paid after the election.

When asked why he’d dragged his heels on workers’ entitlements when he had so much money, Mr Palmer said he wasn’t personally liable for every debt his business incurred.

“As you know, I was a shareholder of a company for a start. That doesn’t make you personally liable for every debt,” he told Nine.

Mr Palmer was less generous when asked if he’d pay back almost $70 million in entitlements covered by Australian taxpayers when the nickel business folded.

The federal government stepped in to meet those debts and then appointed liquidators to pursue Mr Palmer for the money.

But Mr Palmer said that debt was not his to bear and that QN’s administrators were responsible because they refused his offer to keep the Townsville nickel plant open.

‘Two-faced liar’: Palmer fires up at Labor in preferences spat