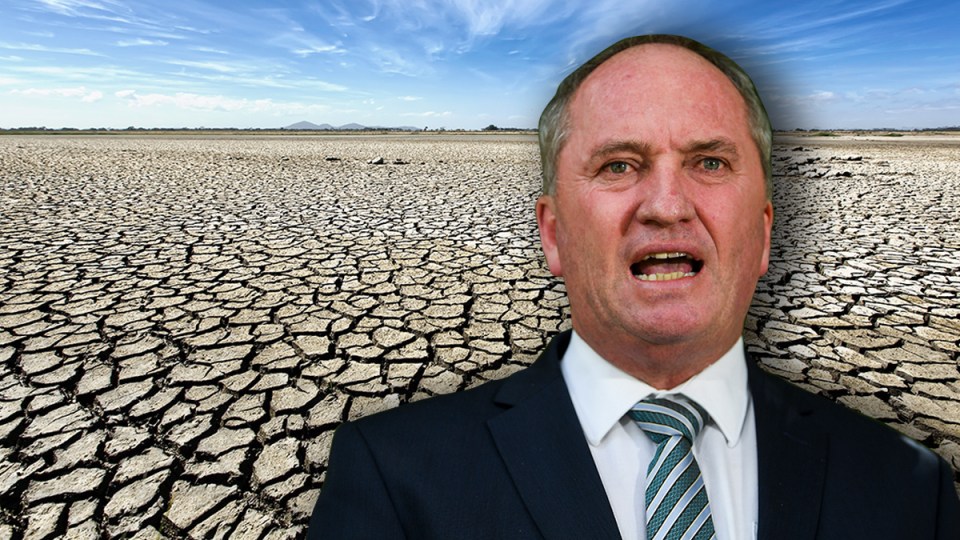 Water Minister David Littleproud has written to the Auditor-General to ask him to examine all water purchases in the Murray-Darling basin in the past decade.

The decision is designed to repel calls for a royal commission into the $80 million sale of water licences during former deputy PM and Nationals leader Barnaby Joyce’s tenure.

It is also designed to draw Labor into the controversy, because it will capture the period when Labor was also involved with water buybacks during the Rudd-Gillard government.

“Where we need to get a review by institutions like the Auditor-General, then we will,” Mr Littleproud said on Tuesday.

“To pre-empt the Auditor-General’s review would be nothing more than a political stunt.”

Speaking in Tamworth on Tuesday, Mr Joyce appeared for the first time since a testy interview on the ABC’s Radio National on Monday, where he described critics of the $80 million deal as peddling “absolute horse poo.”

“I had confidence that what they had done had been a diligent and forensic process and, on their advice, we went forward,” Mr Joyce said.

"The Auditor-General will look over these things," he said.#AustraliaVotes pic.twitter.com/adRy0CdQ79

It also emerged on Monday that the company at the centre of the deal, Eastern Australian Agriculture, donated $55,000 to the Liberal Party before the 2013 election.

At the time of the subsequent sale in 2017, Mr Joyce was the agriculture minister.

On Monday night, he defended the sale on the grounds that the Queensland Labor government pushed for it, asking on the ABC “Are they morons?”.

Accusing his critics of smearing the Morrison government by suggesting a “nefarious imbroglio”, the former deputy PM said he did not fear a royal commission.

“Do you believe Mrs Smith should vacuum her living room?” Mr Joyce asked.

“So I repeat: I don’t care. I have absolutely nothing to hide. I know this is an absolute load of horse poo.”

Sorry @D_LittleproudMP but a similar request was made to the Auditor General last year. Don’t try to flick this off into the future. Release the full unredacted documentation today – as I asked you to last year #watergate #Auspol #AUSVote2019 https://t.co/JZrgYAeqxv https://t.co/hK4TjwzJye

Mr Joyce said the true owners or beneficiaries of the company that sold the water and secured $80 million were “irrelevant”.

“You’re asking if they have water to sell. You are not asking them what clothes they wear or who they are married to,” he said.

“I’ve heard it’s a trust fund in the Cayman Islands. There you go. That’s what the Queensland government should have told me.”

The complete list of owners or beneficiaries of the $80 million deal are unknown.

But in a plot twist, senior government sources told The New Daily that one investment fund involved, the Hong Kong-based Pacific Alliance, is also involved in the Future Fund, which means an “indirect benefit” has flown back to taxpayers.

The Future Fund was established by former treasurer Peter Costello to fund public servants’ superannuation and is independent of the government. It has subsequently been expanded to help fund medical research and is valued at $146 billion.

Under the Murray-Darling Basin protection plan, the federal government is attempting to buy back surplus irrigation water licensed to farmers from state governments.

If a farm doesn’t need all the water it has been allocated under its state licence, it can sell the excess back to the government. It is then returned to the river system.

Mr Joyce said he was happy to front a royal commission to answer questions but did not believe it was necessary.

“Course I am, wouldn’t give a toss. Whatever boat I am in, is the boat [Labor’s] Penny Wong is in,” he said.

Labor is leaving the door open to backing the royal commission, amid claims that the $80 million was sent offshore to a Cayman Islands tax haven.

During the interview, Mr Joyce repeatedly interrupted and spoke over the interviewer, the ABC’s Patricia Karvelas, accusing her of implying some sort of dodgy dealing.

“Don’t duck and weave. Come on, spit it out,” Mr Joyce said.

Mr Joyce said he had no idea that the company involved in the purchase, Eastern Australian Agriculture, had previous links to Liberal frontbencher Angus Taylor.

Mr Taylor has confirmed he exited the company before entering Parliament and had no involvement in the sale.

He was not involved in the company when it donated to the Liberal Party.

Mr Taylor, who helped set up the structure, has confirmed he received no financial benefit beyond consultancy fees some years before the $80 million sale.

“I am going to help you out. I never knew Angus Taylor. I wouldn’t know him if he stood up in my corn flakes before he came into Parliament, right?,” Mr Joyce said.

Asked if he had ever discussed the transaction with Mr Taylor at the time he said: “Zero, zero”.

“This is such a load of horse crap. Honest to God,” he said.

During the testy 30-minute interview, Mr Joyce also repeatedly blamed the Queensland Labor government for encouraging him to buy the water.

“Why did the Queensland government recommend it to us? Are they morons? Were they asleep?” Mr Joyce said.

“The Commonwealth wants water. I know now, but not at the time. Are you taking a confessional or do you want the water?” he said.

“I was following a Labor Party-Green edict. This is what they wanted.”

At one point, asked if he regretted making the deal, he replied: “Oh, I’ve got no idea. If there was cheaper water out there we would have bought it”.

“I didn’t want to buy it. It was recommended to me by the Queensland Labor government,” he said.

“The Greens and all the other people wanted more water back in the river. That was the decision of the Labor Party. We bought the water.

“If you want to start looking at this, let’s look at Penny Wong, who bought $303 million in water.”

Earlier, Prime Minister Scott Morrison faced calls for a royal commission into the saga from the Greens and Centre Alliance.

Labor has set a deadline for the Morrison government to release more documents.

“The department has appeared before the Senate inquiry and has gone through the details of the process that led them to that price and how it was transacted. In addition, there is the auditor-general who undertakes the regular analysis and review of the arrangements,” Mr Morrison said.

Littleproud seeks review of a decade of water buybacks