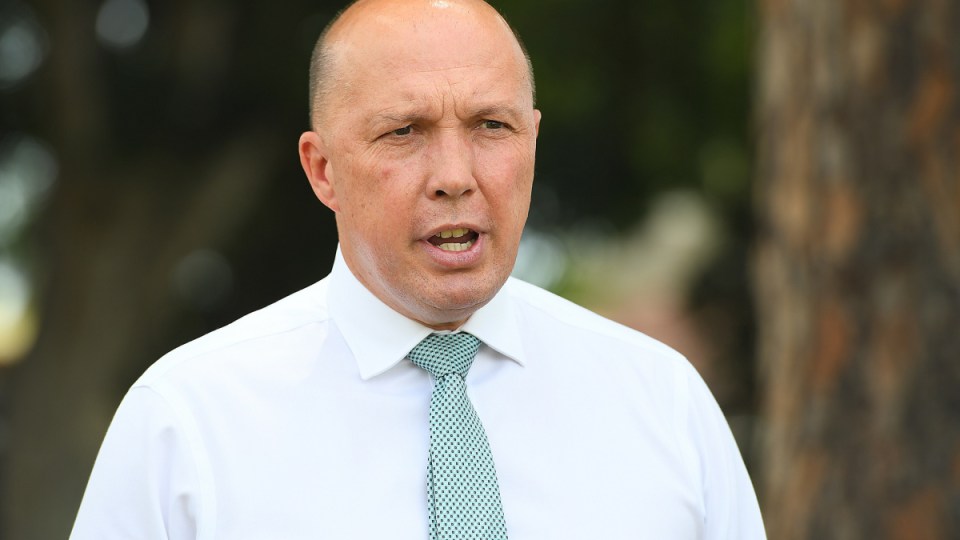 Home Affairs Minister Peter Dutton has apologised to his Labor challenger Ali France for accusing her of “using her disability as an excuse” for not moving into the Dickson electorate ahead of the federal election.

“I apologise to Ms France for my comments yesterday [Friday],” Mr Dutton tweeted on Saturday afternoon.

“My argument with the Labor candidate is about how our respective policies would affect the people of Dickson.”

Ms France, a mother-of-two and former journalist, had her leg amputated after being hit by a car in 2011.

She says she has so far been unable to find a wheelchair-accessible house in the electorate, but has promised to move and modify a home if she won the marginal Brisbane seat at the May 18 election.

Prior to the apology Bill Shorten told reporters on the NSW Central Coast he was “shocked” that Scott Morrison hadn’t asked Mr Dutton to say sorry.

He accused the prime minister of being a “hostage of Peter Dutton” for not requesting an apology.

At the same press conference Labor senator Kristina Keneally called Mr Dutton “a thug” and “the most toxic man in the Liberal party”.

She lives just outside the electoral boundary and works in Dickson.

Mr Dutton, however, told The Australian he was just voicing the concerns of his constituents.

“A lot of people have raised this with me,” Mr Dutton said.

“I think they are quite angry that Ms France is using her disability as an excuse for not moving into our electorate.

“If you are serious about representing an area, you live in that area, and using her disability as an excuse for not living in our area is really making residents angry.”

The seat of Dickson is held by the Liberal Party by just 2 per cent.

His comments have sparked a barrage of criticism from disability advocates, including Greens Senator Jordan Steele-John.

“Ableism is not going to save you in Dickson,” Senator Steele-John tweeted.

Others expressed empathy for Ms France, noting the difficulty of finding appropriate accommodation for people with a disability.

Dutton's attack on opponent Ali France for not moving to the electorate is both ugly + wreaks of desperation. France uses a wheelchair/prosthetic + so finding the right home is kinda complex. She's promised to move if she wins. Gawd, this election is going to be gross… #auspol

Wow @PeterDutton_MP ! Accusing Ali France of using her artificial leg for political traction? That's gotta be a new low for you. Most of us didn't even know Ms France was an amputee. You really are a piece of work. 😡 #auspol #ausvotes2019 #Disability

Despite the backlash, Prime Minister Scott Morrison and Senator Mathias Cormann have thrown their support behind Mr Dutton.

“As Peter Dutton pointed out, clearly, there are people with a disability that live across Dickson and what people in his electorate have put to him is that they don’t accept the explanation that was offered as a reason for his opponent not moving into the seat of Dickson,” Senator Cormann told Sky News.

“I think those comments have been taken out of context,” Mr Morrison said.

Meanwhile, on day two of the campaign trail, Mr Shorten conceded for the first time that the dole has to rise to help people cope with increased cost of living.

Asked if Labor’s review would inevitably lead to an increase, he said: “I think there has to be”.

Former prime minister Malcolm Turnbull recently told The Age he plans to spend most of the election campaign overseas in an effort to draw attention away from the Coalition’s troubled history of infighting.

It is not the first time Mr Turnbull has hopped on a plane during a tense time for the Coalition – he kept away from the drama of the Wentworth by-election by laying low at his apartment in New York.

The Age understands Mr Turnbull will not return to Australia before polling day on May 18.