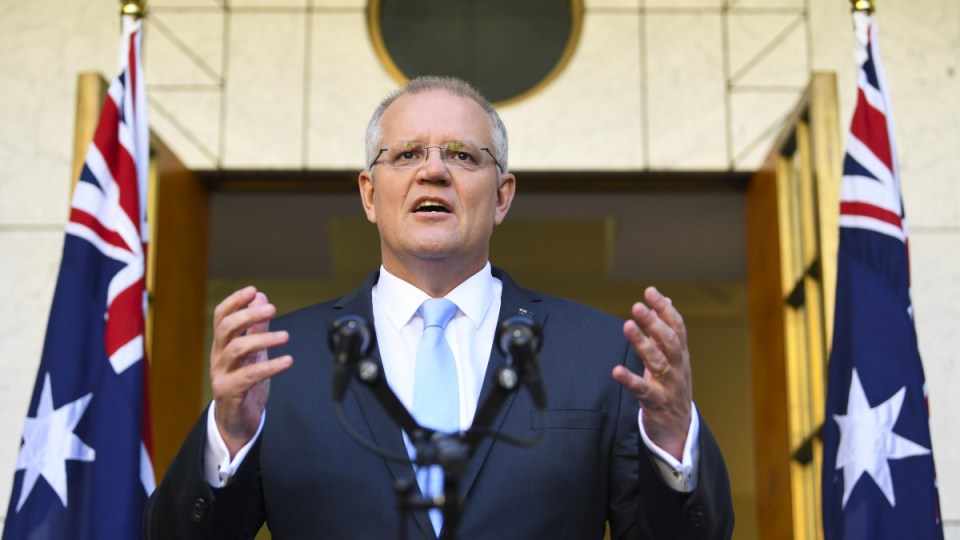 The announcement came after an early morning meeting with the Governor-General. Photo: AAP

Australia will head to the polls on May 18 after the Prime Minister called the federal election on Thursday morning with a warning that voters must decide “who do you trust” to manage the economy.

Opposition Leader Bill Shorten, who starts the campaign ahead in the polls, declared that Labor was united, future-focused and ready to govern.

“We are hungry to do the best we can for the country.

“My feet are firmly planted in the backyard of a Mitcham house (in suburban Melbourne) because I understand that politics should be about the people: It’s about cost of living, education, health, good jobs, renewable energy.”

“He accepted my advice for an election to be held on the 18th of May,” Mr Morrison said from the steps of Parliament House.

“We live in the best country in the world. But to secure your future, the road ahead depends on a strong economy. And that’s why there is so much at stake at this election.”

The timetable for the 2019 federal election #auspol #AusVotes19 pic.twitter.com/kBAroISBR1

But Mr Shorten said it was time to end the chaos of the Abbott-Turnbull-Morrison government.

“My team is united. Do you want Labor’s energy, versus the government’s tiredness? Labor’s focus on the future, versus being stuck in the past?”

“That’s what Australians want – one prime minister for three years, not a revolving door. This election is very straightforward.”

Mr Morrison pledged to serve a full term if elected – and an end to the leadership revolving door of the Coalition in recent years.

“That’s why, after I became Prime Minister, we changed the rules in the Liberal Party. It was the biggest change to the Liberal Party’s rules since Sir Robert Menzies founded our parliamentary party here,” he said.

“At the next election on May 18, if the Liberal-National government is returned … then I will serve as prime minister, because the rules have been changed to prevent the things that have happened in the past.”

Good morning from Moonee Ponds! I'm ready to deliver a fair go for Australia. Who's with me? pic.twitter.com/e55nEEkNgS

Labor strategists warn the election will be close and not the landslide some have predicted. On current polling, Labor should pick up about 10 seats – a handful more than the seven it requires to claim a majority in the House of Representatives.

The Senate is likely to prove more difficult to navigate. That raises questions about whether Mr Shorten can deliver on his ambitious policy of negative gearing reform and tougher climate change targets, even if he wins the election.

On Thursday, Mr Shorten highlighted Labor’s commitment to Medicare and his $2 billion plan to reduce out-of-pocket costs for cancer treatment.

“When [patients] walk in the most terrifying path of their lives, they shouldn’t be drowning in thousands of dollars because the government doesn’t properly fund cancer care. When you look at Labor’s vision for Australia, it is inclusive,” he said.

“We can overcomplicate politics sometimes. Politics is about family and health. What Labor wants to do; we understand Australians want to hand on a better deal to the generations that come after them.”

Time to deliver a fair go for Australia. pic.twitter.com/5zVNFEJHko

“You will have a choice between a government that is lowering taxes, for all Australians, or Bill Shorten’s Labor Party that will impose higher taxes that will weigh down our economy,” he said.

“This election is about the future. But it is a decision people can make about the future because of the record of economic management that our government has delivered.”

Mr Morrison said when the previous Labor government was elected in 2007, it inherited a strong economy and budget surpluses.

“In the space of one year they turned a $20-billion surplus into a $27-billion deficit. They turned strong borders into weak borders. And we have spent the last more than 10 years getting back to where we were,” he said.

Despite being behind in the polls, the Liberal Party believes it can chart a course to re-election by stemming heavy losses in Victoria, and with an attack strategy in NSW and Tasmania.

By calling the election on a Thursday, which is unusual, the government avoided a close of nominations clash with the Anzac Day public holiday, an issue the Australian Electoral Commission had flagged in Senate estimates.

I’m proud of how far our country has come over the past few years. And I know there is still more work for us to do to make life better for all Australians. My vision for Australia is about everyone having the chance to realise their full potential. pic.twitter.com/KJyRSj6zPz

Mr Morrison had been tipped to call the election last Sunday. Delaying it five days allowed the Coalition to finalise a rush of more taxpayer-funded government appointments.

Shadow Treasurer Chris Bowen warned on Wednesday that Labor reserved the right, if it wins the election, to review these and other appointments made in the final days of the 45th Parliament.