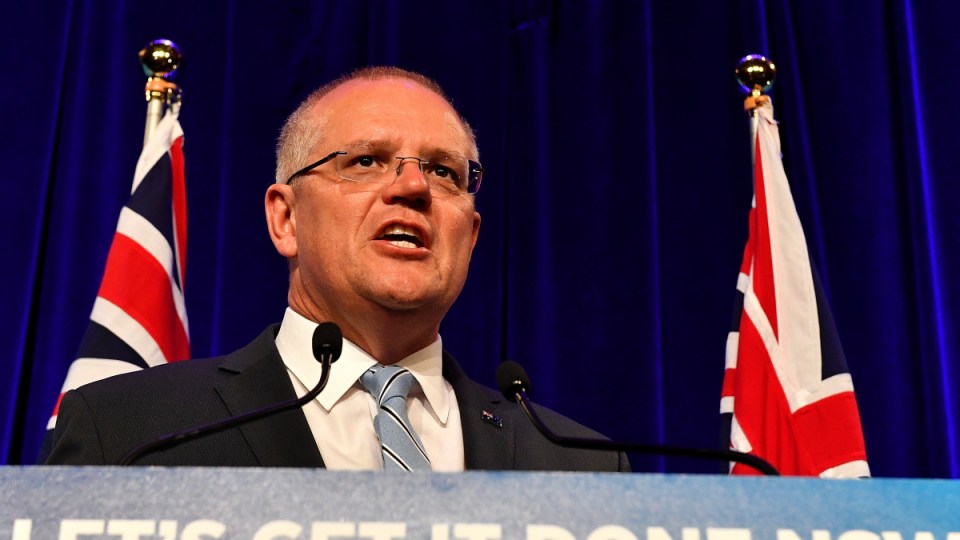 Scott Morrison is preparing to call the election. Photo: AAP

Scott Morrison is preparing to call a May 18 election as early as Thursday morning, hours after his ministers launched a blistering attack on Bill Shorten as ‘two-faced’ on the question of his relationship with a banned Chinese donor Huang Xiangmo.

The Prime Minister flew out of Melbourne after 9pm on Wednesday en route to Canberra, with the expectation he will dissolve the 45th Parliament on Thursday, before calling an election.

Late on Wednesday night, the Prime Minister’s office denied reports he planned a surprise visit to the Governor-General Sir Peter Cosgrove in Canberra to call the election amid speculation he wanted to avoid the “media circus” of helicopters tracking his journey to Yarralumla.

As Labor urged the PM to “bring on” a debate about the opposition’s tax policy, the Prime Minister spent Wednesday touring marginal seats in Tasmania including announcing jail terms for vegan activists who endanger farmers in their family home.

The Opposition leader said “enough was enough” and “time was up” for the PM to call an election.

The Prime Minister had been tipped to call the election last Sunday, but the delay allowed the government to finalise a rush of more taxpayer-funded government appointments before the caretaker period comes into force.

Shadow Treasurer Chris Bowen warned on Wednesday night that Labor reserved the right if it wins the election to review these and many other appointments made in the final days of the 46th Parliament.

The government also rushed out a steady string of announcements on Wednesday night, including $10 million to expand Melbourne’s Jewish Holocaust Centre and $9 million to reduce the waiting list for its specialist education for children with autism in Victoria.

Speaking at the National Press Club, Mr Bowen slammed the Morrison government’s claim that Labor will increase taxes by $200 billion.

He argued that regardless of who was elected, tax revenue will raise around 6 trillion dollars over the next decade.

“Are they really saying [tax revenue] will be $6.2 trillion under Labor versus $6 trillion under the Coalition? Is that the basis of their election campaign? Bring it on,” Mr Bowen said.

He also accused the government of using “dodgy accounting tricks” to make the surplus appear larger and using a “surplus methodology” to cook the budget books.

The Labor frontbencher, who backed Kevin Rudd in the challenge against Julia Gillard, also revealed that he personally regretted the years of chaos.

He pledged Labor had learned the lessons and “changed the rules” to ensure the leadership was more stable.

“We are not going to do that again.”

Speaking in Tasmania, the Prime Minister said if re-elected his government will move to jail vegan activists who share the addresses of farmers online.

Mr Morrison said this was an “appalling assault that is taking place on farmers all around this country, incited by the cowardly keyboard warriors at ‘Aussie Farms'”.

“Now the Attorney-General is going to stand up this afternoon and make some further announcements on this … that our government would introduce legislation that would ensure that those who engage in using such information to incite criminal activity – people going and seeking to trespass, or cause these types of injuries to the wellbeing of our farming industry – they will face jail terms of up to 12 months. So we’re not kidding,” he said.

When the Attorney-General Christian Porter emerged in Perth, he also came armed with new photos of a previously reported attendance of Bill Shorten at the wedding of the daughter of the banned Chinese donor Huang Xiangmo.

“Bill Shorten received $55,000 into the ALP and then shortly afterwards had himself lunch with Huang Xiangmo,” Mr Porter said.

“This now is a central issue about Bill Shorten’s credibility.

“The photographs demonstrate quite clearly that Bill Shorten has a depth of relationship with Huang Xiangmo that he has been absolutely silent about whilst he is delivering criticism of a lunch where business is discussed with a prominent figure of the Chinese community.”

On Tuesday, Mr Shorten attacked Home Affairs Minister Peter Dutton for having lunch with the same donor, after it emerged a Liberal lobbyist was paid by the Chinese billionaire to set up the meeting.

Earlier, the Australian Tax Office told Senate estimates that it cannot move to deliver promised tax cuts unless the legislation passes both Houses of Parliament.

ATO second commissioner Andrew Mills confirmed The New Daily‘s report that it will not implement either the Morrison government or Labor’s plan if they win the election until the laws have royal assent.

The fact that the $1080 is an offset designed to be paid as a lump sum complicates matters.

Previously, the ATO has in some instances delivered tax cuts “administratively” in the expectation of bipartisan support.

But the ATO said it could not do so in this instance as it lacked “clarity”.

“There’s no chaos involved in waiting for a law to apply in order to implement something in an assessment,” Mr Mills said.

Bill Shorten warns PM time is up for an election

Opposition Leader Bill Shorten said “enough was enough” and it was time for the Prime Minister to call the election.

It’s on: PM to visit Governor-General for May 18 election