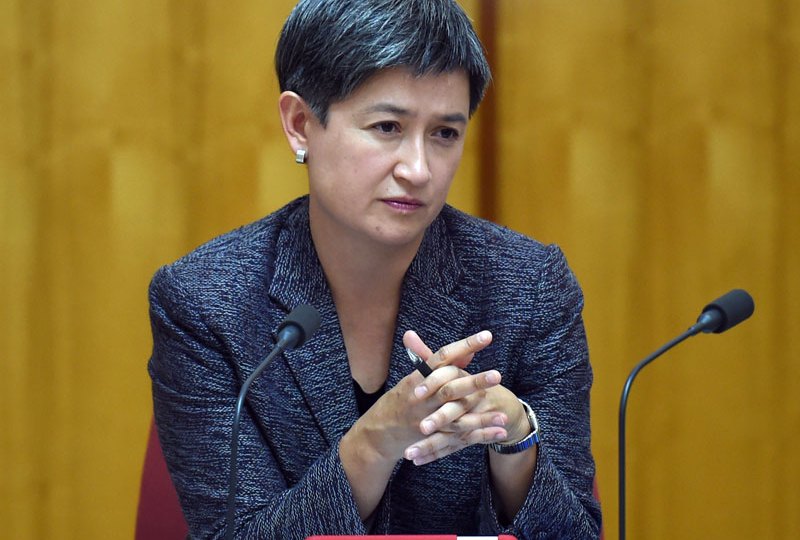 Bill Shorten has demanded the Prime Minister intervene and demonstrate a “zero tolerance” approach to racism after a Liberal MP was caught on tape making jokes about Penny Wong’s name.

The opposition leader seized on the Senate estimates flare up on Tuesday night, releasing a statement to Chinese media demanding that Scott Morrison intervene as the remarks had “racist overtones”.

He then appeared to confuse Mr Huang’s name with Senator Wong. She was not present during the exchange.

“Is it Wong is it? Any relation to Senator Wong?” the senator asked.

Labor senator Louise Pratt interrupted and said his name was not Wong.

Comparing the controversy to the furore over NSW opposition leader Michael Daley complaining that “Asians with PhDs” were stealing Australian jobs, Mr Shorten said the remarks were not acceptable.

“It’s disgraceful that a Liberal Senator would suggest that people of Asian background all have the same name or are all related,” Mr Shorten said.

“Comments like this that have racist undertones must always be called out. There is never an excuse.

“I said that Michael Daley’s comments were unacceptable and did not reflect the Labor Party’s views.”

Mr Shorten also raised an earlier controversy, when another Queenslander Barry O’Sullivan used the term “Chinaman” in the Senate.

“This is the second time Scott Morrison is letting a Liberal politician get away with offensive comments. Barry O’Sullivan still hasn’t apologised for his comments, and Scott Morrison hasn’t made him,” he said.

“I will never accept racism. Scott Morrison needs to show leadership and make Senator Macdonald apologise for this.”

Labor senator Kimberley Kitching told Senator Macdonald in the meeting that his comment was “very inappropriate”.

“Now these names are obviously dissimilar, but if you were attempting to smear Senator Wong, with an association of relations with Mr Huang, then I think you should apologise to Senator Wong,” Senator Kitching said.

Mr Huang had been banned from returning to Australia on national security grounds after ASIO advice.

“People are throwing the name around and it sounded to me as if you were saying Wong, and as a throwaway line.”

He later said: “You are very sensitive about it.”

“If Senator Wong has taken offence, then I apologise to her. But if she does take offence she has a very thin skin.”

“At the end of the day the Liberal Party has got to go to its core values and I think they know what to do,” Mr Yung told The New Daily.

“But where was Bill Shorten during the entire Michael Daley saga? He really only came in to say anything after the election. He’s an opportunist.

“I just don’t think we should have those kind of jokes. I don’t think you should be making jokes about race.”

The flare up coincided with the Labor Party launching its first television ads of the campaign focusing on a “fair go” and Mr Shorten’s plan to tackle out-of-pocket costs for cancer.

Here's a sneak peek of an ad we're launching tonight.

The PM is delaying the election so he can spend taxpayers’ money on advertising.

We need your help to counter this abuse of taxpayer funds. Can you help us keep this ad on the air? Donate at https://t.co/d5Xuk01XWN pic.twitter.com/mSRZzAm0B7