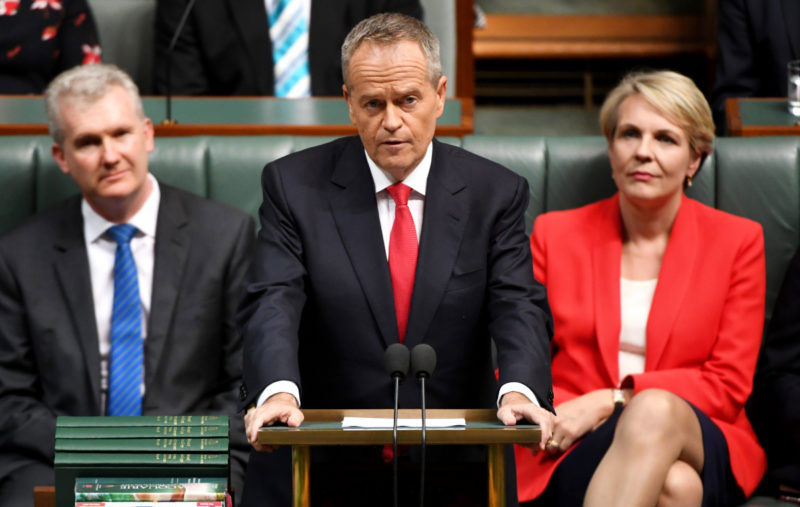 Opposition Leader Bill Shorten has pledged to trump the Liberals on tax cuts for average workers and dramatically slash out-of-pocket costs of up to $10,000 for Australians diagnosed with cancer.

Promising to deliver the biggest overhaul of Medicare since Bob Hawke was prime minister, Mr Shorten on Thursday night pledged to slash the cost of MRIs and scans for Australians fighting cancer in his budget reply speech

If elected, Labor will also match new tax cuts of up to $1080 for singles for workers earning under $130,000 but deliver a more generous tax-free threshold to ensure that these workers secure bigger tax cuts under a Shorten government.

The $2.3 billion investment to dramatically slash out-of-pocket costs for cancer patients was billed by the ALP as the biggest overhaul of Medicare since Mr Hawke was Prime Minister from 1983 to 1991.

Exclusive: Labor leader Bill Shorten will tonight honour the memory of his late mum Ann Shorten, with a plan to overhaul cancer treatment in Australia and tackle affordability. He will declare the next election will be another referendum on Medicare
https://t.co/acnQRL9TEl pic.twitter.com/WUfFv5Yljt

Drawing on the memory of his late mother, Ann Shorten, who battled breast cancer, Mr Shorten said while he could not pledge to deliver a cure for cancer he could guarantee that Labor will reduce the soaring out-of-pocket costs.

“One in two of us will be diagnosed with cancer at some stage in our life,” he said.

“And one way or another, we all witness the ordeal.

“I saw it with my mum and her battle with breast cancer, my cousins and the BRCA gene.

“For so many people, cancer makes you sick and then paying for the treatment makes you poor. And that’s a fact that I think a lot of Australians would be surprised to learn.”

Mr Shorten said many Australians “might not realise that all those vital scans and tests and consultations with specialists aren’t fully covered by Medicare”.

“Australia has the highest rates of skin cancer in the world – and most people pay over $5000 for the first two years of their treatment,” he said.

“One in four women diagnosed with breast cancer pay over $10,000 for two years of scans and tests. Some men with prostate cancer are paying more than $18,000.

Labor will also guarantee that “every single MRI machine in Australia that meets a national quality standard is covered by Medicare for cancer scans”.

“Every drug recommended by the independent experts will be listed on the Pharmaceutical Benefits Scheme,” Mr Shorten said.

“Under Labor if you are battling cancer, you can focus on getting well, without worrying about going broke.”

Mr Shorten pledged to match the Morrison government’s doubling of the tax offset to $1080 for low- and middle-income earners.

“But the Liberal tax plan doesn’t do enough for the 2.9 million Australians who earn less than $40,000.

Bill Shorten announces more tax relief for people earning less than $45 000 a year. Here’s the table (provided by Labor) illustrating the tax offsets being offered by each party: #auspol pic.twitter.com/AJ6RLlUpQG

“Tonight, I am pleased to say that Labor will provide a bigger tax refund than the Liberals for 3.6 million Australians.”

These changes do not represent any change to Labor’s existing tax policy announced in 2018.

They deliver a more generous tax cut to workers earning under $40,000 simply because Labor’s tax-free threshold is more generous.

Labor will repeal more than $100 billion in tax cuts for higher-income earners, including Scott Morrison’s pledge to reduce the 32.5 cent tax rate to 30 cents.

“This isn’t a tax plan, it’s a ticking debt bomb:”

Mr Shorten said Labor would forge ahead with negative gearing reforms from January 1 to stop “patronising millions of young Australians with lectures about cutting back on smashed avo”.

“If you want to use it on new homes, you still can. But we cannot have property investors playing with loaded dice against our young people, Generation Y and the millennials.”

Mr Shorten said the climate change debate had “poisoned this Parliament for 10 years – and paralysed this government”.

“Climate change is real,” he said.

“It’s doing real damage to our economy and our environment. For the sake of the Australia we hand on to our children, a Labor government will take real action on climate change.”

Labor will also uncap university places, creating up to 200,000 new places and pay the upfront fees for 100,000 TAFE places to get more Australians training in high-priority courses.

“If we win the next election, we will put back every single dollar the Liberals have cut from public schools and public hospitals,” he said.

A five-minute guide to the budget reply

Labor has identified transport plans and projects “ready to go” in every state and territory. They include Cross River Rail in Brisbane, Western Sydney Metro, Suburban Rail Loop in Melbourne, Bridgewater Bridge in Tasmania, South Road in SA, Metronet in Perth, upgrading roads around Kakadu, and Phase 2 of the ACT light rail.

It also pledged $1.5 billion to upgrade the Gateway Motorway from Bracken Ridge to the Pine River, and the next stage of the Bruce Highway from Brisbane’s northern suburbs to Caboolture.

Having highlighted that election will be “a referendum on wages”, Mr Shorten committed to an undertaking to legislate to restore Sunday and public holiday penalty rates in our first 100 days. “We will stop companies using sham contracts and dodgy labour hire arrangements to cut people’s pay,” Mr Shorten said.

Guarantee 15 hours of universal access to pre-school or kinder for every three year-old and every four-year-old in Australia for 40 weeks a year.

Billed as “the most important investment in Medicare since Bob Hawke created it”, the $2.3 billion plan includes $600 million towards eliminating all out-of-pocket costs for diagnostic imaging. Over four years, this will mean six million free cancer scans.

Outlining that “we cannot have property investors playing with loaded dice against our young people”, Mr Shorten said negative gearing will continue for new homes and existing properties.

A vow to take “real action” on climate change. This includes a $2000 payment to families who install a battery storage system.

“Climate change is real. It’s doing real damage to our economy and our environment,” he said.