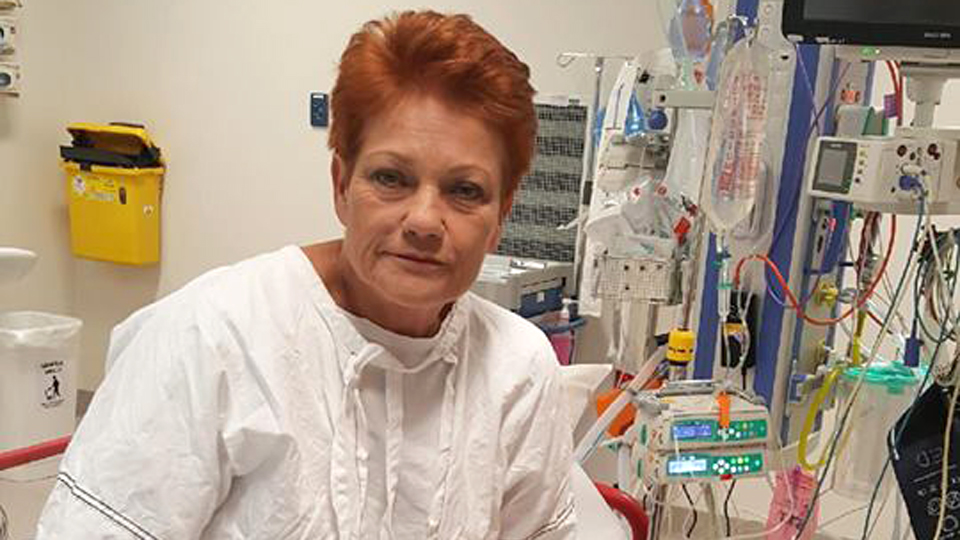 A smirking Senator Fraser Anning has brushed off being censured by the Senate for his comments on Muslim immigration, while Pauline Hanson claimed she could not attend Wednesday’s vote because of a second serious health scare in as many weeks.

Senator Anning’s claim that Muslim immigration was to blame for March’s mosque massacre that claimed 50 lives in Christchurch sparked outrage, prompting calls to censure him or suspend him from the Parliament.

But One Nation, Senator Anning’s former party – which he quit to sit as an independent just a day after being sworn in as a senator – abstained from the vote, insisting it would not be “led like sheep”.

Senator Hanson explained her absence from parliament on Wednesday by posting a picture to social media of her in a hospital gown. She revealed she had just had an emergency operation to remove her appendix.

“Over the weekend I felt extraordinarily unwell. At first, I thought it was a case of food poisoning so I just took it easy,” Senator Hanson said.

“I woke yesterday morning to continued pains in my stomach and decided to see a GP. I was told I needed further scans and blood tests and was taken immediately to the hospital.

“Surgeons determined I needed an emergency operation to remove my appendix. I plan on being back on my feet tomorrow.”

The One Nation leader’s latest health scare follows claims she was “unrecognisable” after a tick bite before she surfaced at a media conference last Friday to respond to al-Jazeera’s How to Sell a Massacre documentary. It features covert surveillance of her chief of staff and a Queensland senate candidate discussing the big donations they might secure in the US from groups that want to water down Australia’s gun laws.

Ms Hanson had a week of medical treatment to reduce swelling in her face from the tick bite. But there was still a large bite mark on her right cheek when she fronted the media last Friday.

In parliament on Wednesday, Senator Anning also complained about Prime Minister Scott Morrison’s response to student Will Connolly cracking an egg on the senator’s head in Melbourne.

“I was the victim of a physical attack in Melbourne,” Anning said.

“While those who don’t like me may have been delighted to see me attacked, we might have expected a statesmanlike response from the Prime Minister condemning that action. Not at all.

“It may have only been an idiot with an egg this time but there is a continuum which begins with this, and ends with a fanatic with a gun or a bomb.”

Ultimately, the Greens motion in the Senate on Wednesday to suspend Senator Anning from parliament was rejected by the major parties 40-10. They argued the move would simply give him more publicity.

However, the Senate did vote overwhelmingly to censure Senator Anning. No senator opposed the motion, so no formal vote was recorded.

Drawing on her history of migrating to Australia as a child of a mixed-race marriage, Labor’s Penny Wong reminded the Senate that when her parents, Jane Chapman and Francis Wong, married, the White Australia Policy was still in place.

“There are times in our history where our bipartisanship has enabled us to confront racism and hatred,” she said.

“The White Australia Policy being abolished; the introduction of the Racial Discrimination Act; the confrontation of One Nation in its previous incarnation; the acceptance of so many Indo-Chinese refugees despite community concerns and dealing with them – this was bipartisanship.

“It is a great sadness … as an Asian-Australian … to see the way in which some on the other side do not honour that history.

“I would make the point that the Senator who is the subject of this censure motion, in his first speech, argued for a return to the White Australia Policy. Do you know my parents married when the White Australia policy was still in place and it was abolished by Liberal and Labor governments?”

Fresh health scare for Hanson as Fraser Anning gets ticked off