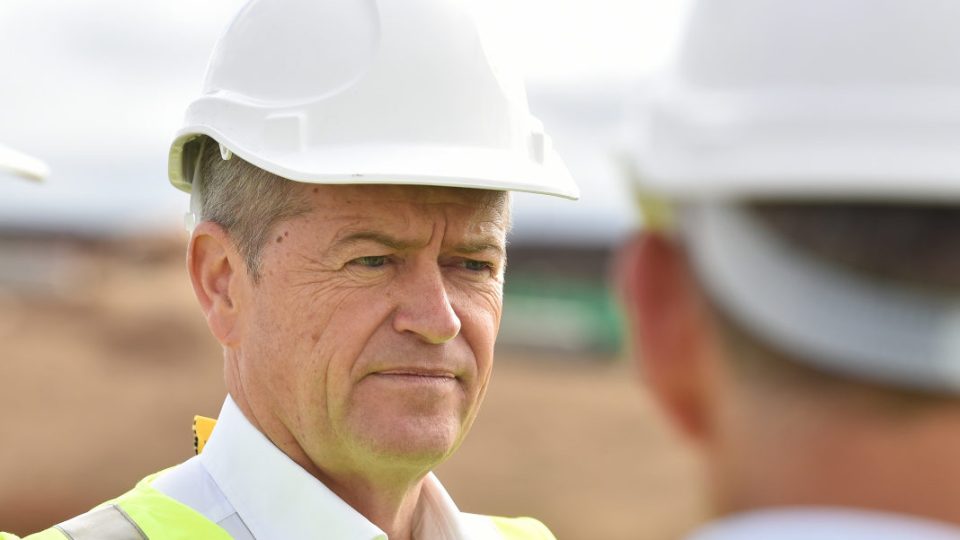 Bill Shorten announced on Monday that, if elected, he will retain the Morrison government’s own pollution cap to meet Labor’s more ambitious targets to reduce emissions.

The strategy is purpose-built to blunt Coalition attacks and specifically pledges no tax or carbon trading mechanism.

But despite it being an existing Coalition scheme – expanded to include more polluters – Mr Morrison said the revamped Labor version was “just another tax”.

“Let me make two points about this. The first one is Bill Shorten does not have a plan, he just has another tax. That’s all this is,” he said.

“What we’ve got here is a re-Rudd of failed policy that cost jobs, that cost businesses, that will cost Australians at least $9000 a year with the reckless targets that Bill Shorten will make law.”

Labor’s climate change policy, announced on Monday, would establish a national target of 50 per cent of new car sales being electric vehicles by 2030, while retaining and extending the Coalition’s existing pollution cap.

Under the policy, a new vehicle emissions standard will also be established. Labor insists it will ultimately bring down the cost of driving a car.

Instead of a carbon tax or carbon-pricing mechanism, under a Shorten government, eligible businesses will be offered the right to sell or “bank” credits when they cut pollution under the existing cap, which will be extended to more polluters.

As MPs return to Parliament for Tuesday’s budget, Labor is moving to an election footing, with Mr Morrison expected to call the election as soon as next weekend.

“Labor’s approach isn’t about punishing polluters, it’s about partnering with industry to find real, practical solutions to cut pollution, in a way that protects and grows industry and jobs,” Mr Shorten said.

“The Liberal Party is full of climate sceptics and hopelessly divided on climate change – Scott Morrison even brought a lump of coal into Parliament instead of a climate policy.”

“Cleaner cars and transport aren’t just good for the environment, they are cheaper to run,” Mr Shorten said.

“But Australia lags behind our competitor countries, whether it’s in electric vehicle take-up, or vehicle fuel efficiency.

“We have 10 times lower electric vehicle take-up than the global average, and we’re at risk of being left behind.”

Labor’s strategy will also include a government electric vehicle target of 50 per cent of new purchases and leases of passenger vehicles by 2025.

Up-front tax deductions will be offered for electric vehicles bought for business purposes, and companies will be allowed to immediately deduct 20 per cent depreciation for EV vehicles valued at more than $20,000 as part of private fleets.

Labor will establish a new vehicle emissions standard, arguing motorists are paying as much as “$500 each year more at the bowser than they should be, as well as seeing pollution on our roads skyrocket”.

“Labor will consult on the timeline and coverage of vehicle emission standards to ensure consumers are made significantly better off, and aim to phase in standards of 105g CO2/km for light vehicles, which is consistent with Climate Change Authority advice,” the policy documents state.

“These are sensible standards which will bring Australia’s cars into line with those in the US, which has a similar car fleet to ours, but won’t be as stringent as those operating in the EU.

Labor will retain and extend the existing “safeguard mechanism”  established by Malcolm Turnbull, arguing business doesn’t want to redesign the scheme from scratch.

About 250 of Australia’s biggest industrial polluters will be captured by the new threshold for the pollution cap – 0.01 per cent of all businesses.

But agriculture will be excluded. Electricity-sector facilities will also be excluded and dealt with separately under Labor’s energy plan.

“Businesses will be able to make money out of cutting pollution by earning credits for reducing pollution below their baselines, which they can then sell or ‘bank’ to meet their future pollution cap,” the policy document states.

While embracing the architecture of Mr Turnbull’s original policy, Labor will argue that the Coalition has “failed to make this mechanism effective in bringing down pollution, or incentivising reduction of pollution below a facility’s baseline”.

“Labor has listened to industry and stakeholders who desperately want stability after this chaotic government. They don’t want to start from scratch with another mechanism. Industry feedback has been unanimous. Businesses want Labor to expand the safeguard mechanism, and we’ve listened,” the document states.

Labor wants to establish a new threshold of 25,000 tonnes of direct CO2 pollution annually and is pledging to consult industry on the timing of the changes and how quickly they are phased in.

Labor will offer tailored plans for steel, aluminium and cement to ensure they face comparable impacts from climate change policies as their competitors.

Labor has previously announced $2000 rebates for solar batteries for 100,000 households, with a target of a million batteries by 2025.

Kyoto credits will not be used to meet Paris targets

As expected, Labor will not allow the use of Kyoto credits to meet its Paris targets.

“By allowing the carryover of Kyoto credits, the Liberals’ already weak target effectively falls from 26 per cent to 16 per cent,” the policy documents state.

“Using Kyoto credits is fake action on climate change, and Ukraine is the only other country in the world to confirm they will do this.”

Labor will also re-establish the Climate Change Authority that was abolished by the Abbott government.