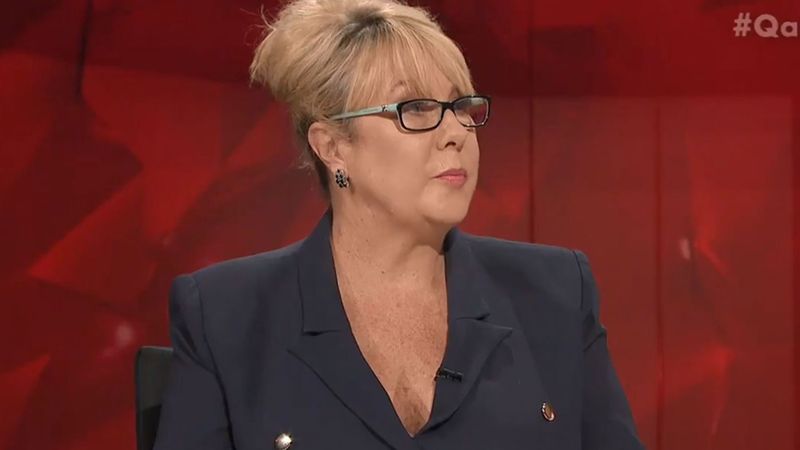 Teena McQueen was groaned at by the audience during her debut on Q&A. Photo: ABC/Q&A

Liberal Vice President Teena McQueen shocked the Q&A audience when she publicly defended Donald Trump, described Milo Yiannopoulos as an “entertainer” and claimed white supremacy is “not growing” in Australia.

Making her Q&A debut, Ms McQueen began the program by rushing to the US President’s defence as the release of Robert Mueller’s report into collusion between the Russian government and the Trump campaign was discussed.

Does the Mueller Report now give President Donald Trump a free hand to do whatever he wants? #QandA pic.twitter.com/a1DibD66gA

Ms McQueen falsely declared Mr Trump had been “exonerated” by the Mueller report, which found no evidence of collusion with Russia.

“There’s nothing there. I mean, it’s two years of wasted presidency, two years of the Democrats going crazy and, you know, he did nothing to interfere with the report,” she said.

To make it seem she knew exactly what she was saying, Ms McQueen then made reference to the pair’s brief meeting when Mr Trump was running Miss Universe pageants.

“I think I may be the only person here that’s actually spent time with Trump,” she said.

“He was not racist, not sexist, none of those things.”

Have watched #Qanda professionally for five years. Have never seen a trainwreck on the level of Lib federal VP Teena McQueen. Who let her do this? @Qanda

Feminist author and fellow panellist Roxanne Gay provoked applause from the audience when she shot back at Ms McQueen, saying “just because you didn’t have an experience with him doesn’t mean he hasn’t done these terrible things”.

Ms McQueen went on to defend Mr Trump’s “grab her by the p***y” comments.

“I just made a joke about a cock earlier on,” she said. “I don’t think there’s much difference there.”

“I joke about bodies constantly, it’s awesome, but I’m not going to talk about grabbing a woman’s body just because I have an attraction to her. It’s called self-control,” she explained.

“They follow him. They pay money to go see him speak,” she said.

“The vile language used against conservatives is disgraceful”.

“To imply that somebody who is standing up against racism is guilty of the same sort of hate speech as the people who have allowed the hatred that we’ve seen in the last couple of weeks to fester and to have a base and be legitimised by so many people — it just doesn’t add up,” Mr Burke said.

In response to a video question about the rise of neo-Nazism in Adelaide, Ms McQueen advised they simply “call the police and you get these people dealt with and carted away”.

With signs of neo-nazi activity in Adelaide, am I in danger? #QandA pic.twitter.com/vpngRpsqhe

“Perhaps I’m in a bubble – I don’t see the growth of white supremacists that I hear constantly,” Ms McQueen said after host Tony Jones pressed her about whether she understood why people were scared.

“I mean, I’ve been to Adelaide many times, and I’m not doubting the questioner there, but if you see evidence of something like that, there’s laws to protect people from that, and you get them carted off and deal with them,” she said.