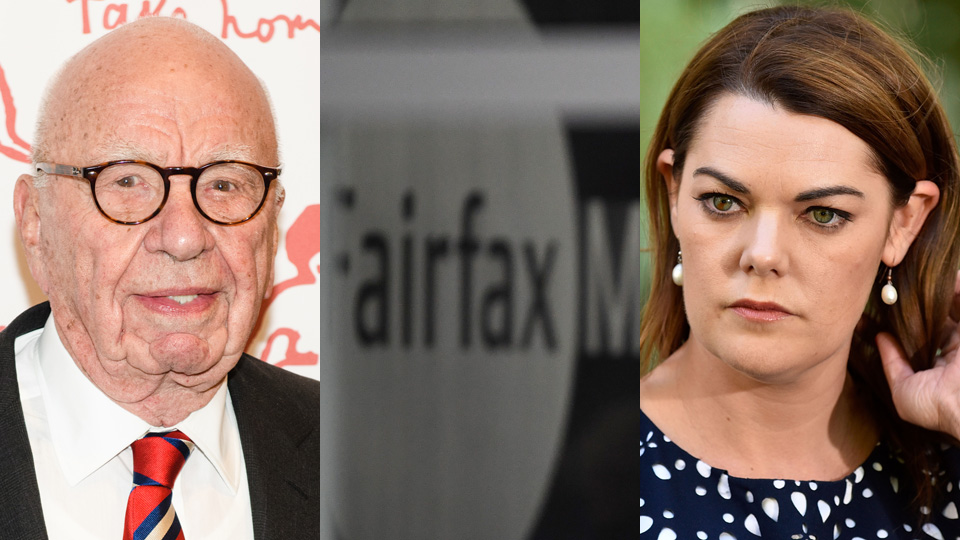 Rupert Murdoch's News Corp and the former Fairfax Media empire are in the sights of the Greens' Sarah Hanson-Young. Photos: Getty

The Greens have unveiled a media reform package to consider the break up of big media corporations including News Corp and Fairfax, a crack down on “fake news” on social media, and extending tax deductibility status for media subscriptions.

Warning that the Christchurch massacre was a wake-up call for media outlets, the Australian Greens said the recent example of convicted criminal and right-wing extremist Blair Cottrell being invited on Sky News, Nine, Seven and the ABC suggested the regulator needed to have stronger powers.

“Broadcasters can now invite neo-nazis and far-right extremists onto their programs for panel discussions without facing any penalty from the regulator,” Greens Senator Sarah Hanson-Young said.

“This mainstreams and normalises extremist ideology that further emboldens hate speech, which puts public safety at risk,” she said.

“Subscription services like Sky News and online news streaming should not have a lower level of scrutiny, especially when they are broadcast in so many public spaces and so many people are moving to consuming their news online.”

While the sweeping reforms are unlikely to ever be legislated, they do provide a roadmap for the Greens’ preferred position on any future media reform to be considered by Parliament.

“Australians from all walks of life are concerned about the role the news and social media are playing in people’s lives,” Greens media spokesperson, Senator Hanson-Young said.

“In an era of ‘fake news’, tragedies like we saw in Christchurch, and countless examples like the treatment of (AFLW star) Tayla Harris, it’s easy to see why.

“We have one of the most concentrated media markets in the democratic world. Whether it’s traditional media or new social media, for too long the rules have put profits ahead of the public interest.”

To boost ‘public interest journalism’, the Greens are proposing to extend tax breaks for media subscriptions and for philanthropic donations to new, independent sources of news.

“We will also provide a tax incentive for Australians who want to engage with public interest journalism by extending the tax-deductible status of news media subscriptions, donations and purchases to all Australians,” Senator Hanson-Young said.

“This will apply to news media organisations in Australia that adhere to appropriate standards of practice for public interest journalism.

Senator Hanson-Young also pledged to apply a “microscope on the digital giants as well, with a full review of social media”.

“Our transparency measures will shine a light on the dodgy digital advertising practices that are taking dollars for journalism away from publishers,” she said.

The last major review of media called for the Productivity Commission to conduct a review into the media.

The Greens are proposing a new public interest test, as recommended by the 2012 Convergence Review and the ACCC, which would apply to changes in control of nationally significant media enterprises.

This would include media outlets with an Australian audience of at least 500,000 per month; and a minimum revenue of $50 million per year derived from supplying media content in Australia.