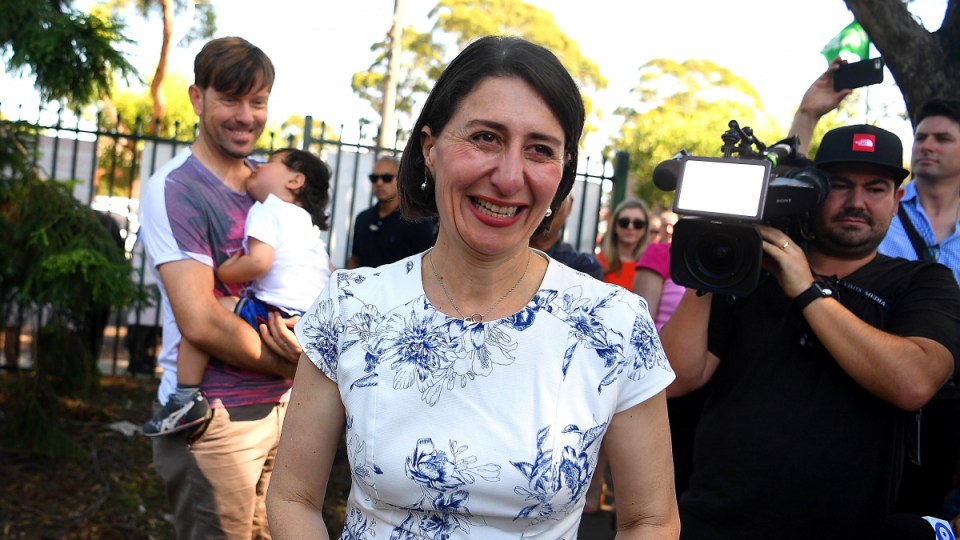 New South Wales Premier Gladys Berejiklian has claimed victory for the Coalition in a result she predicted will give hope to Scott Morrison.

Her historic win ensures she is the first female ever elected by voters in New South Wales and the first Coalition government to secure a third term in 50 years.

As counting resumed on Sunday, Nrs Berejiklian was sweating on winning one more seat to allow the coalition to govern in its own right.

With 65 per cent of the lower house votes counted, the Coalition had 46 seats – 34 for the Liberals and 12 for the Nationals.

Labor held 35, well short of the 47 seats needed to form a majority government.

“What is most important to me is that no matter what your background, where you live, what your circumstance, everyone in this state has a chance to be their best – a state in which someone with a long surname and a woman can become the premier of NSW,” Mrs Berejiklian said.

While the Coalition remains quietly confident it can govern in its own right, final counting over coming days will determine if she has secured a majority.

“Tonight is about the people of New South Wales and the future of our state,” she said on Saturday night.

“Whether or not my government is a majority or minority government we will work closely with the three minority parties.”

Earlier, the NSW Premier said the result was in the hands of voters.

“We know it will be a tight result and it is up to the people of NSW to decide,” Ms Berejiklian said.

It will also be the first time in 50 years that a NSW Coalition government has secured a third term.

Mr Daley issued an unqualified apology for his remarks about “Asians with PhDs”, which were caught on tape during a Politics in the Pub event last year.

Earlier, Prime Minister Scott Morrison took to the stage, sporting a dramatically shorter haircut, before the Premier vowed to help re-elect his government.

“But ladies and gentlemen, we know – we know – that, in a few months, our party will be in a battle as well. And I want to tell the Prime Minister, Scott Morrison – who’s here this evening – we will do everything we can to support you and your government’s re-election,” she said.

Treasurer Dominic Perrottet said he was still hopeful that the Berejiklian Government would be elected with a majority and not require the support of independents.

“That’s the plan. We want to govern in our own right,” he said.

The swing against the Coalition was a modest 2 per cent.

The Liberals secured a primary vote of just 32.8 per cent, based on votes counted last night, with the Nationals on 9 per cent and Labor on 33 per cent.

Both the major parties primary vote was hit with the swing going to independents. Labor looked set to pick up only a handful of seats including Coogee with a swing of 5.4 per cent.

Defying predictions, the Shooters and Fishers’ Party secured a swing towards it of 3.1 per cent. The party also looked set last night to pick up the seat of Murray.

Her opponent, Labor leader Michael Daley, conceded defeat on Saturday night as it became clear the government would be returned, possibly with an outright majority in the lower house.

Mr Daley’s campaign lost momentum during its final week after he was forced to apologise for remarks he made a year ago about “Asians with PhDs” taking jobs from local graduates.

The defiant Labor leader last night vowed to defy predictions that his leadership could be challenged after the election loss.

“Whilst, of course, I’m disappointed in the result tonight, I am so proud of your efforts. I became the leader of the Labor Party 134 days ago,” he said.

“I had a short time to do what I needed to do. I thought that would be enough time to get across the state and certainly we have done about 10,000km or more in our big red bus, but it just wasn’t long enough. But I can tell you that it is my intention to remain the leader of the party. ”

NSW Labor MP Jodi Mackay said it was not time to talk about changing the leader again after 130 days of Michael Daley.

“No, I don’t. In fact, I think we were surprised at how well we did. I think it could have been catastrophic for us and it wasn’t,” she said.

Mr Daley issued an unqualified apology for his remarks about “Asians with PhDs”, which were caught on tape during a Politics in the Pub event last year. But he did not mention his mistake in last night’s concession speech.

The Liberal Party sat on the devastating material for months, before rolling it out to maximum effect in the final week of the campaign.

The political strategy quickly proved deadly, with Labor frontbencher Chris Minns, the spokesman for water, who had been touted as a future leadership contender, facing a big swing in his seat of Kogarah, which as a strong Asian-Australian community.

Asked on Channel Seven what the impact would be if that trend continued, he said he would lose the seat.

“The feeling on the booths was pretty rough to be honest. At the moment I have absolutely no idea. It was extremely tough in the seat in the last week. That’s the reality we have got at the moment. The message from the Labor Party all along is we love the Chinese-Australian community.”

The furore over the NSW Labor leader’s comments is likely to immediately reignite leadership speculation within the Labor Party, with Mr Minns touted as one option, if he can hang on to his seat.

“I won’t say that they were racist comments. They were very, very poorly worded comments and he apologised for that,” Labor MP Jodi Mackay said.

“Do I wish he said those? No. Do I agree with what he said? No. But I do think that it did not help our case for forming government.”

Asked if the National Party’s leadership turmoil at a federal level was unhelpful, NSW Treasurer Dominic Perrottet said, “I would agree with that.”

“One of the reasons that the Coalition has had such success tonight in New South Wales is because Gladys as leader and Dom as deputy leader have made sure it is a united force.

“Scott Morrison’s doing that with the Liberal Party federally and some of those errant Nationals need to learn that message as well.”

Asked what his message to Barnaby Joyce was, Mr Zimmerman said: “Spend more time in Tamworth and less time on TV.”

ABC election analyst Anthony Green complained of “the slowest count he’s ever seen” with the result not clear by 8pm.

But 15 minutes later, Green was predicting a Berejiklian win – although he remained cautious given the number of votes counted.

“So at the moment, it just looks like the Berejiklian government has been returned,” he said.

“On the numbers I’m looking at the moment, it’s probably in the majority as well. But as I’ve said, I’ve had some difficulty with some of these seats, so I’m inclined to be cautious as to whether it’s a majority or minority.”

The Premier’s youngest sister, Mary Berejiklian, made her mark on the campaign when she unleashed on trolls on the Premier’s Instagram page, saying comments made about her sister’s “bird nose” were “disgusting”.

On Saturday night she played a final cameo, arriving at the election night party in a sequinned disco suit.

The Premier @gladysb ‘s sister has turned up at Liberal HQ wearing the wildest disco silver suit I’ve ever seen . Can we expect similar bold fashion from the Premier? #nswvotes #nswpol pic.twitter.com/I9rjuafwrg