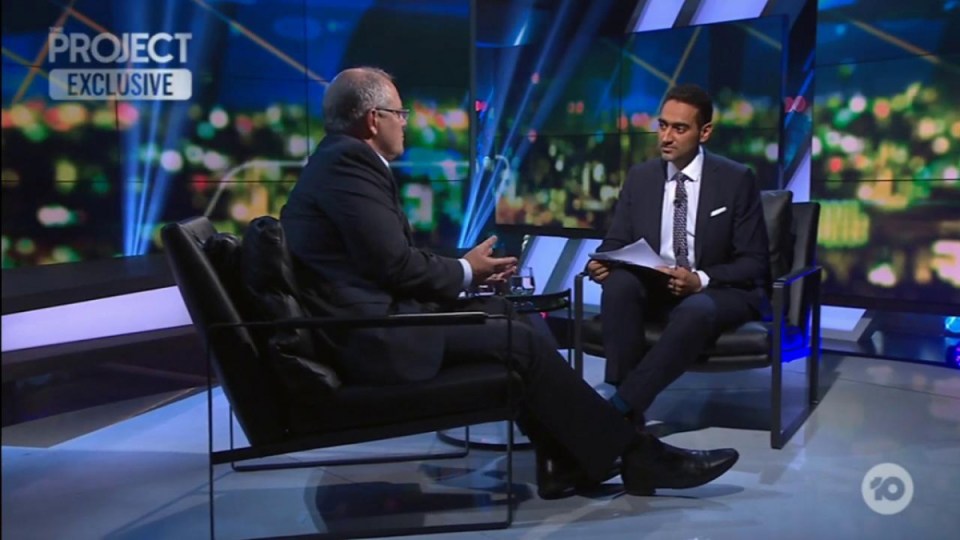 Prime Minister Scott Morrison has confirmed he raised concerns over the “anti-Muslim” sentiment of voters during a 2010 shadow cabinet meeting, but insists it was only to “address them, not exploit them”.

Mr Morrison went head to head with The Project‘s Waleed Aly in a testy 30-minute interview on Thursday night, during which he also accused the broadcaster of “sugar-coating” the risks of the medical evacuation legislation for asylum seekers.

It is the first time the PM has admitted the discussions on “anti-Muslim” sentiments occurred, after describing claims he had sought to capitalise on the fears as “an ugly and disgusting lie” just 24 hours earlier.

The New Daily broke the news on Monday that the Prime Minister’s office was so incensed by Aly’s original editorial that noted the 2011 reports that it warned the program the claims were “defamatory” in a furious phone call.
It was that feud that set the scene for Thursday night’s clash.

Waleed Aly asks: ‘Who is lying?’

Broadcaster Aly asked the Prime Minister: “You say that this never happened. You’ve called it a smear and a lie. Who is lying?”

Mr Morrison then blamed two “unnamed sources” in shadow cabinet – Liberal MPs – for twisting the truth of the meeting into “a lie”.

“What is suggested is that I said that we should exploit – exploit – concerns about Islam in the community to our political advantage,” Mr Morrison said.

During a tense discussion over Islamophobia he launched a passionate defence of his work with Muslim communities, dating back to the Cronulla riots, and insisted Muslims “hugged him” when he visited mosques.

“Our party is made up of a lot of individuals. And in our party individuals have a lot more freedom … to say what they think than a lot of other parties.”

When Aly asked the Prime Minister about former Liberal MP Andrew Robb’s on-the-record confirmation that he had discussed anti-Muslim sentiment, Mr Morrison confirmed he had discussed it in the meeting.

“Well, I was the shadow immigration minister at the time. And I was very concerned about these issues and the way people were feeling in the community,” he said.

“I was concerned that we needed to address them. Which is what I have been doing inside and outside of the Parliament for the last 10 years of my life.

“Yes – to lower them. I was acknowledging that there were these fears in the community and we had to address them, not exploit them.”

Just 24 hours earlier, Mr Morrison abruptly shut down a press conference when he was asked, “Those that did attend the meeting told the Sydney Morning Herald in 2011, quote, that Scott said, ‘What are we going to do about multiculturalism?’

“I’m going to stop you there. I’ve already addressed this issue today. It is an ugly and repugnant lie,” Mr Morrison said.

“I reject it absolutely 100 per cent and my record of working with the Muslim community in Sydney in particular speaks volumes for my track record. Any suggestion to the contrary, I find utterly offensive. Thank you.”

TND political editor @samanthamaiden pressed Scott Morrison on reports he called for the Liberal Party to capitalise upon anti-Muslim sentiment at a 2010 shadow cabinet meeting.

But Mr Morrison said he now wanted to explain exactly what had occurred.

“I want to rule a line under this issue. It never happened. I have always been deeply concerned about attitudes towards people of Muslim faith in our community,” he said.

PM @ScottMorrisonMP: "Waleed, you've gotta be honest with people. And if a bill that was put forward and supported by the Labor Party was going to be creating risks… I'm not gonna sugarcoat it. There are real risks." #auspol #TheProjectTV pic.twitter.com/E2DAwAaenj

The Prime Minister also challenged Aly not to “sugar-coat” the risks of bringing asylum seekers to Australia with criminal records after Aly asked why he was framing them as “rapists and murderers”.

“We are not going to sugar-coat to the public the implications of laws passing the Parliament,” Mr Morrison said.

“And Waleed, it’s important that you don’t either. I am sorry mate, sometimes you could be accused of it.

“Let me put this to you, Waleed: How many rapists and murderers should be transferred to the Australian mainland?”

In a tense exchange, Mr Morrison defended Peter Dutton over his claim that Greens Senator Mehreen Faruqi was “as bad as Fraser Anning” for suggesting the Liberals had fostered the Islamophobia that led to the massacre.

“Do you think it’s reasonable for any senator to say that the Prime Minister and the Minister for Home Affairs was responsible for the terror attacks in Christchurch?” Mr Morrison asked.

“Well, I think it’s reasonable that Peter might have found that quite offensive and in the heat of the moment …”

Aly then interjected, “Oh, so it was a heat of the moment thing? Is that what you are saying?”

Mr Morrison then accused Aly of being “emotional” during his Friday night editorial, which has been viewed more than 12 million times when he raised concerns the Liberals have a history of Islamophobia.

“Waleed, the other night you were very emotional and I am sure you may have said some things about me that based on our conversations since that you think may have been a bit over the top,” Mr Morrison said.

Mr Morrison then said: “You implied that Muslims couldn’t feel safe because they had a Prime Minister who somehow is prejudiced against them.”

But Mr Morrison ended the interview with a plea for voters to respect his sincerity on fostering good relationships with the Muslim community.

“Don’t pre-judge me. I know what my values are,” he said.

Both men ended the interview by shaking hands.