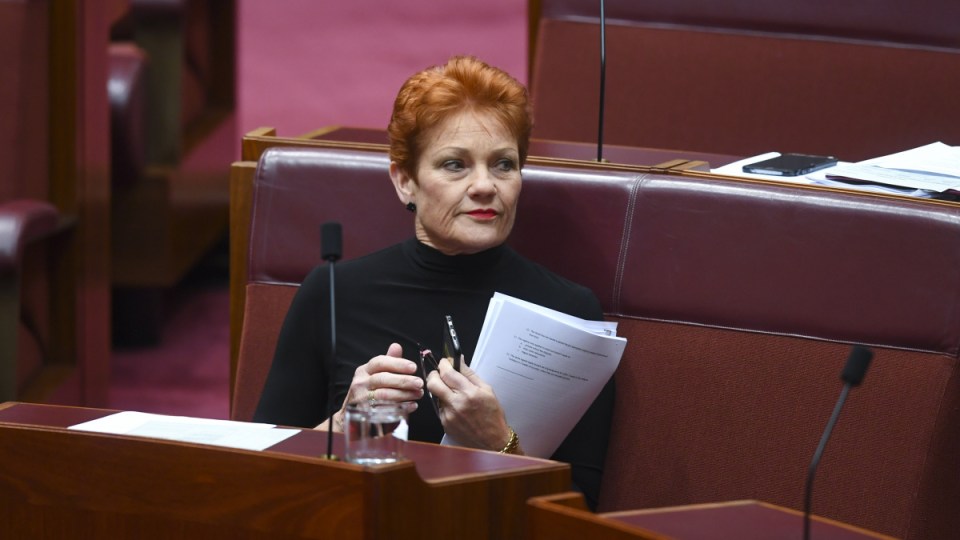 Pauline Hanson was unable to drum up significant support from her Senate colleagues. Photo: AAP
exclusive

Scott Morrison has left the door open to putting the Greens last on the ballot paper despite pledging he will offer “no deals” with Pauline Hanson’s One Nation.

The Prime Minister has been careful not to guarantee he will put One Nation last on how-to-vote cards repeatedly dodging the question over the last 24 hours.

The issue of One Nation preferences has flared again after Pauline Hanson refused to support a bipartisan motion of censure in Parliament over Queensland Senator Fraser Anning’s shocking comments that Muslim migration was to blame for the New Zealand mosque massacre.

Queensland MPs have told The New Daily they do not support putting One Nation last and want “left extremists” the Greens at the bottom off the ballot paper.

“First of all, preferences, as you know, are determined by the party organisation,” Mr Morrison said.

“Secondly, our policy, which is unchanged – it hasn’t changed in recent days. It was the position stated by the former Prime Minister – won’t be doing deals with One Nation.”

“Our policy is not to deal with One Nation.”

Liberal Party sources said they are not ruling out putting the Greens last, simply they are not “doing deals” with One Nation.

Liberal National Party MPs told The New Daily it was “a joke” that the party was trying to distance itself from One Nation after the Christchurch massacre and the comments of Queensland Senator Fraser Anning.

“We take Pauline Hanson’s vote every day in the Senate. Five times a day. Ministers negotiate with her. They beg for her support,” a LNP MP said.

The debate has resurfaced after Pauline Hanson’s refusal to support a censure motion against Senator Anning for his claim that Muslim migration was to blame for the Christchurch massacre.

Veteran senator Ian Macdonald told The New Daily that if it was his choice he would put the Greens at the bottom of the ballot.

“I always think we should put the Greens last,” he said.

“Preference decisions are the responsibility of the campaign headquarters.”

Liberal National Party MP Llew O’Brien, the Member for Wide Bay, said he was deeply concerned about the Greens policies on illicit drugs.

“I wouldn’t rule out putting the Greens last,” he said.

“My default position is to put the Greens last because of their economic policies and drug policies. They are very pro injecting rooms and drug testing at concerts and all of the things like that.”

Liberal National Party MP Scott Buchholz said the Greens were a bigger threat to the economy than One Nation.

“With the Liberal National Party, individual seats don’t negotiate their preference deals. The party decides that,” he said.

“But if the state secretary was reaching out to me, I would say the greater risk to my electorate is the Greens.

“As far as preferencing, I would put the Greens last. And I think historically that’s what we do.”

Mr Buchholz said he remained confident that Mr Morrison will win the election and that he was “bringing back” One Nation voters to the party in Queensland.

“Scott is doing a good job bringing them back,” he said.

“They understand him. He’s seen as a real bloke.”

“If the prime minister feels it is better for the Liberals to flow their preferences to the economy-destroying Greens and Labor before One Nation, Australian voters will react,” Senator Hanson warned.

Labor leader Bill Shorten challenged the PM to guarantee he will put One Nation last.

“I get that the current prime minister doesn’t want Labor to win, that’s his opinion. We don’t want them to win. This nation, though, has to work together much more than we are. And it’s not just fine words, it’s actions that count,” Mr Shorten said.

“I invite the government, it will be up to them to see if they have the courage of their convictions, but Liberal and Labor, the Nationals and the Greens, we’ve got to form a ring, a bond, which stops the crazy extremists from getting oxygen both by our commentary and by our preferences at the next election.”

PM may still put Greens last, despite One Nation pledge