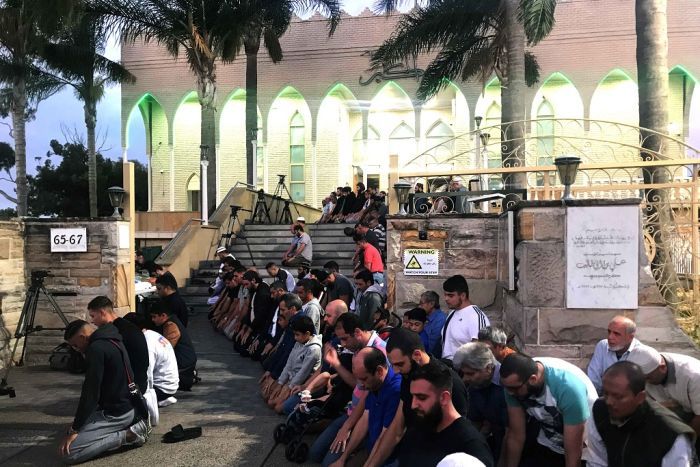 Hundreds of people gathered to pray for the victims at Australia's largest mosque in Sydney's south.

A man rammed a car into the front of a Queensland mosque in one of a number of security scares that have global authorities on alert for Christchurch massacre copycats.

A 23-year-old has been charged after allegedly driving into the gate of a Logan mosque, south of Brisbane, and yelling at Islamic worshippers who were praying inside.

The man had allegedly tested positive in a roadside drug test on Saturday before driving his car into the mosque gates about 7pm.

Police in Victoria, meanwhile, have revealed they are monitoring far-right extremists so officers can take swift action on anyone planning to incite violence in solidarity with Friday’s attacker.

Queensland Imam Syed Wadood Janud said the community was in a “state of shock” over the mosque ramming but that it would be united against hate.

“What has this world come to? We must not let hate win. The outpouring of love and solidarity overshadows this random hate crime,” he said.

Premier Annastacia Palaszczuk and the state’s police commissioner Ian Stewart later stood with the Muslim community, telling the crowd racism and ignorance had no place in Queensland.

“We are your police department. We work for you,” Mr Stewart said.

“We are here for you. We will listen to you and we will take your complaints, your stories, seriously.”

Earlier, London police were forced to take swift action when a group of men allegedly shouted Islamophobic abuse outside a mosque in the city’s east.

One of the men then allegedly hit a 27-year-old man with a hammer.

Police and intelligence agencies across the world are now working together to probe Brenton Tarrant’s movements in the months before the attack, and find out whether he had connections to anyone else who could be a threat.

Victoria Police Commissioner Graham Ashton said that while there was no specific threat, the force had “intensified” its watch on “dozens” of people with far-right beliefs.

Western Australia Police Force Commissioner Chris Dawson said with the threat of terrorism in Australia slated as probable, all people must be vigilant.

“We must stand by our community irrespective of our faith, of our culture and our beliefs. We are Australian,” Commissioner Dawson said.

He said police would ramp up patrols and safety measures around places of worship.

WA Premier Mark McGowan led the charge to condemn the terrorist attack while meeting with Islamic leaders in Perth on Sunday.

“What an abhorrent act of violence it was that took place on Friday,” Mr McGowan said.

“We have made our society work the best of anywhere in the world and we can’t allow people to divide that.”

Some mosques around Australia opened their doors to the public on Sunday to show “peace and love” would prevail over hatred, with thousands of people from a range of faiths offering messages of support in solidarity with the Muslim community.