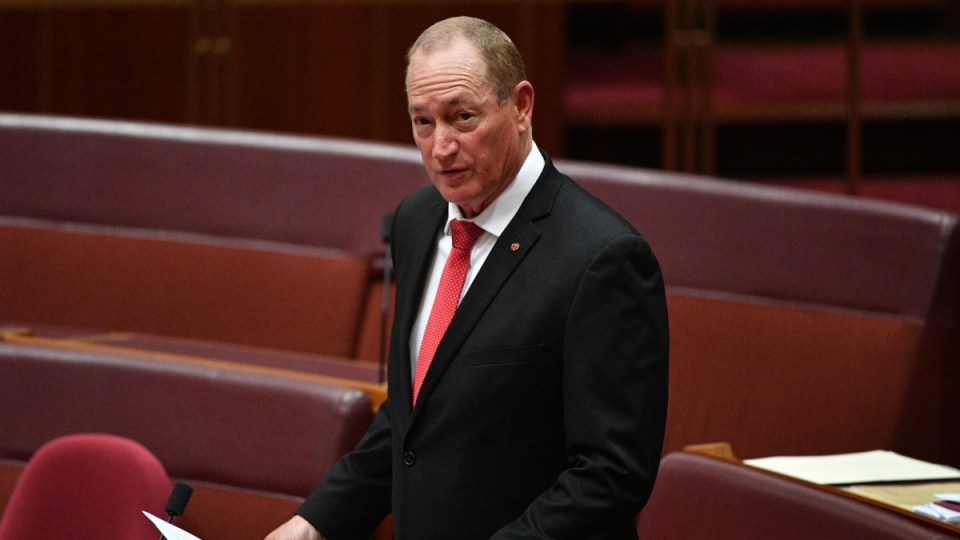 Fraser Anning's maiden speech including a reference to the "final solution" on immigration. Photo: AAP

Scott Morrison has declared there is no place in Parliament for the “disgusting” views of Fraser Anning after the Queensland senator blamed Muslim migration for the massacres at Christchurch mosques on Friday.

In a press statement released after it emerged 49 men, women and children were dead after attacks on two mosques on Friday, Senator Anning claimed that “while Muslims may be the victims today, usually they are the perpetrators”.

“Worldwide, Muslims are killing people in the name of their faith on an industrial scale,” he said.

The real cause of bloodshed on New Zealand streets today is the immigration program which allowed Muslim fanatics to migrate to New Zealand in the first place.”

“The remarks by Senator Fraser Anning blaming the murderous attacks by a violent, right-wing, extremist terrorist in New Zealand on immigration are disgusting,” Mr Morrison said.

“Those views have no place in Australia, let alone the Australian Parliament.”

The remarks by Senator Fraser Anning blaming the murderous attacks by a violent, right-wing, extremist terrorist in New Zealand on immigration are disgusting. Those views have no place in Australia, let alone the Australian Parliament.

Earlier, the Prime Minister confirmed than an Australian national had been arrested among the group suspected of plotting and carrying out the attacks.

“I can confirm that the individual who was taken into custody, I have been advised, is an Australian-born citizen and obviously that element of the investigation Australian authorities are involved in,” Mr Morrison said.

The social media posts including screenshots of Senator Anning’s press statement appeared to have been removed by Twitter last night, but the senator doubled down posting “Does anyone still dispute the link between Muslim migration and violence?”

“Together with Bill Shorten, I and other members condemned Fraser Anning’s appalling maiden speech on August 15 last year. I concluded with a reminder that we must have zero tolerance for hate speech,” he said.

“Fraser Anning’s comments today are contemptible. He is a disgrace to the Senate and what is worse by spreading hatred and turning Australians against each other he is doing exactly what the terrorists want,” he tweeted.

Fraser Anning’s comments today are contemptible. He is a disgrace to the Senate and what is worse by spreading hatred and turning Australians against each other he is doing exactly what the terrorists want.

Senator Anning’s maiden speech including a reference to the “final solution” on immigration. He later claimed that he was unaware this was the official code name for the genocide of the Jews by the Nazis in World War II.

In January, Labor called on the federal government to stop accepting Senator Anning’s vote on legislation.

It followed revelations he had spent $10,000 in taxpayer funds to attend at least three far-right meetings, including a melbourne rally where protestors made Nazi salutes.

The protests were organised by convicted extremist Blair Cottrell, who was banned from Sky News after he was invited on to discuss immigration, sparking a huge backlash after it emerged he had previously expressed his admiration for Hitler.

In a statement, Labor leader Bill Shorten said any attack on a religion was an attack on all religions.

“Australia and New Zealand are family and we grieve with our brothers and sisters today,” he said.

While families in Christchurch mourn for loved ones they’ve lost, an obscure Australian Senator saw this act of terrorism and tragedy as an opportunity to blame the murder victims.

“Attacks such as this are designed to spread fear and sow division. So too is the footage the terrorists have sought to circulate online. We echo the words of the New Zealand police: do not share this footage, do not watch it. Do not do anything to normalise or validate this inhuman act of evil.”

‘Contemptible’: Fraser Anning blames Muslim victims before the bodies are even cold