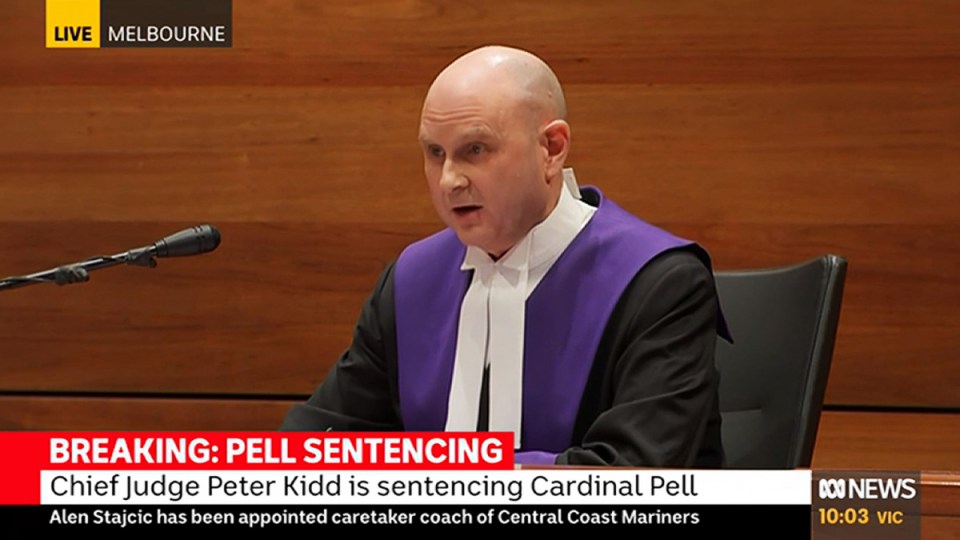 As Chief Judge of the Victorian County Court, Peter Kidd sentenced Cardinal George Pell on Wednesday to six years in jail, with a non-parole period of three years and eight months.

It marked another extraordinary episode in the stellar legal career of the Adelaide-born-and-trained judge, known for his work on high-profile cases prosecuting murderers, drug traffickers and war criminals.

Investigative journalist Lucie Morris-Marr broke the story that Pell was under police investigation, and covered every day of the Cardinal’s trial and retrial for The New Daily.

“He was the most impressive individual … someone at the peak of their career,” says Morris-Marr of Judge Kidd, and his oversight of the case.

“We were all just absolutely blown away by him,” she said, adding that her impression was that he was supremely fair and hard-working during the case that has attracted the world’s attention.

“It’s amazing that there are humans in the world like that,” she says. “[He is] a credit to the justice system … he knew the case inside out.”

Educated at Prince Alfred College and the University of Adelaide, Judge Kidd worked as a solicitor for law firm Mallesons Stephen Jaques before moving into the Office of the Commonwealth Director of Public Prosecutions (DPP).

After four years at the DPP, he was promoted to principal legal officer.

Judge Kidd, 53, appeared in the prosecution of Leslie Camilleri, who is now serving a life sentence for the abduction, rape and murder of Bega teens 14-year-old Lauren Margaret Barry and 16-year-old Nichole Emma Collins.

Judge Kidd was also part of the prosecution team that pursued Bandali Debs and Jason Roberts for the murder of police sergeant Gary Silk and senior constable Rodney Miller.

He was presented with the Victorian Chief Commissioner of Police’s Commendation for his work on the case – an award previously limited to Victoria Police officers.

He later worked as counsel assisting ASIC’s mammoth investigation into the collapse of the HIH Insurance Group.

Then, after studying a Masters of Law in Switzerland, Judge Kidd was appointed an international prosecutor of the War Crimes Chamber of the Court of Bosnia-Herzegovina.

He prosecuted the commander and guard shift leaders from the Omarska and Keraterm concentration camps as lead counsel.

In the late 2000s, Judge Kidd returned to Victoria, where he took silk and became senior crown prosecutor, leading the case against drug kingpin Tony Mokbel before eventually being appointed as chief judge of the Victorian County Court.

According to a speech by then-president of the Victorian Bar, James Peters QC, upon Judge Kidd’s appointment, his working style is characterised by intense concentration and single-mindedness.

“[But] my spies also deny that your honour is all work and no play,” Mr  Peters said in the address.

“You are known to, perhaps once or twice a year, to exhibit the qualities of what is, I believe, known as a ‘stayer’.

“After the Criminal Bar Dinner at Matteo’s, you were seen at another bohemian haunt in Brunswick Street, ‘rocking on’ with congenial professional colleagues.”

He went on to describe Judge Kidd as “a master of facts with a sound understanding of law and legal principle [whose] arguments were always clearly, concisely and articulately put”.

“Above all, your honour is regarded as a model of fairness and common sense.”

Judge Kidd is also notable for his approach to the media and its coverage of the justice system.

Last year he publicly criticised the Victorian media for its coverage of so-called “gangs” of young Sudanese men in Melbourne.

“I can say that in general terms, most of our work, the vast, vast majority of our work does not involve Africans,” he told ABC’s Four Corners.

“If you are an African offender, and certainly if you’re an African youth of South Sudanese background from the western suburbs of Melbourne, rest assured your case will be reported upon.

“The media choose to report upon those cases. That creates an impression that we, that our work, a very significant proportion of our work is taken up with African youths from the western suburbs of Melbourne. That’s a false impression.”

Judge Kidd imposed the suppression order that kept Pell’s trials a secret in Australia (although it received broad international coverage), but lifted it when the prosecution abandoned further charges against Pell for lack of evidence. With the suppression lifted, the world discovered that Pell had been found guilty in December of sexual crimes against two choirboys.

Mr Richter, in his argument to mitigate the sentence of his client, argued that Pell’s crimes should be seen at the “low end of offending”.

Judge Kidd appeared incensed by the argument, saying the attacks on the boys were “brutal and brazen”.

“And at the time he thought he could get away with it,” Judge Kidd said.

Pell will appeal against his conviction.

This article first appeared on InDaily