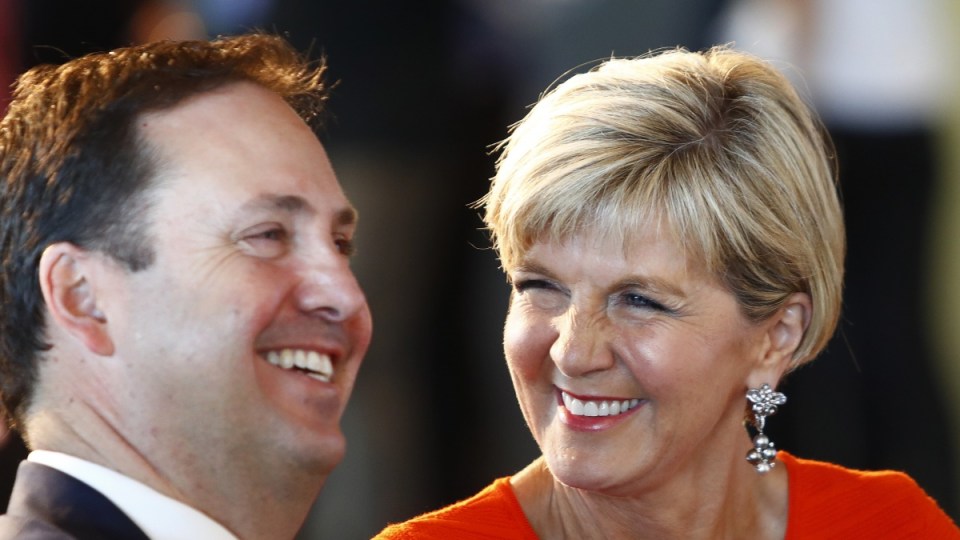 Julie Bishop, who will leave a huge gap in the Coalition ranks, with Steve Ciobo. Photo: AAP
analysis

Another one bites the dust. Make that two. Or perhaps even four. Four more senior members of the Morrison government are expected to soon announce that they’re abandoning ship at the upcoming federal election in May.

Word spread quickly on Friday that both the senior and junior defence ministers, Christopher Pyne and Steve Ciobo, would be announcing their impending retirements from the federal Parliament this weekend.

This would bring the number of Coalition ministers and ex-ministers retiring from federal politics at this election to 10. Those exiting stage left also include Julie Bishop, Kelly O’Dwyer, Michael Keenan, Nigel Scullion, Luke Hartsuyker and failed sugar daddy Andrew Broad (who was a very junior minister).

The only other similar exodus of senior MPs in recent political history was the mass retirement of seven former Labor ministers and one former prime minister at the 2013 federal election. This occurred after Kevin Rudd was returned to the prime ministership in the dying days of that Labor government.

The big difference between then and now is that all but one of those retirements were of ‘former’ ministers, who’d already returned to the backbench for a variety of reasons.

Nicola Roxon stood down from the ministry and flagged her retirement to spend more time with her young family, while Simon Crean and Martin Ferguson moved to the backbench after unsuccessfully trying to force Mr Rudd to a leadership challenge.

Four others – Julia Gillard, Peter Garrett, Greg Combet and Craig Emerson – did the same after Mr Rudd became PM again. Only Stephen Smith remained in the ministry after announcing his decision to retire at the election.

The glaring contrast is that Scott Morrison may be losing six currently serving ministers, five at the Cabinet level, who between them represent many decades of political, parliamentary and policy experience. Mr Morrison (or his successor) may have to recall former Howard government ministers currently languishing on the backbench to shore up the experience deficit after the election.

The ministerial exodus will also damage the Liberal Party in a more fundamental way if Christopher Pyne, Marise Payne and Craig Laundy do follow Julie Bishop and Kelly O’Dwyer out the door.

Each of these parliamentarians fought to keep moderate (or progressive) Liberal views alive within their state divisions of the party, waging a battle that has stretched over decades in some cases and has seen very few wins other than marriage equality. Their loss will have a huge influence on the post-election Liberal Party, leaving any remaining progressive Liberal MPs essentially leaderless and exposed to the predation of the remaining conservatives.

In advance of this weekend’s anticipated announcements, Opposition Leader Bill Shorten rightly said that “cabinet ministers retiring on the eve of an election shows that this is a government that has given up”.

Given his close involvement in the events that brought on much of the Labor minister exodus of 2013, Mr Shorten is better qualified than most to make that observation. But there is another element of Mr Shorten’s statement of the bleeding obvious that should be considered.

If the resignations are announced as expected, it will also be telling that so many of the senior moderates have signalled their lack of faith in the post-election Coalition.

The ministerial exodus being endured by Scott Morrison is not only a vote of no confidence in the government, it’s a signal that senior Liberal moderates have raised the white flag and given up the fight for progressive values within their party.