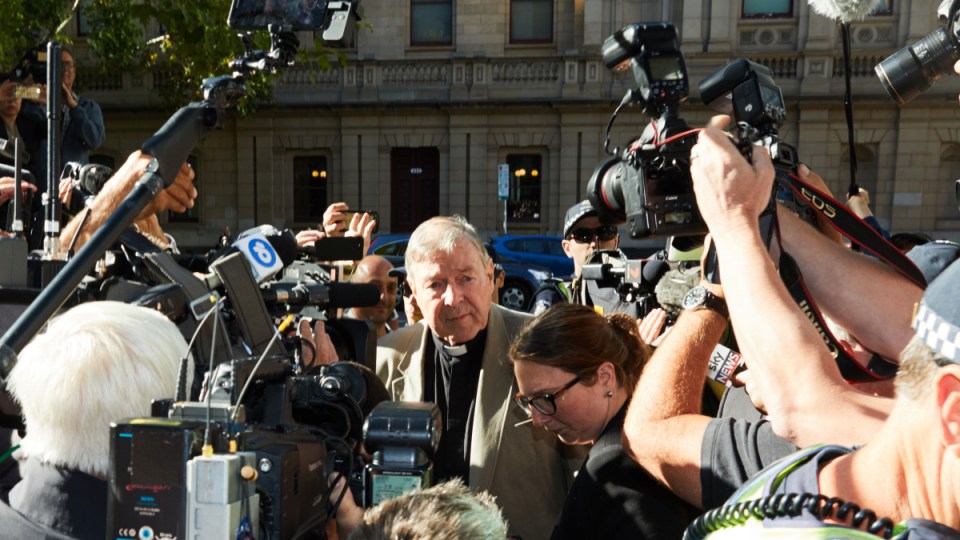 Thirty-six news agencies and individuals have been called to a Supreme Court hearing. Photo: AAP

Cardinal George Pell has lodged an appeal after being found guilty on five charges of sexually abusing two boys in the 1990s.

But there are many defending him. Some question the verdict, others say it is inconsistent with his character.

Many of his defenders didn’t attend the trial, and weren’t exposed to the days’ worth of evidence presented to the court.

News Corp columnist Andrew Bolt believes Pell is innocent: “He is a scapegoat, not a child abuser.”

In his column for the Herald Sun, Bolt went on to say he’d met Pell about five times and liked him.

“The man I know seems not just incapable of such abuse, but so intelligent and cautious that he would never risk his brilliant career and good name on such a mad assault in such a public place.”

Bolt’s News Corp colleague Miranda Devine made a similar claim, that Pell was the victim of a “lynch mob” and “sacrificial lamb” for the Church’s abuses.

“They hate him because he is a conservative Catholic, the implacable enemy who stood in the way of ‘progress’ in the Church. While fellow Catholics crumbled and appeased, he unequivocally defended Church teachings and refused to compromise over gay marriage, euthanasia, abortion, or wedge issues such as communion for divorcees. And now they think they’ve won,” she wrote.

“Devastating … for the friends of Cardinal Pell, and as you say, I am one. Devastating for all who believe in the Catholic Church, and I’m also one of those,” Mr Abbott said on 2GB radio.

Mr Abbott conceded he had “spoken to him’’ but it took persistent questioning by 2GB radio’s Ben Fordham for Mr Abbott to concede on Wednesday that he called him after the verdict was handed down.

“I have spoken to George Pell. I have spoken to him,’’ Mr Abbott said.
“I have spoken to him. I spoke to him yesterday. It was a call I put into him.”
Mr Abbott was also repeatedly asked if he would still call Cardinal Pell a friend if the conviction was upheld on appeal and said this was a hypothetical question.
“I absolutely accept that this is a shocking result, a devastating result, but it is subject to appeal,” he said.
“Certainly for the friends of Cardinal Pell, and as you say I am one, devastating for all who believe in the Catholic Church, and I’m also one of those.
“This is a grim time, no doubt about that, but I also have faith in our system of justice and let’s see what the system of justice ultimately produces.
“Yes, he has been convicted, he has been found guilty, and as the prime ninister said, no one is above the law … but let’s wait and see what the law ultimately produces.
“It certainly doesn’t sound consistent with the man I have known.”
Mr Abbott was then asked about previous allegations that Pell had not acted strongly enough to protect victims and expose pedophiles in the past, such as priest Gerald Ridsdale.
“I would be the last person to say that anyone has always acted perfectly. I know if I look back on my own life … I’ve made many mistakes, we all do. It’s certainly possible at a time like this to make very harsh judgements about people, I accept that,” he said.

Another former PM, John Howard, was one of 10 people to write a character reference for Pell, tabled in court on Wednesday, after learning of his conviction.

Former PM John Howard on George Pell AFTER he was found guilty of abusing two children: “None of these matters alter my opinion of the Cardinal.” @9NewsMelb pic.twitter.com/9TNcAKSULP

Conservative Liberal MP Craig Kelly went on Facebook to claim there seems to have been “a grave miscarriage of justice”.

“I’m not a Catholic and no doubt the church has covered up pedophile priests that deserve to burn in hell – but I agree with Andrew Bolt, as on the reports of the evidence, this seems a grave miscarriage of justice.”

Father Frank Brennan said he had read most of the court transcript and believed there were “improbabilities” in the case.

“Pell has been in the public spotlight for a very long time. There are some who would convict him of all manner of things in the court of public opinion no matter what the evidence. There are others who would never convict him of anything, holding him in the highest regard,” Father Brennan said in his piece for Eureka Street.

“The criminal justice system is intended to withstand these preconceptions. The system is under serious strain, however, when it comes to Cardinal Pell.”

Lyle Shelton – who ran the ‘No’ campaign for the Australian Christian Lobby (ACL) during the same-sex marriage debate, and is now with Cory Bernardi’s Australian Conservatives – shared the Brennan and Devine articles on Twitter.

He added: “Like all Australians, I’m deeply angered by clergy child sex abuse. It is abhorrent & the church has behaved poorly towards victims. But today’s #cardinalPell verdict is worrying for reasons Fr Frank Brennan explains. Has an innocent man been condemned?”

Also standing by Pell was the Archbishop of Melbourne Peter Comensoli, who said he would visit his friend in prison “as soon as I can get in”.
 
“I am making this distinction between what I believe and what I know or in fact don’t know,” the Archbishop said in an interview with 3AW radio.
“I stand by my friends. I stand by victim friends, too. I’ve done that in the past and will continue to do so. It’s how you be a good friend.”

Greg Craven, the vice-chancellor of the Australian Catholic University, accused the media and Victoria Police of combining to “form a pro-conviction cheer squad”.

“This is where the Pell case has gone terribly wrong. Impartial judge and jury accepted, parts of the media – notably the ABC and former Fairfax journalists – have spent years attempting to ensure Pell is the most odious figure in Australia. They seemed to want him in the dock as an ogre, not a defendant,” he wrote in The Australian.