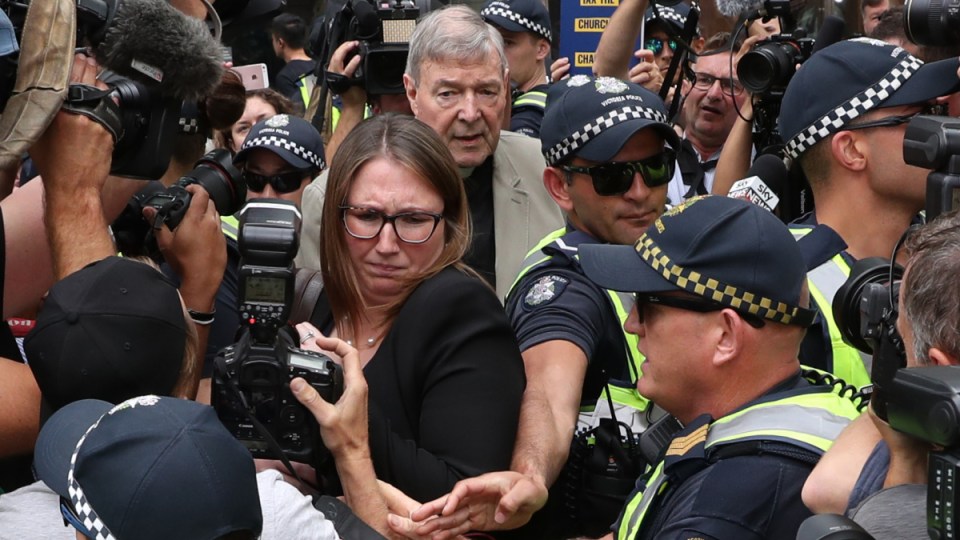 One of the victims of Cardinal George Pell’s sexual abuse says he “trusted someone we should have feared and we fear those genuine relationships that we should trust”.

The man, now a father of a young family, also pleaded for space and time to cope with the ongoing court process in the wake of news that Pell had been found guilty of five sexual abuse charges.

The man cannot be named for legal reasons.

His statement was read out by his lawyer, Vivian Waller, outside the Victorian County Court in Melbourne on Tuesday.

“Like many survivors I have experienced shame, loneliness, depression and struggle,” it said.

“Like many survivors, it has taken me years to understand the impact upon my life.

“At some point, we realise that we trusted someone we should have feared and we fear those genuine relationships that we should trust.”

The man was one of two St Kevin’s College students, aged 13 and 12, abused by Pell in Melbourne’s St Patrick’s Cathedral in December 1996 and February 1997.

Pell was found guilty of their abuse in December 2018 but the verdict was suppressed due to another trial on other charges.

“I am a witness in a case brought by the state of Victoria. I have put my trust in the police and the criminal justice system,” the man said in his statement.

“The process has been stressful and it is not over yet.

“I need space and time to cope with the ongoing criminal process.”

He appealed to the media to respect his privacy, and keep his identity secret.

“I want to protect my young family and my parents,” he said.

“I am not a spokesperson about child sexual abuse.

“I am just a regular guy working to support and protect my family as best I can.”

Meanwhile, the father of the other choirboy Pell has been convicted of abusing has said he will sue the cardinal or the Catholic Church following his son’s death.

The son never told his parents about the abuse, and died of a heroin overdose in 2014.

Given the guilty verdict made public on Tuesday, the boy’s father said Pell had “blood on his hands”.

She said he turned to drug use when he was 14 and his father learnt of Pell’s abuse only “some time” after his death.

“We believe his death is directly linked to those conditions that he suffered as a result of the abuse,” Ms Flynn said.

“[He] suffered such extreme depression that he overdosed on drugs to numb his severe PTSD as a result of his pain.

“His father will allege that Pell has blood on his hands.”

Ms Flynn said the Catholic Church or Pell individually could be pursued in civil action.

“We’ve been instructed to investigate a potential claim. It could be either or both of those that would be named as defendants,” she says.

Ms Flynn said the law firm was waiting for Pell’s criminal matters to be finalised before filing a civil claim.

In a statement on Tuesday, Pell’s lawyers said he had always maintained his innocence and continued to do so.

They said an appeal had been lodged against his conviction, and he would await the outcome of that process.

“He will not be commenting in the meantime,” lawyer Paul Galbally said.

Disease concern for survivors of Afghanistan earthquake
Steve Smith confirmed as starter for first Test against Sri Lanka
Matildas will be keen to forget 7-0 drubbing by Spain
Upcoming stats will reveal where and how hard rates are hitting economy
Victorian MPs pocket a tidy 2.75 per cent pay raise
Reserve Bank review isn’t a ‘get the governor’ exercise: Jim Chalmers
Why we couldn’t publish the world’s biggest story
Today's Stories

Pell victims ‘trusted someone we should have feared’