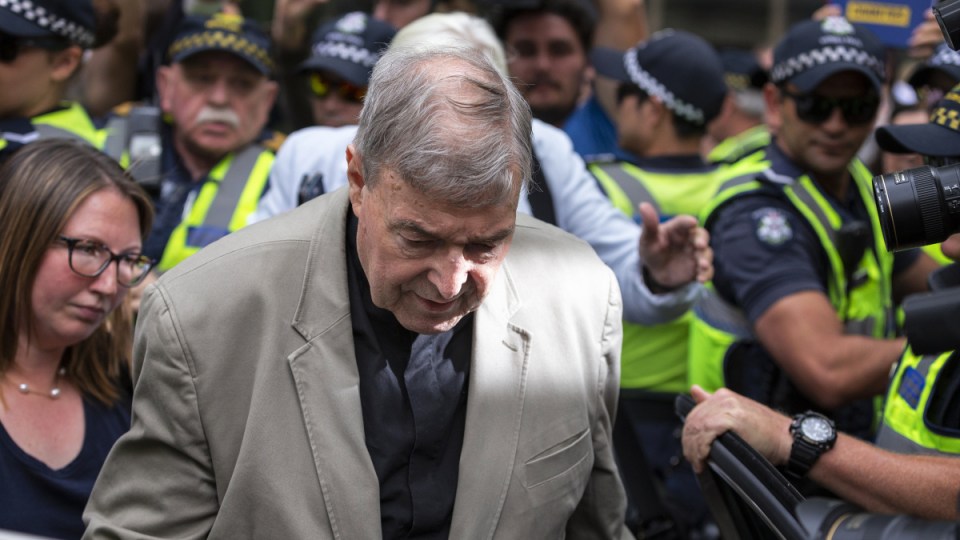 Cardinal Pell leaves the court on Tuesday after a decision was made to lift a gag order suppressing the guilty finding against him. Photo: AAP

Cardinal George Pell was verbally attacked on Tuesday amid angry and violent scenes in Melbourne after it was revealed he had been found guilty of sexually abusing two choirboys.

Outside the County Court of Victoria members of the public shouted “you’re a monster” and “scum” as the 77-year-old was led to a waiting car amid a huge media scrum.

Multiple officers from Victoria Police had to hold back the furious onlookers who pushed towards the cardinal after a media blackout on the high-profile case was lifted on Tuesday morning.

In the crush two photographers were punched and Katrina Lee, the executive advisor for the Archdiocese of Sydney, was seen physically pushing away one man as she protected the cardinal.

Shortly before Pell left the court a second trial dubbed ‘The Swimmers Trial’ – in which Pell was accused of groping boys in a Ballarat swimming pool in the 1970s – collapsed due to lack of evidence.

Judge Peter Kidd then lifted a strict court suppression order allowing the media to report that Pell was found guilty on December 11 of attacking two choirboys, aged 13 and 12 at the time.

Ballarat-born Pell, who will be remanded in custody tomorrow and sentenced in the next week for up to 14 years, is the most senior Catholic figure in history to be convicted of a crime.

His legal team launched an appeal against the conviction on February 21.

News of his child sex attacks, committed at Melbourne’s St Patrick’s Cathedral in 1996 and 1997 when he was Archbishop of Melbourne, will now heighten the global child sex scandal buffetting the Holy See.

One of the choirboys, who cannot be named for legal reasons, issued a heart-rending statement through his lawyer Viv Waller, telling how he had experienced “shame, loneliness, depression and struggle”.

The 34-year-old Melbourne father, who does not wish to reveal his identity, said: “Like many survivors it has taken me years to understand the impact upon my life.

“At some point we realise that we trusted someone we should have feared and we fear those genuine relationships that we should trust.”

The victim, a graduate working in the building industry, described himself as a “regular guy” who is working to support his family.

Meanwhile it was revealed that the father of the second choirboy, who died in 2014 aged 30 of a drugs overdose, is planning to launch a civil action saying his son’s death was a direct result of the attack by Pell.

His lawyer, Lisa Flynn of Shine Lawyers, told The New Daily; “Our client really believes that the abuse was the cause of his son’s psychological difficulties, which led to his drug abuse and which then led to his death.”

If Pell fails in his appeal against the conviction, he will likely be defrocked by Pope Francis.

The news of Pell’s conviction comes just days after Pope Francis held a special summit on the child abuse crisis in Rome with more than 190 senior bishops in attendance.

He was spared incarceration upon the shock verdict on December 11  because he was due to have knee replacement surgery.

Earlier this month multiple media outlets and journalists were sent letters from the Director of Public Prosecution alleging they had broken the strict suppression order or committed contempt of court when the verdict was handed down.

Ingrid Irwin, a Ballarat solicitor who formally represented two of the men who alleged they were indecently assaulted by Pell in the Ballarat swimming pool, told The New Daily she was “devastated” the Swimmers Trial had been discontinued.

“The men who have gone through a gruelling legal process to this point lasting years will no longer get their day in court,” Ms Irwin said.

“I think alleged victims need to be allowed to have their own lawyers during the process and not just rely on the Crown.”

Outside the court Pell’s solicitor Paul Galbally said the cardinal continued to deny the allegations.

“An appeal has been lodged and he will await the outcome of that process,” he said.

When Pell is remanded in custody, The New Daily understands he will be taken to Melbourne Assessment Prison in the CBD until he is officially sentenced early next week.