After an explosive five-week trial late last year, which has been suppressed until today [Tuesday] for legal reasons, the 77-year-old treasurer for the Vatican could now face a sentence of between 10 and 14 years.

Ballarat-born Pell is the most senior Catholic figure in history to be convicted of a crime.

News of his child sex attacks, committed at Melbourne’s St Patrick’s Cathedral in 1996 and 1997 when he was Archbishop of Melbourne, will now heighten the global child sex scandal buffetting the Holy See.

The news comes just days after Pope Francis held a special summit on the child abuse crisis in Rome with more than 190 senior bishops in attendance.

Pell’s barrister Robert Richter has confirmed he has already lodged an appeal against the conviction.

If Pell fails in his appeal against the charges, he will likely be defrocked by Pope Francis.

The Vatican called the conviction “painful news” but, through spokesman Alessandro Gisotti, said it would not take any immediate disciplinary action.

“We await the outcome of the appeals process, recalling that Cardinal Pell maintains his innocence and has the right to defend himself until the last stage of appeal,” Mr Gisotti said.

Mr Gisotti later confirmed via social media that Pell – who was on leave from his position as Vatican treasurer and whose five-year term as the Prefect of the Secretariat for the Economy expired on Sunday – was no longer in the role.

Despite spending up to $2 million on a top legal team, bankrolled by a trust fund, the Cardinal lost his fight against the charges.

He will not return to Rome and may end his days in a jail cell with his name on the sex offenders register.

The suppression order was lifted on Tuesday morning after a further trial – dubbed ‘The Swimmers’ Trial’ and involving two accusers – collapsed due to lack of evidence.

Those charges, which were dismissed in front of a packed courtroom in Melbourne, related to Pell allegedly groping two boys at a Ballarat swimming pool in the late 1970s.

Pell is due to be remanded in custody at a plea hearing later Wednesday.

He was spared incarceration upon the shock verdict on December 11 last year because he was due to have knee replacement surgery.

A jury of eight men and four women took three and a half days to rule unanimously that the Cardinal, who stepped aside from his role in Rome when he was charged by Victoria Police in June 2017, attacked the boys just months after being appointed as Archbishop of Melbourne in 1996.

Pell looked down in shock as the verdict was handed down at 3.45pm on Tuesday, December 11, at the County Court of Victoria in Melbourne.

During the case, Mark Gibson SC, acting for the Crown, said Pell was still wearing his formal church robes when he caught two boys aged 12 and 13 drinking sacred wine in the priest’s sacristy after mass in St Patrick’s Cathedral, Melbourne.

“He proceeded to remove his robes so to expose his penis,” Mr Gibson said in his opening address of the first trial.

Mr Gibson told how Pell forced the boy into oral sex and then did the same with the other choirboy. He was then accused of touching himself while fondling one of the boys.

About six weeks later, in February 1997, Pell allegedly pushed one of the boys up against a wall in a corridor suddenly, and violently grabbed his private parts.

The surviving accuser, a professional and father based in Melbourne, was accused by Mr Richter of “making up lies” and that his testimony was a fantasy or a “false memory he had come to believe over time”.

Mr Richter told the jury Pell was always accompanied at the cathedral and would have been a “madman” to carry out the high risk and brazen attack after a busy mass service.

Pell himself never took to the stand, instead relying on a video of his interview with two Victoria Police detectives in Rome in October 2016.

In the interview he called the allegations an “outrage”.

Today, it can also be finally be revealed for the first time that between August and September last year there was a first trial on the same charges, which resulted in a hung jury, after five and a half days of deliberations.

In emotional scenes, three female jurors and one male juror were visibly distraught when the judge dismissed them.

At a committal hearing at Melbourne Magistrates Court in March 2018, about 10 charges were dismissed due to lack of evidence – including disturbing allegations that Pell had raped a 10-year-old male orphan in a park, a cinema and on a hilltop.

The orphan had been living at the now-closed St Joseph’s children’s home at Ballarat, but the alleged victim’s dates over when he lived at the home did not support his allegations. 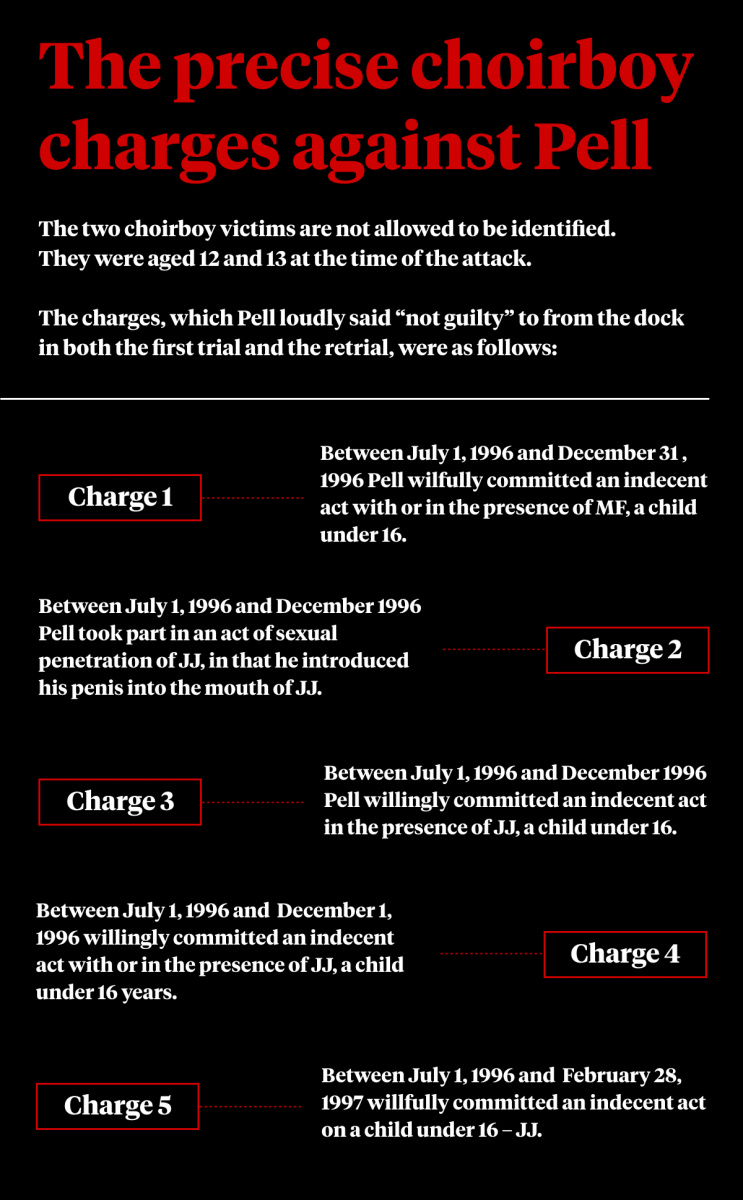