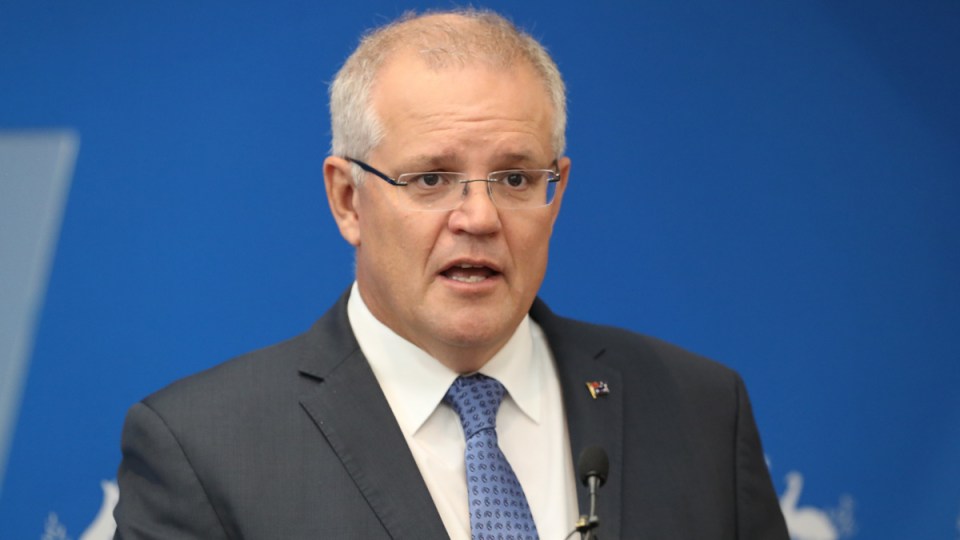 Scott Morrison releases his plans for a Climate Solution Fund in Melbourne on Monday. Photo: AAP

Scott Morrison has declared himself a climate change believer, flagging a $2 billion investment in a rebadged direct action fund that Labor immediately vowed to axe if it wins the May election.

Asked on Monday if he believed in the science of climate change, the Prime Minister told Sunrise’s David Koch that the answer was in the affirmative.

“Yes,’’ he said. “We owe it to future generations to address this issue, and we have been addressing this issue.

“The policies we have put in place are working, they are hitting our targets. There are very few countries in the world that can say that they will not only meet our 2020 targets but exceed them.”

But Mr Morrison – who has repeatedly said the government expects to meet its 2030 Paris emissions reduction targets “in a canter” – was grilled on morning television about why he needed to spend $2 billion extra in taxpayers’ money to do it.

“The 2030 targets will require this additional investment … We always knew that there would be more that needed to be done, and I have said that on several occasions, and I said we’d be announcing that before the election. And today, I’m making those plans clear.

“These are responsible targets. I believe that you can meet your emissions-reduction targets, address climate change and not put a sledgehammer through your economy.”

Former prime minister Tony Abbott has previously described the “so-called settled science of climate change” as “absolute crap” and compared policies to combat it to “primitive people once killing goats to appease the volcano gods”.

Retiring frontbencher Kelly O’Dwyer recently warned the Liberal Party that voters saw it as the party of climate change deniers.

“It’s more than that, because there is the work being done on the Emissions Reduction Fund, there is the investment that will be going into Snowy Hydro 2.0 and also the Battery of the Nation project, another pumped hydro very significant project in Tasmania,” he said.

“It also deals with an electric car strategy and, on top of that, continuing with the energy-efficiency measures, whether it’s in households or businesses. So it’s a comprehensive package.”

“You’ve got to have a responsible target that meets your environmental obligations, which we have been doing, but also supports our economy because our obligation to future generations is to give them a better planet. But it is also to ensure they have got an economy that supports their lifestyle.”

Labor’s climate change spokesman Mark Butler noted that Mr Turnbull famously described Mr Abbott’s direct action policy as a “recipe for fiscal recklessness on a grand scale and a fig leaf to cover its determination to do nothing”.

“What he’s doing is again making your listeners foot the bill for something that big polluters should be doing,” he told ABC radio.

The question, really, is whether people will trust a government that has spent five years trashing climate policy, trashing climate science, led by a Prime Minister who brought a lump of coal into the Parliament, suddenly to have some last-minute conversion in the shadow of an election campaign to take climate change seriously.”

Mr Butler confirmed a Labor government would scrap the fund.

“These sorts of activities should be paid for by the private sector. That’s what would happen under any sort of a scheme, including a properly constructed safeguards mechanism that the government has in place,” he said.

“If you’re serious about climate change, what you would do as a prime minister is to dump their plans to spend even more billions of taxpayers’ dollars on constructing coal-fired power stations.

“You’d return to the table to discuss the National Energy Guarantee, you’d put in place a plan to clean up our light-passenger vehicle fleet, our transport system that has the dirtiest standards in the OECD.”

Mr Butler also described as “utterly laughable” the idea that Labor’s proposed emissions cuts would lead to wage cuts of $9000.

“The only saving grace of that modelling is that it didn’t use the word gazillion,” he said.

“It really was ridiculous and completely inconsistent with even Tony Abbott’s own modelling that he commissioned when he was coming up with his Paris target.”

Mr Butler said that modelling showed the difference in real gross domestic product growth between Labor’s reductions target and Mr Abbott’s was negligible throughout the 2020s.

“If the Liberals were serious about climate change, Malcolm Turnbull would still be prime minister,” he said.

“Instead, Scott Morrison, the Prime Minister who brought a lump of coal into Parliament, has now fully embraced Tony Abbott’s climate policy – a policy that sees taxpayers footing the bill for big polluters.”