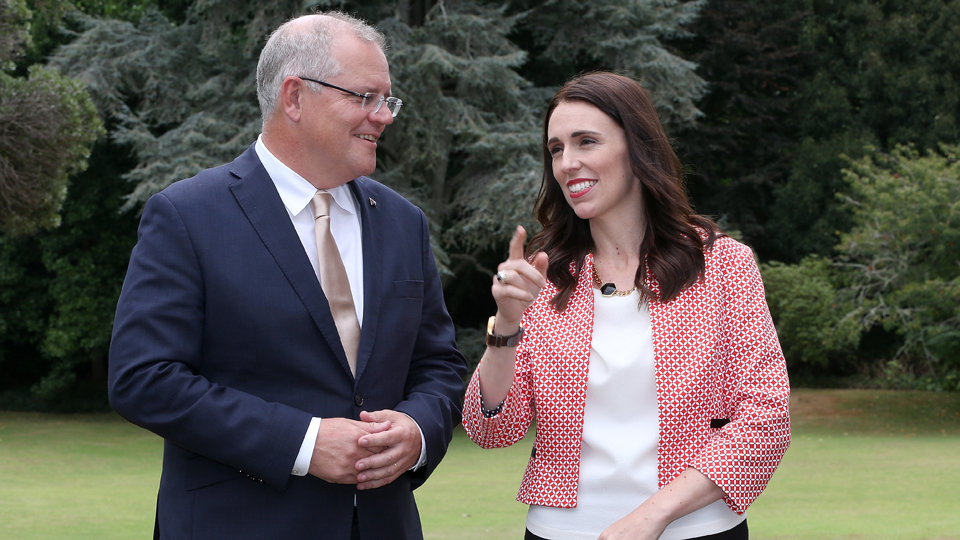 Happier times? Jacinda Ardern and Scott Morrison in Auckland, in the weeks before the pandemic hit. Photo: AAP

Scott Morrison used a whirlwind visit to New Zealand on Friday to reiterate his government’s refusal to take the Kiwis up on their offer to resettle 150 asylum seekers from Australia’s offshore detention centres.

Mr Morrison was in Auckland for only a few hours on Friday, in his first trip across the Tasman as Prime Minister.

That was enough time for his Kiwi counterpart Jacinda Ardern to denounce Australia’s policy of deporting NZ criminals as “corrosive.”

The frank exchange between the PMs came as Mr Morrison and Ms Ardern tackled a handful of lingering and thorny trans-Tasman disagreements  – including the long-standing resettlement offer.

The two PMs also discussed New Zealand’s ongoing concerns about the deportation of its passport holders from Australia since 2014 and citizenship rights for Kiwis.

The involvement – or otherwise – of Huawai in 5G mobile network upgrades on both sides of the Tasman was also thought to be on the agenda.

Australia and New Zealand have both banned the Chinese tech giant from participation in their respective upgrades.

In the usually cordial post-meeting media conference, the language from both leaders was at times unexpectedly frank.

“But in terms of Australia’s security interests and how we manage our borders, we don’t believe it is consistent with that.”

But Ms Ardern’s office said while she had previously expressed a preference for women and children to be accepted first, single men had never been ruled out.

For her part, Ms Ardern described Australia’s policy of deporting Kiwi criminals as “corrosive” to the trans-Tasman friendship.

“I’ve made it clear that New Zealand has no issue with Australia taking a dim view of newly arrived non-citizens committing crimes,” she told the media conference.

“But equally, the New Zealand people have a dim view of the deportation of people who move to Australia as children and have grown up there.”

Later, a defiant Mr Morrison dug in on the deportations.

“Australia has very well-defined immigration and citizenship laws, and our government has taken a very strong line when it comes to those who are in Australia who are on visas,” he said.

“Visas are not citizenship. Visas are provided on the basis of people being compliant with those visas, and that doesn’t include committing crimes.”

Mr Morrison’s ‘G’day’ Twitter post with Ms Ardern prompted an outpouring of derision, with one user saying, “Sorry about your Friday, Jacinda.” 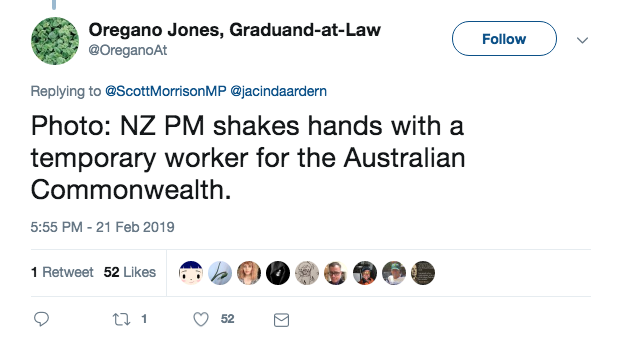 During his half-day in New Zealand, Mr Morrison also fitted in an official welcome at Government House, a wreath-laying ceremony and a meeting with opposition leader Simon Bridges. Then it was home to Sydney in time for dinner.

“‘[We’ll] be engaging in all the things we usually would do,” Ms Ardern said of the brevity of the trip.

“It is understandable, though. The Prime Minister is in an election year and there will be other calls on his time.”

It might have been his first trip as PM to New Zealand, but Mr Morrison is no stranger to the land of the long white cloud. In the late 1990s, he became acquainted with the country’s biggest visitor draw cards as director of New Zealand’s newly-created Office of Tourism and Sport.

Mr Morrison’s predecessor, Malcolm Turnbull had a notable bromance with former NZ PM Sir John Key, while Ms Ardern and Mr Turnbull dined together in Sydney when she visited Australia in 2018.