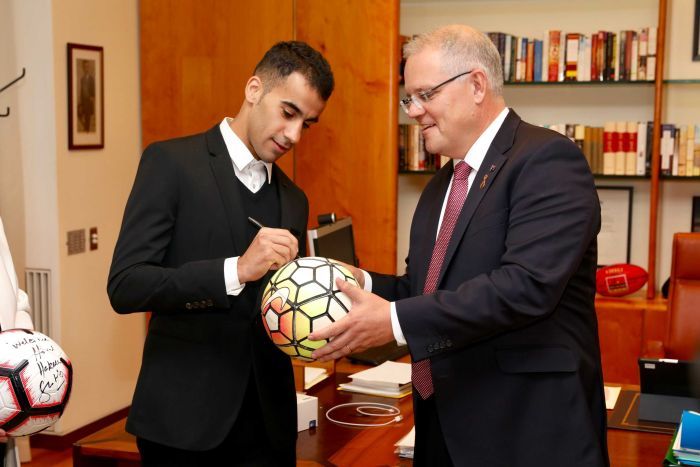 The 25-year-old met with the Prime Minister in Canberra on Thursday, two days after returning to Australia having spent more than 70 days in a Thai prison.

“It’s wonderful to have you here, I know it’s been a trying time for you,” Mr Morrison said.

We are so pleased you are here now and that you can come and live your life here in Australia.”

The Prime Minister said he hoped to see Mr Araibi at a citizenship ceremony soon, adding: “I don’t think it’s too far away”.

Mr Araibi thanked the two, as well as former Socceroo Craig Foster, who helped lead the campaign to free him.

He looked forward to joining his semi-professional Melbourne club Pascoe Vale in a home clash with Bentleigh next Friday.

“Next week I’m back in training,” he said.

Mr Morrison gifted Mr Araibi a soccer ball, which he signed “welcome home Hakeem”, and asked the footballer to sign one for him.

Earlier in the day, Mr al-Araibi watched a friendly football match between politicians and professional players, including Foster and former Matildas captain Kate Gill on grounds next to Parliament House.

The soccer match had been planned as a demonstration of support for Mr al-Araibi when he faced indefinite detention. But instead, it became a celebration of his release, with Foster playing for Pascoe Vale in the match.

“We’re all very worried about him,” Foster said. “He’s obviously riding on incredible adrenalin and elation. I would imagine … in the next week or two or three, he’s going to need some help.

“He’s been through an incredible ordeal and I think that’s exacerbated by the fact that he was a torture survivor previously,” Foster added.

Labor MP Andrew Giles, who represents the Victorian electorate of Scullin where Mr Araibi lives, told the footballer he had written to immigration minister on his behalf.

Mr Araibi and his wife were honeymooning in Bangkok when he was arrested in November at the request of his birth country Bahrain, which was seeking his extradition.

He was wanted there after fleeing the country when charged with vandalising a police station in 2012. He had been sentenced to 10 years in jail in absentia.

Mr Araibi denied the crime, saying he was playing in a nationally televised soccer match at the time.

Under diplomatic pressure, Bahrain this week dropped the case, allowing Mr Araibi to return to Australia.

On his return to Melbourne, Mr Araibi openly declared his love for Australia.

“I don’t have citizenship yet but my country is Australia. I will die in Australia and I love Australia. Thank you very much,” he said.

Senator Derryn Hinch labelled Thursday’s events as “ironic”, coming a day after a bid for a parliamentary inquiry into Mr al-Araibi’s detention was blocked by Labor and the Coalition.

“Ironic watching Labor and Liberal senators lining up for photo op with Hakeem at P’Ment House today. Same people who yesterday voted against a Senate inquiry into how the hell he was in a Thai jail on Oz advice in the first place,” he tweeted.

The Coalition said there was no need for a parliamentary inquiry, but Labor is expected to pursue the issue at Senate estimates hearings next week.