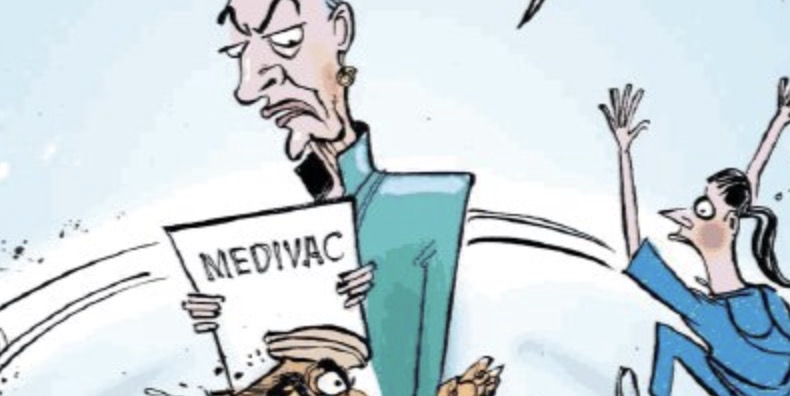 The Warren Brown cartoon that has attracted allegations of racism.

Another News Corp cartoonist is under fire for what has been described as a racist depiction of asylum seekers in Tuesday’s Daily Telegraph.

Warren Brown weighed into the debate on the medical evacuation of people from Manus Island and Nauru detention centres with a cartoon that depicted a crazed Arab chasing a white, female health professional.

It also shows key backer of ‘medivac’ laws, independent MP and doctor Kerryn Phelps, reading the bill while telling the ‘refugee’ “do you mind not doing that until I’ve got the bill passed”.

Late on Tuesday afternoon, the cartoon had yet to appear on The Daily Telegraph website or Brown’s social media platforms.

Online, the criticism was scathing, with many posters on Twitter noting that News Corporation has form in depicting racial stereotypes.

Brown is a former Top Gear Australia presenter and has had regular appearances on the ABC’s Insiders program.

The latest controversy comes after veteran Herald-Sun cartoonist Mark Knight rejected suggestions last September that his depiction of American tennis champion Serena Williams was racist, saying those condemning him were “making stuff up”.

HIs contentious cartoon came after Williams lost to Japan’s Naomi Osaka after being given three code violations. Mr Knight’s cartoon shows Williams stamping on her racquet with a dummy on the ground and the umpire telling Osaka, “Can you just let her win?”.

To date there has been no Press Council adjudication on complaints made about that cartoon.

In 2016, the late cartoonist with The Australian, Bill Leak escaped sanction from the Press Council over a cartoon depicting and Aboriginal father unable to recall his son’s name.

The Press Council has been contacted for comment as has The Daily Telegraph editor Ben English.