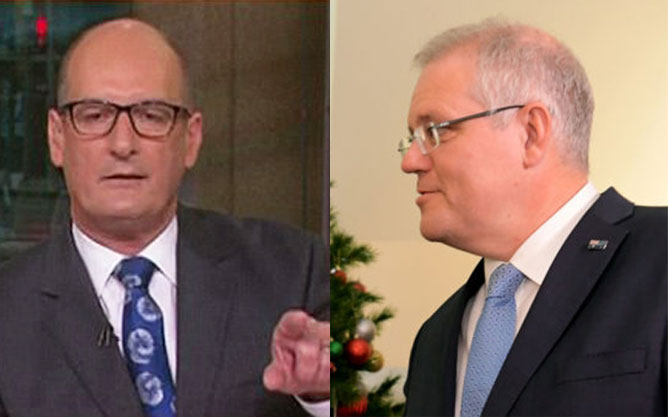 Scott Morrison was accused of "scaremongering" over claims a Labor government would cause a recession.

Scott Morrison’s claim that Australia risks a recession under Bill Shorten has been rubbished on Sunrise with the Prime Minister accused of “scaremongering”.

The Prime Minister and Sunrise host David Koch clashed over the claim ahead of a major economic speech in Brisbane where Mr Morrison pledged to help create 1.25 million jobs over the next five years.

But Mr Morrison also warned that half of all Australians of voting age have never experienced a recession.

“I do not want Australians to learn just how important a strong economy is to each of them, by enduring the cruel lessons of a weaker economy under Bill Shorten and Labor,” he said.

But in a testy exchange, the finance expert Koch challenged Mr Morrison over Labor’s economic record and government debt.

“You are scaremongering though aren’t you when you say that Australia will go into recession if Labor is elected?,” he asked.

‘Well, I didn’t say that. What I said, is there will be a weaker economy under Labor than there will be under my government,” Mr Morrison replied.

“It would be a weaker government because they going to put $200 million of higher taxes on the Australian economy,” the Prime Minister claimed.

“It will be a sheet anchor on the Australian economy when we can least afford it. The troubles and the storm that we go to in this year are far greater than they were last year,” he said.

“Labor is putting hundreds of billions of dollars in higher taxes on the economy can only slow down.”

The Sunrise host then said Labor were “good economic managers” under the Rudd-Gillard years.

“They’ve been pretty good. I know it is un-Australian to acknowledge anything that a politician does well, but Labor were good economic managers back in the Global Financial Crisis. They kept us out of the recession,” Koch said.

“I’m sorry. I am sorry. No. I can’t agree with that. That’s when they ran up the debt and the deficit and poisoned our budget,” he replied.

“They put our AAA credit rating at risk. I’m sorry, David. The reason we came through that is because our banks were strong. You can’t trust Labor with money. Australians knows that.”

But Koch refused to concede.

“Well. I am just quoting The Economist magazine in London and it gives both sides of politics a five star rating on economic management,” he said.

Prime Minister @ScottMorrisonMP is promising to create one and a quarter million new jobs if the Coalition is re-elected. #auspol pic.twitter.com/yvTnDg5NtM

Bizarrely, that response then prompted the Prime Minister to appear to praise Paul Keating – who presided over Australia’s last recession –for his economic management.

Mr Morrison also defended the resignation of three cabinet ministers in a week, arguing that “it has been less than” at previous elections.

“Labor Party members have resigned and are not contesting for family reasons. We’ve got Tim Hammond in Western Australia,” he said.

Mr Hammond resigned in May, 2018, sparking a by-election in the seat of Perth, now held by Labor’s Patrick Gorman.

Asked if Julie Bishop had given him an “absolute guarantee” that she won’t quit, Mr Morrison was equivocal.

“Julie said to me at the time, when I became Prime Minister that she didn’t want to serve in the cabinet and we took that decision then,” he said.

“She said she was intending to contest the next election and hasn’t told me anything different since.”

Mr Morrison was then asked if he supported Mark Latham’s call for a burqa ban.

“I’ve never been for making hard laws about how people go about their lives and what they wear,” he said.

“That’s not something we’ve supported. This issue I know it generates a lot of heat and light before an election. I think people need to look at it in that context.”