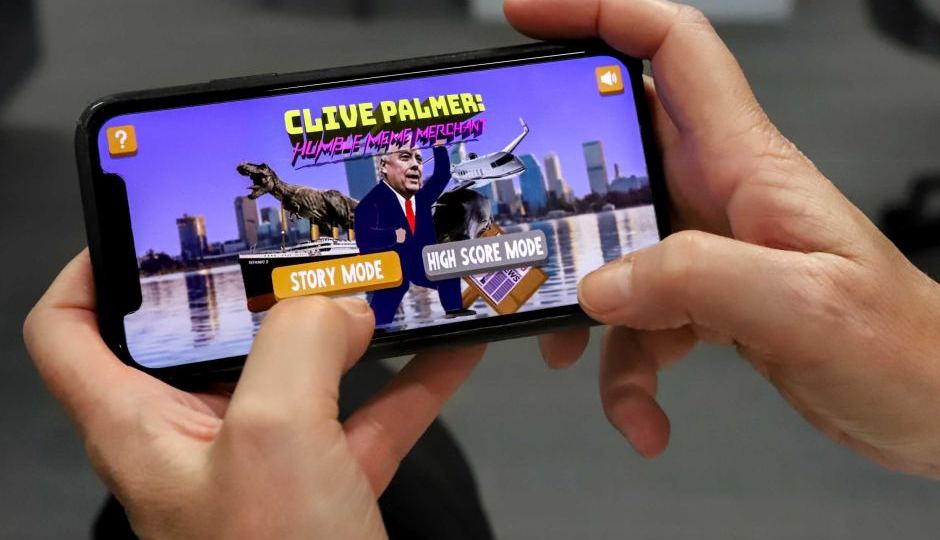 It’s gimmicky, crude and more than a little transparent in its intent, but Clive Palmer’s mobile app has also unwittingly exposed a blind spot in Australian politics.

The brash political outsider’s attention-seeking app ‘The Humble Meme Merchant’ is presented as a satirical takedown of his political rivals, but embedded within it is the potential to track and harvest valuable voter information.

Tom West is the brains behind Clive Palmer’s recently released campaign gaming app, which he said has been downloaded more than 30,000 times since its launch two weeks ago.

“It’s been an incredibly exciting few weeks since it came out,” Mr West said from Bali, where he is on holidays after a busy few months getting the app ready for release.

Now an “oversight” in how the game was developed looks set to again draw attention to Mr Palmer’s regard for voters’ privacy, following his party’s mass text messaging campaign over the past month.

The app includes a feature allowing it to track the location of users who have downloaded it to mobile phones with Google’s Android operating system.

The game’s download page on Google’s app store, Google Play, reveals it can also access users’ identity – which can include their names and Google email addresses – and the memory on their phones.

It’s the sort of data and information political parties crave.

Mr West, who has never developed an app before, said the features were not switched on and insisted the game was not designed to harvest users’ personal data.

“This app does not track anything whatsoever,” he said.

The best way that people can actually go and check that on their Android device is to go into the settings, and app permissions, and they can see that the app has not requested access to anything.”
Tom West, app developer

“To actually access that information, we have to ask the user – which we don’t.”

The Humble Meme Merchant is a low-tech, arcade-style video game, where users play as Clive Palmer to overcome crude representations of politicians like Bill Shorten and Christopher Pyne, collecting chocolate biscuits as they go.

Mr West said he built the app using a software template and the location tracking function was accidentally included as a default setting on the game when he exported it to Google Play.

He said the function was not included on the Apple iPhone version of the app.

Since being contacted by the ABC, Mr West has begun working on an updated version – with the location tracking and identity access permissions removed.

“I’ve actually already removed it from the code base, but I didn’t want to remove them before this interview because it would seem a bit disingenuous if they suddenly disappeared before we discussed them,” he said.

Mr West’s company Emu War Games, which he operates from a co-working space in inner-Sydney, has nonetheless left the door open to collect data on users in the future.

“We collect your personal information for the primary purpose of providing services to you, proving information to our clients and marketing,” the policy states.

Mr West said the privacy policy was part of the requirements of releasing an app on for Apple and Android devices.

“That privacy policy is a stock standard one, straight from the internet. The main reason we have it in there is too keep Google and Apple happy,” he said.

Clive Palmer declined requests for an interview and his party did not respond to questions about the game.

“No information has been collected,” his spokesman, Andrew Crook, said in an emailed statement.

The app has also drawn the ire of no-less than popstar Boy George, whose management was “horrified” to learn the popstar’s 1983 Culture Club hit Karma Chameleon is reinterpreted as a song in the app. It reworks the song’s lyrics with lines like “Palmer’s worth a billion … he’s got 12 boats and he needs your votes.”

Mr Palmer’s United Australia Party has this month prompted thousands of complaints to the Australian Communications and Media Authority (ACMA) over a series of texts promoting its policies for this year’s federal election.

“The texts sent are fully compliant under legislation approved by the Liberal and Labor governments,” Mr Palmer’s statement said.

What the actual eff? #auspol pic.twitter.com/mQ08h7AMDs

“The United Australia Party has received strong levels of support as a result of these texts from Australians who are fed up with the raw deal they are getting under the Liberal/Labor duopoly.”

The texts have triggered a renewed debate about how political parties use voters’ personal information to target them with campaign messages.

But even if the location tracking function was activated on Mr Palmer’s game, it is unlikely the United Australia Party would be in breach of any privacy or electoral rules.

David Vaile, chair of the Privacy Foundation, said political parties are exempt from the Privacy Act, which gives citizens control over how their personal information is collected, how it is used and whom it is shared with.

“In other countries, particularly in the European Union, individuals have rights to sue if their privacy is breached and there are very clear rules about what apps can and cannot do,” Mr Vaile said.

In a statement, the Australian Electoral Commission said there was nothing in the Electoral Act that regulates political mobile applications for data mining.

Voter data will continue to be targeted

The Liberal Party is expected to use political campaigning software i360 in this year’s election after rolling out the technology to target voters in the South Australian and Victorian elections.

The software was developed for the Republican Party in the US with the backing of conservative financiers the Koch brothers.

Meanwhile, multiple parties including Labor, the Liberals, Greens and the Nationals use US-based political software NationBuilder to manage voter information and campaigns.

David Vaile believes political parties should be more transparent about the data they collect and how they use it.

“We don’t know what they’re collecting – we just get glimpses occasionally,” he said.

“[Political parties] need to be transparent.”