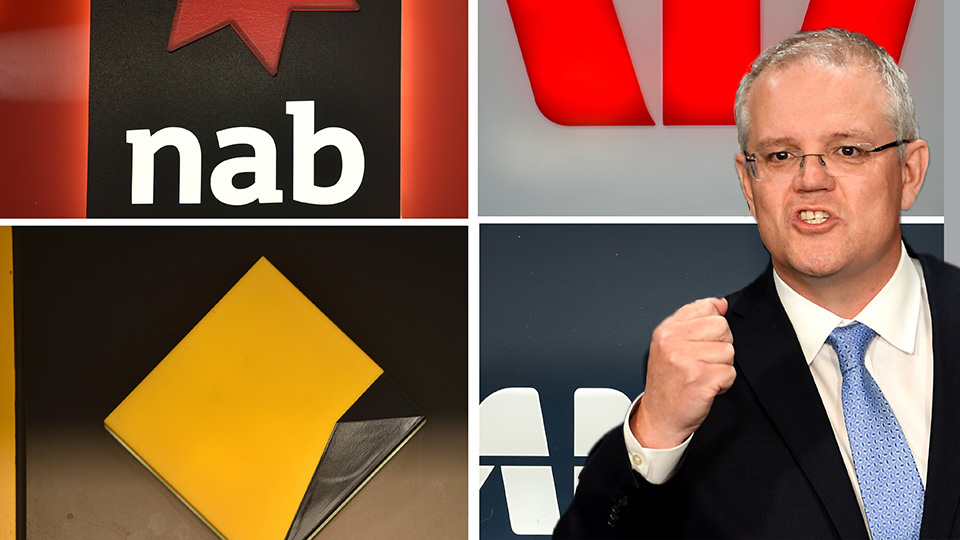 Scott Morrison has been revealed as the "last holdout" into establishing a royal commission into banking. Photos: Getty
exclusive

Scott Morrison was the “last holdout” against calling a royal commission into the big banks, according to insiders in the inner sanctum of Malcolm Turnbull’s economic team.

As the Prime Minister prepares to craft the government’s response to the final report of the Hayne Royal Commission, Liberals have warned Mr Morrison’s deep opposition to the royal commission is a ticking time bomb for him.

Senior government figures have confirmed the former prime minister Malcolm Turnbull was first to move, incensed the government looked “ridiculous” when they were the last ones defending the big banks when even they had accepted the inevitability of the inquiry.

“His view was, ‘Why are we the only people out there defending the banks when even the banks accepted the need for a royal commission?’,” a government source said of Mr Turnbull’s attitude.

“I can guarantee you that Scott Morrison was the last holdout.”

In private talks with the economic team, Mr Morrison warned against the establishment of the inquiry. He spoke of the “reputational damage” to the government, given Labor had months of quotes from senior government figures, including himself, decrying the idea as a waste of money.

Sources close to Mr Morrison insist that his warnings of “reputational damage” are accurate, but insist others in cabinet remained opposed to the royal commission plan, even after he backflipped and took the position to cabinet.

Mr Morrison was highly exposed because he had described the royal commission as “a stunt”, “hot air” and a move that would undermine confidence in the financial system.

When he finally announced a royal commission in November 2017, he described it as “regrettable but necessary”.

The timeline to a commission

The senior economic team of the Turnbull government – including Mr Turnbull, Mr Morrison, finance minister Mathias Cormann and assistant treasurer Kelly O’Dwyer – spent months discussing how to resolve mounting pressure from Coalition MPs to call a royal commission outside of discussions in cabinet.

Government sources say Ms O’Dwyer was first to accept the need for some form of inquiry with the finance minister ultimately accepting the need for a circuit breaker.

But other ministers disputed this.

“Bulls–t. It was imposed on them by the prime minister,” a Liberal minister said.

The government’s backflip on a royal commission was ultimately informed by the threat of backbenchers, including Nationals MP George Christensen, to cross the floor.

On November 20, 2017, Mr Christensen formally advised the government he would vote with Labor. The government had struggled for months with how to respond to Labor’s calls for a royal commission, including considering alternatives such as boosting the powers of ASIC.

Just 10 days later, the big four banks finally caved to the political pressure and agreed to support a royal commission.

They feared Parliament would set the terms of reference, which could prove even more damaging, unless the Turnbull government seized control of the process.

On November 30, 2017, then-PM Turnbull and Mr Morrison announced the royal commission, arguing the ongoing uncertainty was harming confidence in the banking system and the economy.

“Only the government can ensure that a royal commission is created, established with respected and capable commissioners,” Mr Turnbull said.

“This will not be an open-ended commission. This will not put capitalism on trial, as some people in Parliament prefer, and we give it a reporting date of 12 months.”

The backflip only came after Mr Morrison received a letter signed by the chairpersons and CEOs of ANZ, Commonwealth, NAB and Westpac, arguing an inquiry was necessary to restore faith in the system.

“Our banks have consistently argued the view that further inquiries into the sector are unwarranted,” the letter stated.

“However, it is now in the national interest for the uncertainty to end.”

“The nature of political events means the national economic interest is now served by taking what I describe as a regrettable but necessary action,” Mr Morrison said.

At the time, rebel MPs including Mr Christensen said it was a pity the government had to “drag the prime minister kicking and screaming to this decision”.

Shadow Treasurer Chris Bowen said the revelations that Mr Morrison was “the last holdout” on the royal commission was proof he was unfit to be Australia’s prime minister.

“This is just the latest reminder of why Scott Morrison isn’t fit to be prime minister and is certainly not fit to be overseeing the response to the royal commission,” Mr Bowen told The New Daily.

“Australians will be rightly concerned to see more of the details of how Scott Morrison was the last person resisting a banking royal commission.

“Not only did he vote 26 times against holding a royal commission, but he actively and behind the scenes fought tooth and nail to stop it.

While most Australians, and even many Liberal MPs, now support the decision to hold an inquiry, one Liberal MP – who asked not to be named – does not.

“We have basically got a credit strike,” he said.

“It’s not just the royal commission, but it has added fuel to the fire.

“Banks don’t want to lend money. Banks are saying, ‘F–k that’. It was a mistake we crumbled at the time.

“What have we found out? That AMP was charging dead people? Well, we knew there was something crook with AMP already.

“It hasn’t been good for the country.”

Here’s a selection of dialogue from Mr Morrison before and throughout the banking royal commission, as told to media across the country.

“I don’t know what the royal commission is apparently into, but sadly neither does Bill Shorten. It is nothing more than a populist whinge from Bill Shorten.”

“What a royal commission does is pump Bill Shorten’s tyres up, but doesn’t give anybody anything if at all for years. So, that is a political exercise for a political hack.”

“I would describe it as a cynical exploitation of people’s genuine concerns and the politicisation of their pain by Bill Shorten.”

“This royal commission proposal is about one person and one person only: The leader of the Opposition.

“This is all about pursuing his crass populism and undermining an institution that is critical to our economy, and he has no proposals. He would rather spend $51 million going through an exercise for several years, when he could spend that and announce that he wanted to spend that on ASIC. But, no, he wanted the stunt. He is the stunt master.”

“I note what the former governor of the Reserve Bank and former Treasury secretary Bernie Fraser said. He said: ‘I think there are real problems, but I wouldn’t myself be rushing into a royal commission at this stage, mainly because I think the basic problems are pretty clear. But more importantly, because it would take so long for a royal commission to get the point of recommending. What they have is hot air’.”

“So why is it that, instead of taking the wise advice of the member for Lilley, the leader of the Opposition is proposing a royal commission whose terms of reference is a blank sheet of paper. There are no terms of reference. There is nothing more than crass populism seeking to undermine confidence in the banking and financial system, which is key to jobs and growth in this country.”

Scott Morrison was the last frontier before the banking royal commission, sources reveal