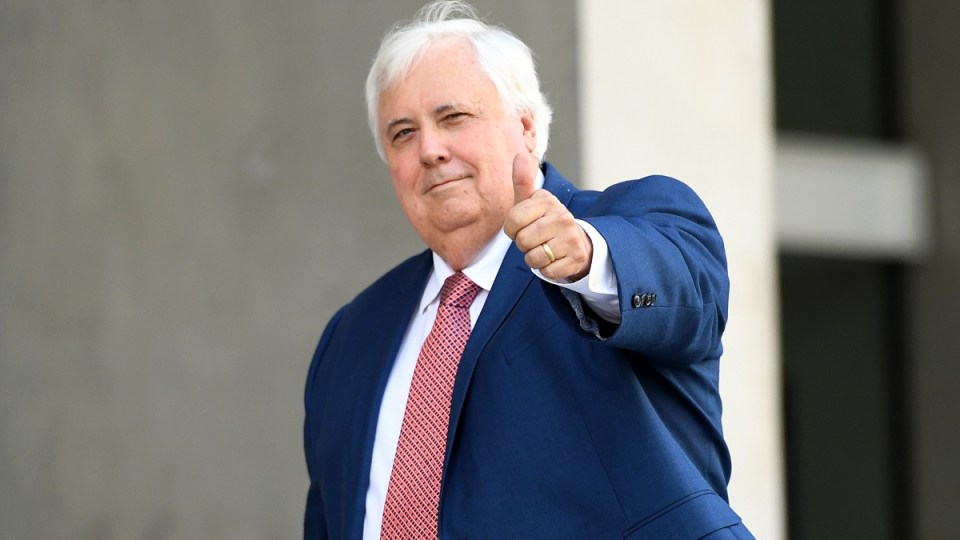 Clive Palmer has transferred ownership of his mining company to an NZ holding company. Photo: AAP

Clive Palmer has channelled his corporate empire through New Zealand and threatened to use free trade rules to sue Australian taxpayers for $45 billion as part of a dispute with a Chinese mining company.

Mr Palmer, who has re-emerged as one of Australia’s richest people according to Forbes magazine, last month transferred the ownership of his flagship Mineralogy company to an Auckland-based holding company.

That company, Mineralogy International Limited, last week flagged using investor protections under the trans-Tasman free trade agreement to claim $45 billion in damages from the Commonwealth if the Western Australian government intervenes against Mr Palmer in his latest dispute with Chinese state-owned Citic.

Those companies have registered offices in Brisbane and were previously direct shareholders in Mineralogy.

MIL chairman Chitondo Mashayanyika, one of three MIL directors along with Mr Palmer’s daughter Emily, is the former general manager of the Palmer Coolum Resort and is based in Mango Hill in Brisbane’s north.

MIL’s registered Auckland office is an address that has been advertised as a “co-working space” where tenants can rent a single desk “in a shared office environment”, with private offices also available.

Mineralogy has previously spent at least $4 million on Mr Palmer’s political party. His spokesman Andrew Crook told the ABC “Clive the individual and others are contributing to the [current] campaign”.

Mr Crook said Mr Palmer was busy meeting UAP candidates and not available to speak to the ABC.

Last week Forbes revealed the businessman was back on its 2019 Australian rich list with a $1.8 billion fortune.

That came partly courtesy of a $200 million royalty windfall after a court ruling in his favour in a long-standing stoush around the WA iron ore venture Sino Iron, operated by Citic on a mining lease owned by Mineralogy.

WA Premier Mark McGowan has threatened to pass laws removing Mineralogy’s veto power over planned expansions by Citic, which claims Mineralogy is putting 3000 jobs and the project’s viability at risk by blocking its proposal.

“If your government proceeds with amending legislation, MIL will immediately make a claim for $45 billion against the Commonwealth,” Mr Mashayanyika said.

He said Mineralogy was receiving $280 million a year in royalties from “Chinese Communist Government owned [Citic]”, which would ramp up to $500 million a year for a 50-year project.

Mr Mashayanyika accused the WA Government of having succumbed to “exclusive lobbying by Sino Iron” and warned “if you and your government fall for the Chinese government’s tactics, you will have allowed them to access Australian iron ore for free”.

“It cannot be a proper purpose to take from an Australian asset and in effect give it to a Chinese government-owned entity for a commercial purpose for that party to exploit,” he said.

The Australia-NZ Closer Economic Relations Trade Agreement forces both countries to pay fair and prompt compensation to investors who are deprived of their assets “either directly or indirectly”.

However, either government can “expropriate” assets if it does so “for a public purpose, in a non-discriminatory manner, on payment of prompt, adequate and effective compensation (and) in accordance with due process of law”.

Mr Palmer told the Australian newspaper that “Mark McGowan would be making the taxpayer of Australia pay for this”.

He said he had “invested in New Zealand and I’ve encouraged that New Zealand company to invest in Australia, which it has”.