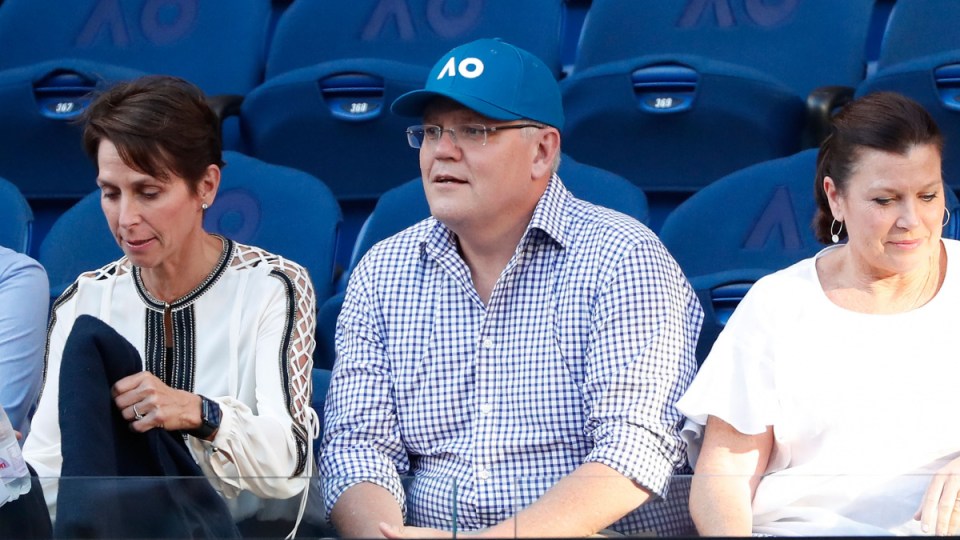 The PM was happy to watch the fourth-round match between Roger Federer and Stefanos Tsitsipas on Sunday. Photo: Getty

Scott Morrison has returned serve to the masses who booed him at the Australian Open on Sunday, saying it’s a “great tradition”.

Watching Roger Federer go down to Stefanos Tsitsipas at Melbourne Park, the PM’s face flashed up on a giant screen as he oohed at a close line call.

The capacity crowd reacted loudly and negatively but the Prime Minister, who nursed a beer during the match, joked on Monday that people were probably protesting about the line call.

“It’s a great tradition,” he told reporters in Cairns of his hostile reception.

“I would be disappointed if they didn’t. Bob Hawke and everyone else got the same treatment at games.”

While Mr Morrison seemed confident of his position, the crowd reaction to his face wrong-footed Nine’s tennis commentator John McEnroe.

He had to ask colleague Todd Woodbridge what the crowd was booing.

McEnroe, for once, was lost for words: “OK.”

Bee at least we know MSM isn’t working – Morrison at the @AustralianOpen & McEnroe ask why the crowd are booing….

“Booing #ScoMo @AustralianOpen – of course. That’s the tradition for an unpopular PM attending a popular event trying to be popular,” one tennis viewer posted to social media.

“Best back hand of the night,” wrote another. Said a third, “Sometimes we get s–t right in Australia.”

People who had missed the moment or wanted to relive it made public pleas for access to footage.

Hello is there footage of Scott Morrison being booed at the tennis? I need a feel good short film to watch 🎞

The moment came hours after Mr Morrison – who brought wife Jenny and daughters Lily and Abbey to the day session to watch Ashleigh Barty defeat Maria Sharapova – put his foot in it at Melbourne Park.

He took to the court wearing RM Williams riding boots with a business shirt and ill-fitting baseball cap to play a few shots.

Hard-soled shoes are usually banned on tennis courts and Melbourne Park’s website says “appropriate” athletic footwear is a must for casual court hirers.

As for the veracity of Mr Morrison’s claim that previous PMs have been booed at sporting events, certainly Tony Abbott copped a verbal barrage at the 2014 NRL grand final.

Kevin Rudd scored the same treatment in 2010 when his face was shown on the big screen, also at an NRL game between Canberra Raiders and Brisbane Broncos.

As was pointed out, Mr Rudd is a Broncos fan and thus lacked a home ground advantage, but he didn’t have the same excuse when fellow Queenslanders gave him a pasting at a 2013 game in Brisbane.

John Howard was a regular magnet for booing by fans of various codes, with his tactic just to keep watching and smiling blithely.

As for Mr Hawke, while he did generate verbal reaction from sports crowds, they were generally cheering, not jeering.

In a video of the former PM skolling a beer at the SCG in 2012, those around him can be heard losing it with joy at his manly powers and thirst.

‘Great tradition’: Scott Morrison is proud to be booed at the tennis