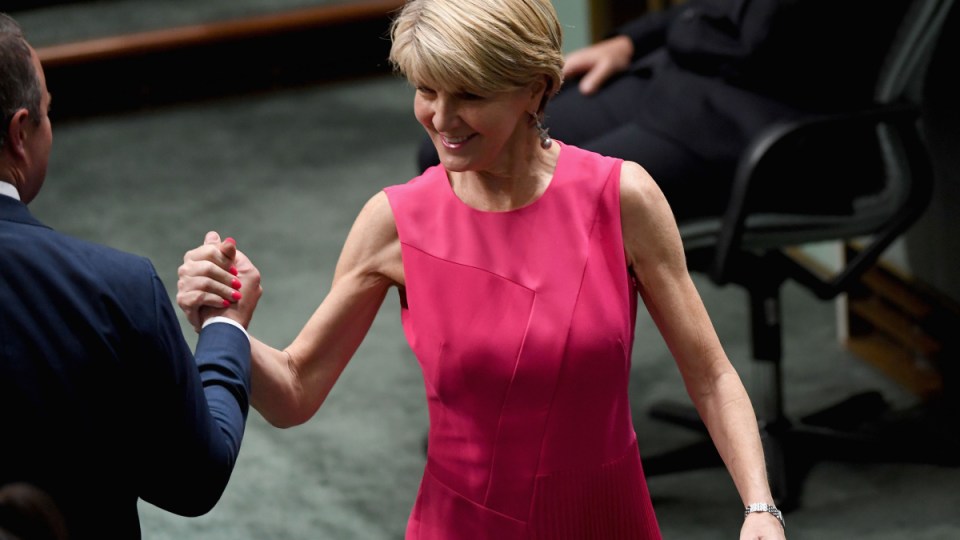 Julie Bishop at parliament late in 2018. She has declared she will stand again at this year's federal election. Photo: Getty

Julie Bishop has declared she will contest the next election, denying rising speculation she will abandon a sinking Coalition ship.

Just days after the resignation of Kelly O’Dwyer, the former deputy leader has issued a statement insisting she’s not going anywhere.

“I am pre-selected as the member for Curtin and it is my intention to run,” she said.

In political life, where every word is carefully examined for meaning, her “intention” could change.

But with speculation running rampant she will quit before the 2019 election, Ms Bishop has chosen to remind anyone circling her seat that she doesn’t intend to vacate it for now.

Curtin, held by a margin of 20.7 per cent after recent redistributions, is one of the Liberals’ top three safest seats.

There has been speculation that Attorney-General Christian Porter might wish to move into Curtin to save his political career ahead of an expected electoral wipeout. But Ms Bishop is suspected of being not keen to save the man who backed a leadership challenge against Malcolm Turnbull.

If Ms Bishop does remain in Parliament, pressure will intensify to find a position on the front bench for the nation’s most high profile and experienced female backbencher.

She would also be eligible to contest the leadership after what is expected to be a historic election loss, although there’s no sign the Liberals left standing would have a huge appetite for more leadership churn.

Ms Bishop has spent the summer attending former Today host Karl Stefanovic’s wedding in Mexico, the polo and spending time on Wild Oats, from where she was sensationally ejected into the sea before the yacht continued its journey to Hobart.

On Sunday, Prime Minister Scott Morrison denied he was facing a mass exodus of MPs, jumping ship before a likely election loss, after the resignations of David Bushby and Ms O’Dwyer.

The PM cited the example of Labor’s Tim Hammond, who announced his resignation from Parliament last year.

“I’m not concerned about that at all. That is not what has driven the decisions. If it is OK for a Labor bloke from Western Australia to say that he is not going to contest the next election because of family decisions, then it should be all right for Kelly O’Dwyer,” he said.

“I, frankly, was a bit disappointed yesterday with some of the churlish behaviour of Brendan O’Connor. Even Bill Shorten’s office was sledging Kelly O’Dwyer yesterday on social media. I thought that was pretty ordinary.”

On Sunday, unions were forced to distance themselves from social media posts by “Union News Australia” that used an image of Ms O’Dwyer with the words “Bye, bye bitch”.

‘It is my intention to run’: Julie Bishop won’t quit