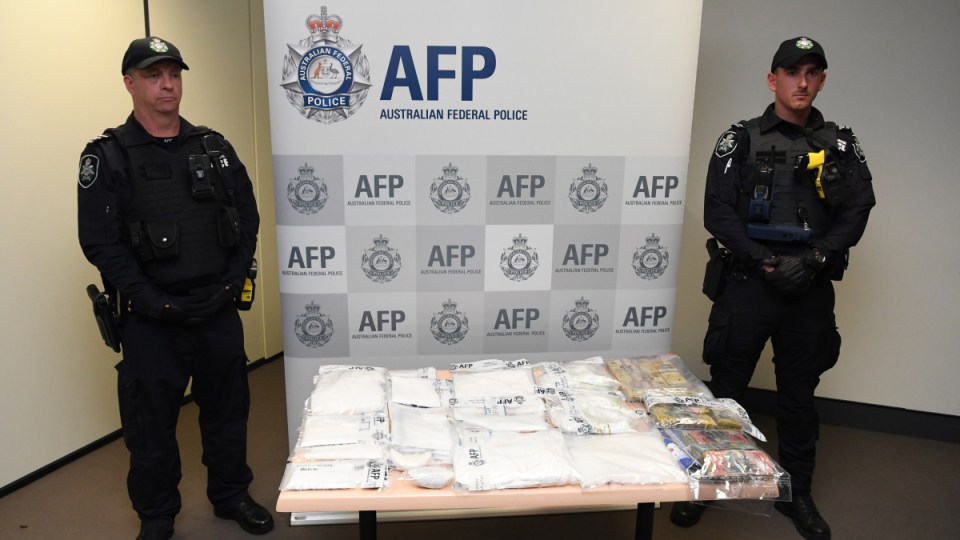 Police display the drugs and cash seized in the operation. Photo: AAP

Two international airline staff are among eight people arrested over a major drug importation operation into Melbourne and Sydney.

A Malindo Air cabin crew employee and another airline staffer allegedly smuggled the drugs on their bodies as part of their involvement in a Melbourne-based Vietnamese organised crime syndicate.

They were among eight arrests in Melbourne over the past fortnight, as part of a joint police operation targeting the syndicate, which allegedly imported more than $20 million of illicit drugs into Australia from Malaysia.

She said the the syndicate had been operating at least five years and the complex investigation is ongoing.

Over the past eight days, seven properties across Richmond, Southbank, Abbotsford, Sunshine North and Melbourne were raided by police.

Officers seized six kilograms of heroin with a street value of $14.5 million, eight kilograms of methamphetamine worth $6.4 million and half a kilo of cocaine.

Investigators also seized a Porsche Macan, a Mini Cooper and a significant quantity of cash.

Four women and four men were charged and faced Melbourne Magistrates Court. Six were remanded to reappear in May while two were bailed.

The alleged offenders are linked to the trafficking of at least six kilograms of high-grade heroin and eight kilograms of methamphetamine during the five-month operation.

Ms Walsh said the syndicate was well organised and its dismantling is a significant win for police and the Victorian community.

“The amount of heroin alone involved in this investigation amounts to almost 50,000 hits in real terms,” she said.

“We know the harm that drugs bring – not just the physical and health impacts on users, but the negative flow-on effects to the broader community such as property crime, assaults and drug-driving.”

Australian Border Force regional commander Victoria, Craig Palmer, said any attempt to bring drugs into the country would be met with the full force of Australian border and law enforcement agencies – before, at and after the border.

“Airline staff are not above the law. They are subject to intervention at the border like everyone else and face significant penalties if they are found to be using their positions to attempt to circumvent our border controls,” he said.

The operation, which began in August, was conducted by a joint taskforce involving AFP, Victoria Police, Border Force and the Australian Criminal Intelligence Commission, with help from the Victoria Police Drug Taskforce.